Trump: I’ll be having a chat with the CDC about their very strict guidelines for reopening schools 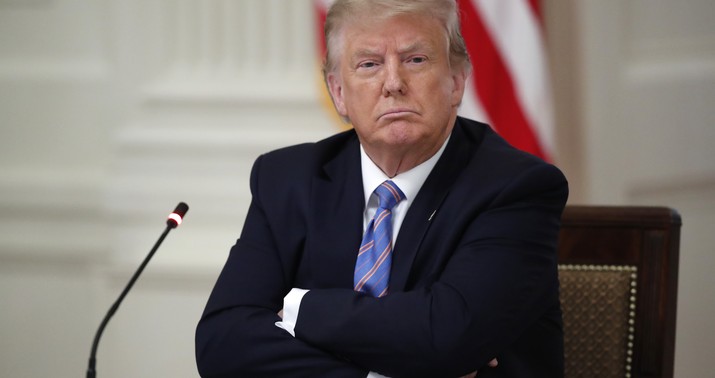 He has the right instinct in wanting to give it a go with schools this fall.

But as has happened so many times during his presidency, by expressing that instinct in the Trumpiest possible way, he’s going to end up alienating people who might otherwise agree with him.

Start with this graph from a Pew poll last month:

It should not be the case that the CDC is America’s most trusted coronavirus authority given how abysmally they’ve performed since the start of the pandemic. But they amassed decades of goodwill among the public before COVID-19 struck, and many people don’t follow the news closely enough to know how badly the agency botched testing during the critical period in February and March when we might have been able to contain the epidemic. For better or worse, the CDC has public credibility here. More so than the president does.

So here’s the president picking a fight with the CDC over who knows best on when and whether schools should reopen:

In Germany, Denmark, Norway, Sweden and many other countries, SCHOOLS ARE OPEN WITH NO PROBLEMS. The Dems think it would be bad for them politically if U.S. schools open before the November Election, but is important for the children & families. May cut off funding if not open!

I disagree with @CDCgov on their very tough & expensive guidelines for opening schools. While they want them open, they are asking schools to do very impractical things. I will be meeting with them!!!

Here’s the first problem with that reasoning:

There’d be less anxiety about reopening schools if America was experiencing case counts more like Germany’s. Even Fauci said yesterday that he supports reopening schools in communities with lower spread. Pointing to Europe and saying “Why can’t we be like them?” invites the answer: Because we haven’t been like them. The time to worry about how parents might react to sending their children off to school this fall amid a raging epidemic was back in April, when Trump was insisting that we reopen businesses early despite the risk that it might seed that epidemic. Now we are where we are, and where we are isn’t where Germany is.

The second problem is his instinct to threaten other politicians in order to get his way, in this case by potentially depriving states of funding if governors don’t do what he says. People like Cuomo and Gretchen Whitmer will respond to that the same way they responded in the spring when he started musing about forcing them to reopen businesses. They’re going to laugh in his face because they know they’re more popular and more trusted locally than he is. Most of the public will side with them. Worse, Trump’s heavy-handedness might breed suspicion among parents in states where schools *do* reopen that they’re not being reopened because it’s safe for their kids, rather they’re being reopened because the president compelled it. Some parents will react by keeping their children home — even if it’s actually safe on the merits for them to attend. Trump will have defeated his own purpose because of the way he approached this.

The fact that he’s being so heavy-handed at a moment when cases nationally have never been higher only further damages his cause. Now is a moment for humility, or whatever emotion Trump is capable of that’s closest to that. Recognize that parents are terrified that their kids — and eventually themselves — might be infected if schools reopen. Reassure people that safety will come first. Emphasize that distance learning and long-term isolation at home have their own deleterious effects on children’s health. Instead this guy once again instinctively resorts to going full Trump, up to and including threatening to strong-arm America’s infectious disease experts into relaxing safety guidelines in order to get kids back to class. He doesn’t even specify which guidelines he finds too “tough.”

Is he trying to undermine public faith that schools will be safe when they reopen? If not, what’s his plan for making sure that schools will have PPE and other expensive precautions they might need to give parents some confidence that health is a priority? Experts have been chattering for weeks that there isn’t much time left for the feds to fund everything that might be needed to reopen safely on schedule. The White House “plan” seems to be nothing more than having the president hoot at people that if they don’t reopen they’ll be stripped of funding. Which is in keeping with their overall “learn to live with it” approach to the virus now.

On top of everything else, if he does succeed in pressuring some red-state governors to reopen schools before safety measures are in place and there’s an outbreak at a school, he’ll own the backlash. He already owns some of the backlash for the outbreaks in southern states that reopened businesses early, but adults having to pay the price for his electoral agenda is one thing, children having to pay it is another. Maybe it won’t happen: Kids, especially younger kids, might be so naturally resistant to the virus that there’ll be no contagion at schools. Then he can take an “I told you so” victory lap. But he’s betting his presidency on it, now that he’s gone all-in on using threats to get schools open ASAP.

I feel like we’ve seen this movie before. Here was Deborah Birx just yesterday:

“The South, which didn’t experience a significant outbreak through the March-April timeframe, I think came at this opening in a different way than the Northeast or the Midwest that had experience with the outbreak,” Birx said.

According to Birx, the surge in coronavirus cases can be linked to how quickly the South reopened.

“And so when they opened, instead of gating closely through all of the recommended gates, a lot of individuals and a lot of businesses instead of driving 25 in a 25 mile an hour zone, stepped on the gas and started going 65, and it’s really evident now in the spread of cases across most age groups,” Birx said.

That’s the head of White House’s coronavirus task force warning the country to follow the federal guidelines if they want to safely reopen things like businesses and schools. And now here’s her boss 24 hours later declaring his intention to have the guidelines rewritten in order to hurry along further reopenings. Amazing. There’s a theory among some Never Trumpers that the president is actively trying to lose the election for whatever weird reason; I don’t buy it, but I confess that at moments like this I wonder if there’s something to it.

Anyway, local governments call the shots here, just as they did with reopening businesses, and the White House will end up having to acknowledge it (just as they did with reopening businesses). Watch Betsy DeVos speaking earlier this afternoon about that, insisting that schools must reopen but that local governments obviously have great flexibility in how that happens. Cuomo laughed at her and Trump on Twitter a few hours ago, saying, “The federal government does not decide if NYS schools reopen — the state does. We will make that decision based on the science and the data.” He knows the White House isn’t going to follow through on its threats.

Update: This should go over spectacularly well. Per NBC: “NEWS: The White House plans to issue its own guidelines for the reopening of schools because officials now say the ones released earlier this summer by the Centers for Disease Control are too restrictive, a senior administration official tells @carolelee and @PeterAlexander”

Education Sec. DeVos on schools reopening in the fall: “Ultimately, it’s not a matter of if schools should reopen. It’s simply a matter of how. They must fully open and they must be fully operational.” pic.twitter.com/W7aHwS2U2n