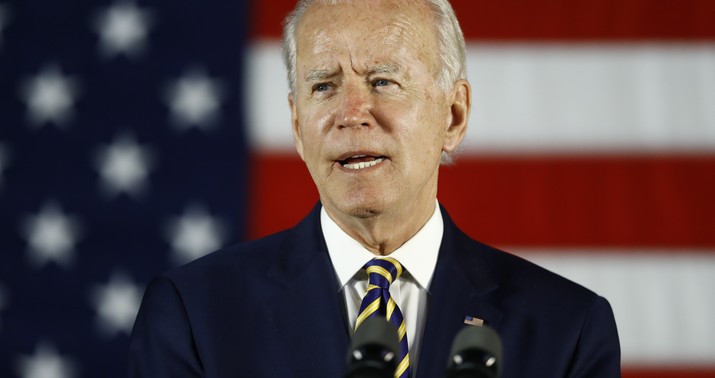 The funniest thing about this piece is that Gregg was no fire-breathing populist conservative as a senator, the sort of politician whom you’d think might be more willing to entertain a conspiracy theory involving Democrats. He was a RINO from New Hampshire. He was so moderate that Obama nominated him to be Secretary of Commerce in the first months of his presidency, although Gregg subsequently withdrew before confirmation.

Reading it feels vaguely like finding out that Susan Collins had joined QAnon.

Is this the first time someone has floated this particular idea, by the way? It’s the first time I’ve seen it. You would think Trump and his allies would have hit upon it months ago as a way to signal-boost their message that Biden as president would be a captive of the left. Not only will the left own him, Trump might say, they’ll replace him a few months into his term. We only think we’re electing President Biden.

What if we’re electing President Harris?

The path to total control is clearly there once they have the vice presidency.

It is the 25th Amendment.

Within a few months of assuming the presidency, Biden may find himself being the next statue toppled as the socialist/progressive movement moves closer to power…

The Cause will have been completed.

Power will be fully in the hands of the statue-removers, the social justice police and those who see America’s political history as basically evil. Socialist/progressive excess will govern.

It will be a coup.

Really, I’m just glad the new-ish political literary genre of “far-fetched 25th Amendment scenarios” will carry on until the next administration. We had a rash of them a few years ago among anti-Trumpers who were frustrated that the president still had many months left in his term, but they faded a bit as impeachment started to scratch the itch of ousting Trump early and they’re all but nonexistent now that Election Day is on the horizon. No matter what happens in November, they’re destined to resume next year. Either Trump wins and the quest to remove him through non-electoral means begins anew or Biden wins and every brain fart he has in public as president sparks a round of “Is it time?”

I’m curious to know what Gregg’s motive was in writing this piece, as it’s obviously not a serious argument on the merits. There are two relevant sections of the 25th Amendment and neither one works for what he’s imagining. Section three:

If that’s the mechanism for the “coup” Gregg has in mind, it would involve a hostage crisis. Biden would have to be coerced somehow into declaring himself incompetent and then prevented from revoking that declaration. That is … a dark scenario. And it’s surely not the one Gregg is thinking of. He’s thinking of section four:

That’s the “coup” scenario, the one that Trump critics always cite when they start daydreaming about the 25th Amendment. The vice president and a certain number of willing accomplices in the cabinet can strip the president of power on grounds of incapacitation if — if, if, if, if — they can get supermajorities in both houses of Congress to agree. That’s a heavier lift procedurally than impeachment is, since impeachment requires a mere simple majority in the House. What it amounts to in practice is that both House Republicans and Senate Republicans would have veto power over any Democratic attempt to replace Biden with his own vice president. And it’s not a close call: The GOP would need to lose more than 50 seats in the House this fall and 20 in the Senate in order for Dems to have the numbers they need to pull off this “coup.” No matter how bad things look for Republicans in November, they won’t look remotely bad enough for those sorts of losses to be possible.

So a lefty coup would be dead on arrival unless it got a Republican buy-in, and the GOP would have no incentive to provide that buy-in. Yes, true, there’s a Machiavellian argument that Republicans would be better off in the 2022 midterms if they had a left-wing ideologue as their chief foil instead of smilin’ Grandpa Joe, but they’d still need to explain to their base why they chose to hand presidential power to someone more progressive than Biden when they had it in their power to block that. That explanation would be particularly difficult if Democrats control the House and Senate since the new lefty POTUS might have the numbers to enact a radical agenda once the Senate filibuster was nuked. You really want to give President Warren a crack at seeing what she can get passed in the span of 18 months or whatever, in the hope/expectation that America’s voters will surely punish her and her party in the midterms?

There’s another problem for Republicans. Whatever the midterm benefits might be, elevating the VP to the presidency prior to 2024 will give him or her the advantage of incumbency in that election. If anything, Republicans should want Sleepy Joe to serve out his full term in the belief that he’ll be too old and tired to run for a second one, leaving the next Democratic nominee without that incumbency advantage. Running against Harris or Warren with two years as president under her belt would make the odds of winning steeper for GOPers. Better to force Biden to stay on the job and hope that he really does slow down visibly in office so that voters might look to a younger Republican like Tom Cotton or Josh Hawley as an alternative in the next election.

Exit question: What was Gregg’s thinking in writing this? Is he hoping to land a cabinet position in Trump’s administration just in case POTUS wins reelection?