Electoral model: Trump has a 91% chance of winning 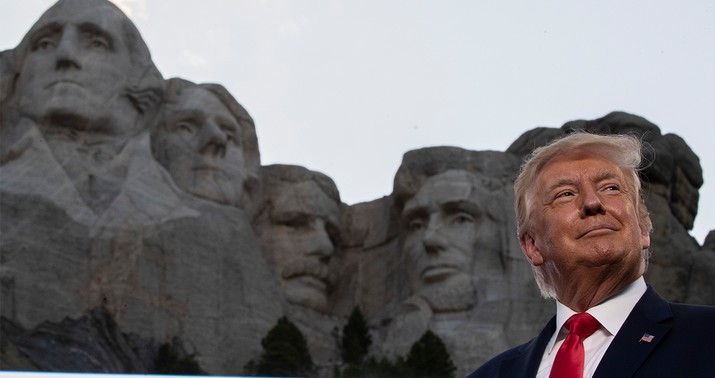 Not sure I’ve seen a bolder political prediction this year.

I’m going to disagree with the idea that the president is a 91 percent favorite to win right now, and disagree more forcefully that he’s going to lock down 362 electoral votes en route to victory. I think there’s still a vaguely plausible scenario in which he wins in November, especially if the solid jobs reports keep piling up, but he’ll certainly have fewer EVs this time than he had against Hillary.

Established in 1996 by Stony Brook University political science professor Helmut Norpoth, the Primary Model correctly picked the victors in multiple presidential elections — including the last one…

“The Primary Model gives Trump a 91% chance of winning in November. This model has picked the winner in all but two elections since 1912, when primaries were introduced, including, of course, Trump’s victory in 2016,” Mr. Norpoth tells Inside the Beltway in a statement.

“As for polls showing Trump trailing Joe Biden right now, remember 2016. Polls and poll-based forecasts all handed Clinton a certain victory. But this is not the only failure,” he continues.

“As a rule, the candidate with the stronger primary performance wins against the candidate with the weaker primary performance,” Norpoth writes in explaining his model’s success. On the other hand, that same webpage begins with the words, “Caution: The massive disruptions caused by the Coronavirus outbreak may prompt me to revise the forecast, especially if there is a crack in Trump support.” He said the same thing in a Fox appearance on May 29 but noted at the time that Trump’s job approval hadn’t yet been dented by COVID-19. “In fact, in the early goings [of the pandemic] he got a little uptick,” Norpoth noted of the president’s approval rating. “And, unless his approval rating collapses, I don’t think that this would have much bearing on my forecast.”

Would this count as a collapse? New this morning from Gallup:

No president who’s polling at 38 percent approval is getting reelected. That doesn’t mean Norpoth’s wrong — there are still four months for POTUS to rebound — but it means he’d be badly wrong if the election were held today. Nor is there as much consolation as there may seem in the idea that there are still four months until America votes. Polling on July 4 is actually a reasonably solid predictor of electoral outcomes historically, writes Harry Enten:

[S]ince 1940, the final result differs from the polls at this point by an average of just 7 points. The median difference is only about 4.5 points.

These should be quite worrisome for Trump given he’s already down double-digits, and there’s no guarantee any polling miss would benefit him.

Indeed, we can translate past polling to give us odds about the current election. At least 8-in-10 to 9-in-10 times based solely on the horserace polling, Biden would be expected to take more votes in the fall.

More troublesome for Trump: no one in an incumbent presidential election has been polling above 50% at this point like Biden and gone on to lose.

History’s either going to end up misleading Enten or it’s going to end up misleading Norpoth. As for Norpoth’s claim that the candidate who runs stronger in the primary almost always wins the general election, you can understand why that might generally hold true. It’s a measure of partisan enthusiasm and we’d expect a candidate whose fans are more enthusiastic to turn out in greater numbers in the general election and defeat a candidate whose supporters are less so. The wrinkle this year is that Democrats despise the president so thoroughly that he may be generating more “enthusiasm” in the other party than he is in his own. Multiple polls that have had Biden leading him big nationally have found heavy majorities of Dems saying that they’re motivated more by their desire to defeat Trump than by their desire to see Biden win. In fact, today’s Gallup poll finds an 89-point gap between Republican approval of Trump (91 percent) and Democratic approval (two percent), the highest the firm has ever measured. I don’t know that conventional metrics for enthusiasm work in a situation where one party basically unanimously wants the current guy out.

As for 362 electoral votes, Trump’s own campaign staff seems to have written off the possibility of him building on his total of 306 from 2016. “States that top campaign officials had said they had the luxury of pursuing are no longer considered add-ons to the president’s electoral vote tally but backstops to keep him afloat,” Politico reported today, citing people close to or involved with his reelection operation. The campaign is spending big on ads in states Trump already won four years ago, like Georgia and Florida, in hopes of keeping them red instead of in blue states in hopes of expanding the map, and donors are allegedly increasingly resigned to losing Michigan and Wisconsin. “We don’t need 306. We just need 270. We can lose Michigan and lose Pennsylvania and still win,” said one Trump advisor. That’s light-years more realistic than 362.

In lieu of an exit question, here’s a new poll that’s encouraging for Trump, relatively speaking. Trafalgar, the pollster that predicted his Rust Belt wins in 2016, has him tied with Biden in Florida at a moment when other pollsters tend to show Sleepy Joe up by five points or better. Fox News recently had Biden by nine(!) there.