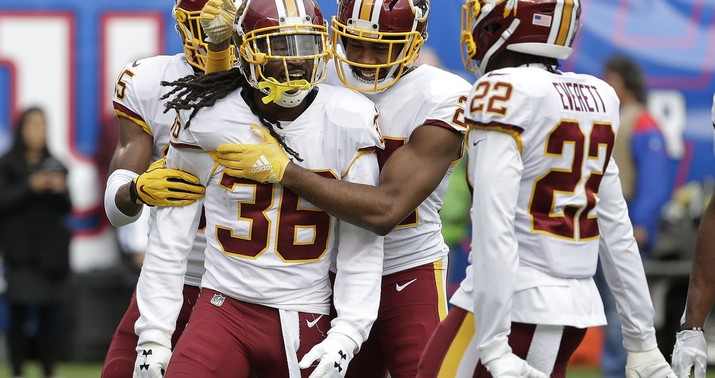 Nothing would be funnier than if he came back a week from now and said, “We reviewed it and we’re still cool with it.”

He might even gain a few new fans for a masterful troll like that for his woeful team, the second most embarrassing franchise in the NFL after my Jets.

An even better troll would be, “We’ve decided to change our name — to the San Antonio Redskins. We’re moving the team next week.”

Anyway, Adam Schefter’s obviously right. You don’t undertake a “review” like this unless you already know the outcome.

“The letter in which they explain why the name change was rational and normal and a logical evolution, as opposed to buckling to a pressure campaign, is going to be one for the history books,” sniffs Charles Fain Lehman. How representative is that pressure campaign, you ask? Well, when the Washington Post asked Native Americans in 2016 about whether the team’s nickname offended them, they got this result:

Lefties have complained ever since about the methodology of that poll since its results were so unhelpful to The Cause.

Anyway, the polling notwithstanding, Snyder had tremendous pressure on him right now to finally take the plunge on a name change. There was corporate pressure: FedEx, which sponsors the Redskins’ home stadium, requested yesterday that they change the name and Nike suddenly disappeared Redskins merchandise from its online store yesterday. There was general culture pressure too, as the recent spate of “problematic” mascot cancellations gave Snyder less of a crowd to hide in.

But there was also league pressure. The NFL is going to be very, very woke this year and having the Redskins stubbornly cling to their name would have distracted from that. It’s not just that the league is now encouraging pre-game protests. It’s not just that they’re greenlighting the signing of Colin Kaepernick to try to make amends for his being blackballed for kneeling during the national anthem. They’re actually going to play the “black national anthem” before all Week One games this fall to show how progressive they’ve become amid the George Floyd protests:

Starting with the nationally televised regular-season opener between the Houston Texans and Kansas City Chiefs on Sept. 10, “Lift Every Voice and Sing,” also known as the Black national anthem, will be performed before every Week 1 kickoff, before “The Star-Spangled Banner,” according to a person familiar with ongoing discussions. The person spoke to USA TODAY Sports on condition of anonymity because plans have not yet been finalized and announced by NFL officials…

The person said after brainstorming with numerous players and the NFL Players Association, NFL officials also plan to honor victims of police brutality through elements such as helmet decals or jerseys. It’s also expected that the Week 1 broadcasts will feature a number of educational PSAs about victims and their families.

Mainstreaming racial “national anthems” strikes me as an exceedingly terrible idea in America 2020, but I think the NFL’s calculating that the more official gestures it makes to show that it believes black lives matter, the fewer gestures the players themselves will be inclined to freelance. There might be less activism on balance in and around games (at least after the first few weeks of the season) if the energy for it is being channeled through the league itself.

Anyway, all of that made things awkward for Snyder. The league’s about to conduct its own version of a mass protest in support of greater racial sensitivity — while trotting the “Redskins” out there to play? Unlikely.

And so on we go to the next controversy: What will the team’s new nickname be? There aren’t many options left on the table that reflect their hometown’s political culture. “Nationals” is taken, as is “Capitals.” They could revive the old baseball nickname “Senators,” although I’d prefer something slyer, like “Bureaucrats.” (The Dallas/Washington rivalry won’t be the same once it’s “Cowboys vs. Bureaucrats.”) Or, of course, they could go the route of D.C.’s basketball team and choose a more generic nickname unconnected to the city itself. Weird but true fact: There’s no team nicknamed the “Tigers” in pro football despite the popularity of that name among college football and basketball teams. We have the Lions of Detroit and the Jaguars of Jacksonville, but no Tigers. Maybe soon?

“Eagles” would have been a perfect nickname for a team from America’s capital city, but, uh, taken. Oh well.

I’ll leave you with this viral clip of Marcellus Wiley of Fox Sports commenting unfavorably on the trend towards maximum wokery in another sport this fall. Exit quotation from Dan Snyder, speaking to the press in 2013: “We’ll never change the name. It’s that simple. NEVER — you can use caps.”

.@MarcellusWiley breaks down why the NBA’s plan to paint ‘Black Lives Matter’ on courts is a bad idea. pic.twitter.com/EoCJNf7ho1