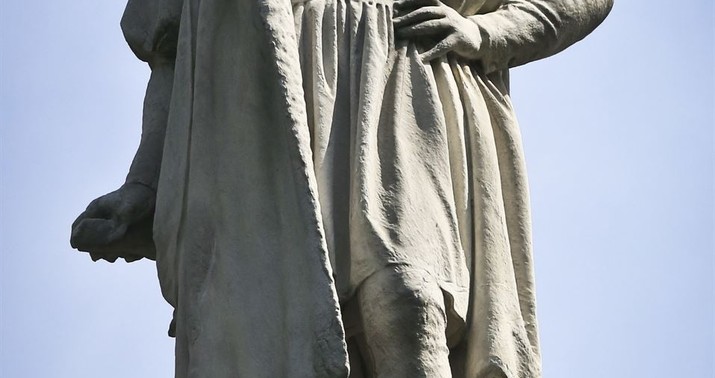 Oh man. This has the makings of one of the sweetest culture-war freakouts of the year, which is saying something given the year we’ve had.

I expect nothing less than a 47-minute Tucker Carlson monologue about it on tonight’s show.

The debate about this inside the Senate didn’t begin as a debate. It began as a straightforward question last month in the wake of the George Floyd protests: Should America make Juneteenth a federal holiday? Answer: Yes, certainly. It’s a slight to black Americans that we have no formal state observance commemorating the end of slavery when they’ve been celebrating it informally since 1865. One way to show that, well, black lives matter is to make their liberation cause for national celebration. June 19, a new holiday for all!

John Cornyn rushed to introduce a bill proposing the idea because Juneteenth specifically recognizes the announcement by the U.S. Army in his home state of Texas that all slaves there were free. Cornyn’s up for reelection in four months in a state that’s trending blue and beginning to look dicey for Republicans as Trump slides in the polls. Spearheading the campaign to make Juneteenth a federal holiday is an easy way for him to try to impress moderates. But he’s run into a problem in the person of Ron Johnson. Johnson’s okay with adding Juneteenth to the federal calendar but he’s not okay with an additional paid holiday for federal workers. He wants a pay-for on this idea — that is, if we’re adding Juneteenth, we should subtract something else.

But what do we subtract?

Johnson and Oklahoma senator James Lankford have a candidate.

“In response to a bipartisan effort to give federal workers another day of paid leave by designating Juneteenth a federal holiday, we have offered a counterproposal that does not put us further in debt,” Johnson said Wednesday. “We support celebrating emancipation with a federal holiday, but believe we should eliminate a current holiday in exchange. We chose Columbus Day as a holiday that is lightly celebrated, and least disruptive to Americans’ schedules.”…

“Juneteenth is a day in our history that redefined the meaning of freedom and equality in America,” Lankford said. “We should celebrate these strides on the federal level while remaining cognizant of the impact the existing 10 federal holidays have on federal services and local businesses.”

“I just don’t think we should be, when we’re already blowing a hole in the budget right now, offering another paid day off for federal employees,” Johnson added. Cornyn isn’t pleased:

Cornyn said swapping in Juneteenth and cutting out Columbus Day “dilutes the message we’re trying to send, which is one of being respectful and honoring and remembering our history.”

“I think that’s problematic,” he said of the Johnson counteroffer. “We’re working through all those things right now we just don’t have an answer right this second.”

It is indeed “problematic.” Johnson’s right that Columbus Day is the most lightly celebrated federal holiday but some Italian-Americans do celebrate it as a day of ethnic pride. If Cornyn embraces a “Juneteenth for Columbus” swap, he’d have to explain himself to them. More importantly, he’d have to explain himself to Trump and Tucker and righties who’ll want to know why he’s giving ground on “heritage” at a moment when mobs are defacing statues of Washington and threatening to tear down statues of Lincoln. The racial politics of the trade make it even zestier, with a “black holiday” on tap to replace a “white” one. And not just any one. Columbus is, of course, a recurring target of wokesters who object to honoring a figure who persecuted Native Americans. Some already refuse to recognize Columbus Day and celebrate Indigenous Peoples’ Day in October instead. Just this morning, a statue of Columbus was removed from its perch in front of City Hall in, uh, Columbus, Ohio.

Which raises the question: Did Johnson offer a “Juneteenth for Columbus” swap as a poison pill? That is, is he secretly looking to kill off the effort to make Juneteenth a holiday altogether by making the price so politically steep for Republicans that they’ll have to abandon the idea?

Maybe not. If you look at the calendar of federal holidays you’ll see that Columbus Day really is the weakest link in the chain, the holiday that could be removed with the least fuss. Christmas, Thanksgiving, and New Year’s are total nonstarters, the ones everyone looks forward to. Memorial Day and Veterans Day are sacrosanct, honoring America’s troops. (They could be combined in theory, but no politician would dare slight veterans by removing a day already designated to honor them.) Independence Day? Don’t make me laugh. Washington’s Birthday/President’s Day is even more closely identified with American heritage than Columbus Day, and thus would be even more “problematic” to jettison. And Martin Luther King Day is untouchable, especially at a moment when the public has never been more sympathetic to black Americans’ struggle against racism. Swapping in Juneteenth for MLK Day would be an insult, tantamount to saying, “You people are only worth one holiday.”

That leaves Labor Day and Columbus Day. I’m all for killing off Labor Day but the left won’t like it for political reasons and the rest of the country won’t like it for basic … party reasons. Labor Day is the unofficial end of summer, the first holiday since July 4 and the last widely celebrated holiday until Halloween. It’s a day for barbecues and nice weather. America would miss it. And so, inevitably, Johnson turned to Columbus Day, the odd man out. His logic for choosing that holiday to sacrifice instead of the others isn’t incomprehensible.

But I’m very much open to the poison-pill theory. Johnson told reporters today that he estimates an extra paid day off for federal workers would cost the feds $600 million. That’s a lot of money, sure, but to put it in perspective relative to the overall federal budget, this site estimates that Uncle Sam now spends $23.7 billion per day overall. Just shy of $1 billion per hour. After watching his party run trillion-dollar deficits for the past several years and in the midst of an historic spending spree aimed at limiting the economic damage from the coronavirus lockdowns, Johnson’s willing to roadblock Cornyn’s bill over what amounts to … about 40 minutes’ worth of federal spending.

Seems a little disingenuous in context, doesn’t it? And no doubt pointless from Cornyn’s perspective. Democrats will absolutely add Juneteenth to the calendar if they take back Congress this fall. The choice before Republicans is simply whether they want to share some of the credit by doing it now or leave it to Dems to reap the benefits. Presumably Johnson’s bill will get voted down with Republican help and then Cornyn’s bill will pass. And then Trump will sign it into the law — I think. But you never know how he might surprise you with a needless, politically damaging fight:

.@LindseyGrahamSC says Trump should *not* veto the NDAA.

“The issue of Army bases being named after Confederate generals is a legitimate concern in the times in which we live. I'm okay with a process that the Senate came up with. And there's a lot of good things in this bill.”