No more Trump rallies (for now)? 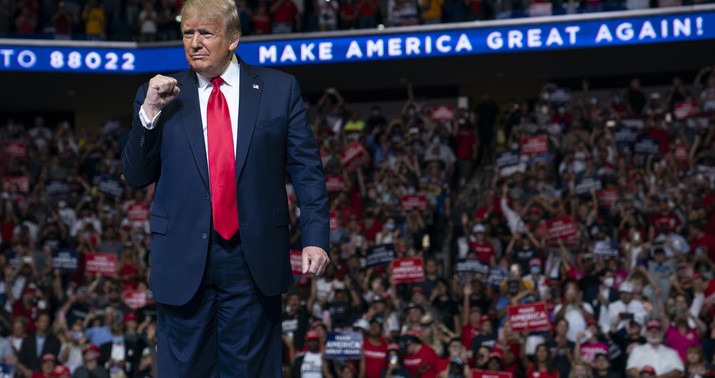 He was supposed to hold a rally in Alabama next weekend for Jeff Sessions’s Senate primary opponent, Tommy Tuberville. Today the White House announced that that’s been scrapped, no doubt to Sessions’s relief. As you’ll see at the end of this post, White House spokesman Mercedes Schlapp was asked today on Fox News when we’re apt to see the president back in an arena before a crowd and she dodged the question, talking up the campaign’s online video platform instead.

In fact, go to the “Events” page on the Trump campaign website and you’ll find a notice above listings for various meet-ups, etc, that “These events are in the process of being turned into virtual seminars and a Trump Victory Organizer will contact attendees with more details.”

Sure sounds like rallies are done for now. CNN reported last Monday that prior to Trump’s event in Tulsa “there had been tentative plans to announce another rally for the near future, perhaps as early as the next two weeks.” The lackluster attendance seems to have cashiered those plans; the last thing Trump needs now is another round of hooting at him for not being able to fill an arena at a moment when his base is understandably scared to participate in a mass gathering. Worse, the past week has been submerged in news about outbreaks across the south, including the state Trump was scheduled to visit next week. Alabama’s positivity rate has nearly doubled over the past nine days. If he had insisted upon going ahead with the rally, he might have been faced with another half-empty building and more bad press for prioritizing his need for adulation above good social-distancing practices.

So no rallies. For the time being.

Trump was slated to travel to [Alabama] ahead of the Senate race between his former attorney general Jeff Sessions and the former Auburn University football coach Tommy Tuberville, but plans were called off as state officials voiced concerns about a mass gathering and campaign officials ultimately decided against it. A person close to the campaign said there are currently no rallies on the horizon, but aides are scoping out possible venues for when they decide to host them again…

There had once been plans to announce new rallies shortly after Tulsa, with some of Trump’s aides believing the event would validate their claims of pent-up demand. But instead the opposite occurred and the campaign began to rethink how Trump’s rallies would look going forward, including weighing smaller events or outdoor venues…

Trump had been itching to return to the campaign trail and was personally enthusiastic about the idea of traveling to Alabama days ahead of the Senate race where he’s endorsed his former attorney general’s opponent. He views the rallies as an outlet where he can connect with his supporters in a way that he can’t inside when he’s in Washington and has blamed bad poll numbers on his absence from the campaign trail.

He’ll get to scratch his itch to speak live to a crowd twice in the next week, first with his remarks at Mt. Rushmore on Friday and then the following day at the Salute to America event in D.C. Those audiences will be gathered outdoors, I take it, since they’re there to watch fireworks. Even so, local public health officials in South Dakota are worried about a coronavirus spike stemming from the event. Which reminds me — how are things going in Tulsa now that we’re 10 days on from Trump’s rally? If an outbreak was seeded there, one would think we might be starting to see it in the daily case counts by now. We aren’t really seeing it:

There was a big surge on June 23 but that was too soon after the rally to have originated there. Right now Tulsa’s seeing cases at around the same levels as two weeks ago. A good sign so far! On the other hand, I haven’t seen any data about where the rallygoers inside the building reside. One would expect that Tulsa County might be overrepresented among them, but diehard Trumpers come from all around to see him in person. It’s worth noting that Oklahoma experienced a record number of daily confirmed infections today. Maybe that’s nothing more than the state experiencing the same uptick from early reopening that its neighbor to the south is coping with, or maybe it’s a rally thing. We’ll keep an eye on it.

Another reason for Trump to avoid rallies for now is that they poll terribly with the public and are destined to poll even worse as anxiety about the new COVID outbreak climbs. Suffolk asked people in its new national poll what they thought about the GOP’s plans for its convention, a live event with cheering crowds to drum up enthusiasm, and the Democrats’ plans, a virtual event with sparse live attendance. It was no contest:

Asked about the national political conventions next month, most Americans oppose the decision by Republicans to stage a traditional rally in Jacksonville, Florida, for Trump to accept the GOP nomination, despite the pandemic. That is called “reckless and dangerous” by 54% of those surveyed, including more than one in three Republicans.

Half that number, 27%, say Democrats made a mistake in moving largely toward a “virtual” convention anchored in Milwaukee, saying it will “cost them an opportunity to generate enthusiasm and organize supporters.” One in four Democrats call that decision a mistake.

People want to know that the candidates are taking the outbreak seriously. Trump canceling rallies is a gesture towards that.

Here’s Schlapp talking up virtual events as a terrific alternative to live rallies, which tells you where things stand right now. Speaking of the GOP convention, Ron DeSantis said today that he won’t issue another lockdown for Florida. That should protect Trump’s plans for a live convention in Jacksonville but it also amounts to DeSantis gambling his national future, not to mention the welfare of many millions of Floridians. If Florida’s outbreak turns bad — like, Cuomo bad — and he declines to do everything in his power to limit transmission, his enemies will punish him for it forever. I think he’s basically right on the merits that it’s not businesses being open that’s the problem, it’s young adults not following social distancing rules that is (“I think when you see the younger folks, I think a lot of it is more just social interactions, so that’s natural”). But businesses attract crowds, especially crowds of young adults that are bored with isolating and convinced that they’re bulletproof. There’s a reason he shut down in-house service at bars again, after all.

Fox anchor Bill Hemmer: Will there be a rally soon on the president’s schedule?

Trump campaign adviser Mercedes Schlapp: We don’t have an announcement in terms of the future events.

Hemmer: Does this mean rallies will be virtual?

Schlapp: We don’t have an announcement to make. pic.twitter.com/vLhwbcwJtV