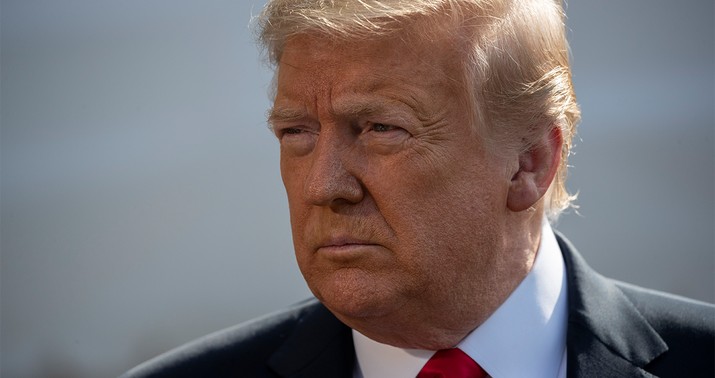 Fox News polls have become an “event” on social media because everyone understands that the president expects his favorite network to propagandize for him, and yet … Fox’s polling is routinely terrible for him and discouraging.

A collective thrill runs through the media each time they release one: Wait until he sees this.

I’m half-convinced that FNC’s polling bureau dropped this latest round on him purely as payback for him complaining about them all the time. “Remember how he whined about the last national poll? Let’s poll the reddish swing states he thinks are in the bag for him this fall. See how he likes those apples.”

New @foxnewspoll out this evening ahead of the November election— @JoeBiden ahead kf @realDonaldTrump in Florida, Georgia, North Carolina and by a small percentage in Texas. #foxnews #politics pic.twitter.com/wV3bedmiVC

Note that Biden doesn’t need to win a single one of those states to win the presidency. Holding Hillary’s states and winning the Rust Belt would do it, or winning two of three there plus Arizona would do it. Everything on this list is must-win for POTUS and gravy for Biden. If Florida alone turned blue, basically any other single swing state would be enough to hand him the White House.

North Carolina is a slight exception to that rule, as Trump won there by a shade less than four points whereas Biden leads by only two now. But again, all of these states are gravy for him. And it’s important to note: Except for Georgia, these results are *not* outliers. Other recent polls have Biden leading in Florida by six to 11 points, trailing in Texas by just one point, and ahead in North Carolina from anywhere between two and nine(!). Even Georgia may not be an outlier. Trump leads by four there in the RCP average, but the last time the state was polled before today was early March, before America went through four months of relentless upheaval. Fox’s data there may also reflect the true state of the race.

The most noteworthy thing about their Texas results is how Trump underperforms other Texas Republicans. John Cornyn is leading both of his potential Democratic Senate opponents by double digits and Gov. Greg Abbott is polling above 60 percent in job approval. They didn’t get a “Democratic sample” or whatever. It’s a battle of the bases between Trump, who wins men, whites, and senior citizens (a good sign for him there), and Biden, who wins women, nonwhites, and millennials. The difference for Biden is independents, who break 40/22 for him, as well as a small but significant number of voters who approve of Trump’s job performance but prefer Biden. We’ve seen that phenomenon in multiple polls lately and it’s true here too: Eight percent of people who approve of Trump’s performance are backing Biden. The president actually reaches a respectable 50 percent job approval overall in the state, which should be enough for him to win. The reason he’s trailing is because he’s losing that eight percent that rates him well enough but are backing the Democrat anyway.

Interestingly, nearly a quarter of self-identified conservatives in Texas (23 percent) also prefer Biden to Trump. By comparison, just 12 percent of liberals there prefer Trump to Biden.

What about Florida? The same base groups show up strong for Biden there but Trump’s winning men by just two points and senior citizens by just one. If he can’t claw those demographics back, he’s sunk. Independents again favor Biden by 20 points or so (40/18), and again eight percent of those who approve of Trump’s job performance prefer Biden anyway. And yes, there’s a sizable share of self-identified conservatives crossing the aisle in Florida as well. Here’s it’s 22 percent who support the Democrat versus 11 percent of liberals who support Trump. There may be a Never Trump vote — or a “Yes Trump Against Hillary But Not Against Biden” vote — that’s meaningfully affecting these races.

This is noteworthy too:

For Trump fans, this is a race about Trump. A heavy majority of his supporters are voting for him because they’re enthusiastic about him. For Biden fans, this is … also a race about Trump. A majority of his voters are voting for him because they fear another term for the president. That is, the election for the moment is a pure presidential referendum, which is a bad thing to have when your party’s presiding over a pandemic, economic collapse, and civil unrest — and a truly terrible thing to have when your candidate couldn’t consistently score above 44-45 percent job approval even before COVID. This is why Biden hides in his basement and would go on hiding there until Election Day if he could. Trump needs a “lesser of two evils” strategy to win. If Biden’s AWOL, there’s no other “evil” for voters to consider. It’s all about Trump.