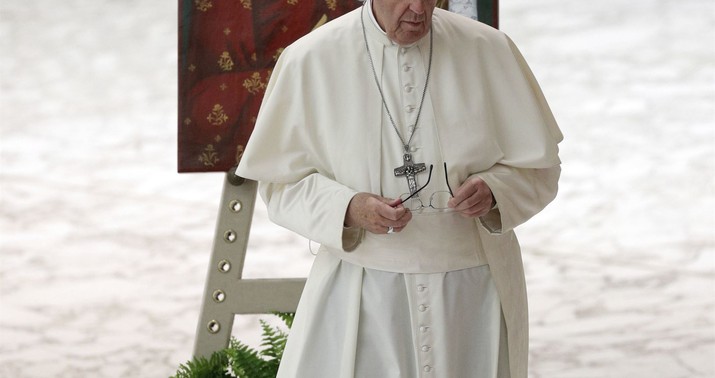 It’s extremely on-brand for America 2020 that wokesters would get bored with “Black Lives Matter” just as the idea’s gaining acceptance and proceed immediately to “Crucify White Jesus.”

Or, as I assume King would prefer to phrase it, “Make Jesus Semitic Again.”

Either way, if you’re out to smash idols, there’s no sense messing around with small potatoes like George Washington. Go for the gold.

Stephen “redsteeze” Miller reminds me that King was a featured speaker at Bernie Sanders’s campaign launch in 2019. Not all Bernie admirers were thrilled by his affiliation with the candidate, though: “I woke up this morning to once again see Shaun King trending, and my immediate reaction was, ‘What the hell did he do this time?'” To think, in an alternate universe where Sanders went on to win the Democratic nomination, the status of “white Jesus” is suddenly a major issue in the upcoming presidential election.

I regret that it isn’t. Out of sheer morbid curiosity, I’d like to see what Trump would do with that one.

Given a choice between enforcing prohibitions on modern blasphemy, i.e. sins against wokeness, and enforcing the old-fashioned kind, it’s no contest for King. By “they should all come down,” though, does he mean … mobs raiding churches? Or something superficially more civilized, like pressuring the local city council into banning images of Jesus that look “too Caucasian” and then watching the ban get laughed out of court?

A good look for the American left, either way. I encourage them to take King’s advice and to upload photos and videos of the deed to commemorate it when it’s done. The Senate picture isn’t looking great right now for the GOP. A Year-Zero PC purge of images of Christ might be just what the doctor ordered.

Eventually some mischief-maker will push back by creating an image of Mohammed as some ultra-Aryan blonde Nordic god and the country’s circuits will fry as it tries to navigate the politics of that. It’s an insult to Islam to depict Mohammed, but it’d be a bigger insult to destroy the image, except that the white supremacy inherent in depicting Mohammed as white requires us to destroy it, although maybe the image is aimed at encouraging white people not to view Mohammed as “the other,” in which case we should promote it. I can picture King tearing up the image, then reconsidering and taping it back together, then tearing it up again, then taping it back up…

Exit question: Which features in an image of Jesus, specifically, would require us to deem it too white for comfort? Blue eyes are a given but what about lightish brown hair? On skin tone, would there be like a reverse “brown paper bag test,” or some sort of quadroon/octoroon system for rating how Semitic he looks in a given image? (“He’s no more than an eighth Jewish in this painting. Burn it.”) The idea of Shaun King treating physical appearance as a yardstick for racial authenticity is phenomenal.