New York Museum of Natural History: Teddy Roosevelt isn’t canceled but the equestrian statue of him is 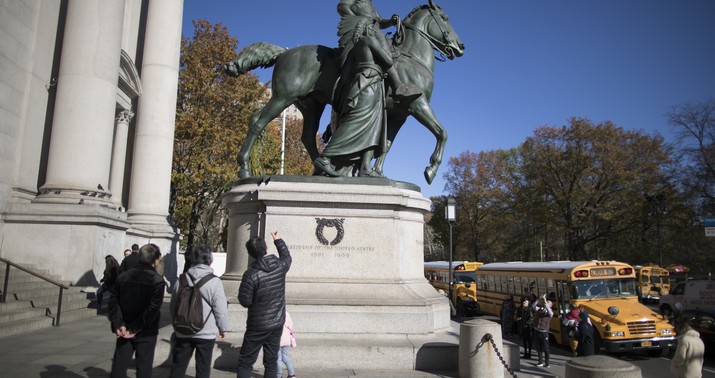 This is an interesting case inasmuch as the museum *isn’t* rejecting Roosevelt altogether. On the contrary. According to the Times, not only are three spaces inside the building already named for TR, a fourth will now be added to “compensate” for the removal of the statue: The Hall of Biodiversity will become the Roosevelt Hall of Biodiversity “in recognition of his conservation legacy.”

Their problem with the statue is specific to the statue. It features a majestic TR astride a horse with a Native American walking beside him on his right and an African man walking on his left, “clearly a narrative of white racial superiority and domination,” as one Columbia professor put it. What’s an institution to do with a monument whose central figure warrants celebration but which celebrates him in a “problematic” way? My framework for analyzing whether a monument is appropriate is to look not just at the person being celebrated but at the cause that the monument is designed to extol. In the case of George Washington and Thomas Jefferson, the cause is American liberty and independence. That’s worth celebrating, their racial sins notwithstanding. In the case of Confederate officers, the cause is secession and war on the United States in defense of slavery. That’s not worth celebrating, their valor notwithstanding. I can imagine absurd hypotheticals in which a deeply malevolent figure is honored with a monument for a benevolent act — e.g., a statue of Hitler to celebrate the Autobahn — but “focus on the cause, not the man” is a rule that usually works.

What do you do, though, if you have a monument of a worthy figure that’s presented in an unworthy way? Imagine a statue of Washington, whip in hand, with a group of slaves at Mount Vernon. In that case it’d be far less clear which cause based on Washington’s life work, specifically, was actually being honored. Is it a monument to American independence or to African-American bondage? The museum’s problem with the Roosevelt equestrian state is even trickier. The cause it honors, conservation and Roosevelt’s role in championing it, is noble. But the imagery of the white hero accompanied by the seemingly inferior native peoples of Africa and North America in serving that cause is cringy. For years the museum has acknowledged that cringiness while leaving the statue be, despite occasional acts of vandalism against it. Now it’s decided that it’s no longer worth the trouble.

“Over the last few weeks, our museum community has been profoundly moved by the ever-widening movement for racial justice that has emerged after the killing of George Floyd,” the museum’s president, Ellen V. Futter, said in an interview. “We have watched as the attention of the world and the country has increasingly turned to statues as powerful and hurtful symbols of systemic racism.”

Ms. Futter made clear that the museum’s decision was based on the statue itself — namely its “hierarchical composition”—- and not on Roosevelt, whom the museum continues to honor as “a pioneering conservationist.”

“The American Museum of Natural History has asked to remove the Theodore Roosevelt statue because it explicitly depicts Black and Indigenous people as subjugated and racially inferior,” Mayor Bill de Blasio said in a statement. “The City supports the Museum’s request. It is the right decision and the right time to remove this problematic statue.”…

“The world does not need statues, relics of another age, that reflect neither the values of the person they intend to honor nor the values of equality and justice,” said Theodore Roosevelt IV, age 77, a great-grandson of the 26th president and a museum trustee. “The composition of the Equestrian Statue does not reflect Theodore Roosevelt’s legacy. It is time to move the statue and move forward.”

Just to make this more complicated, it’s not undisputed that the statue is intended to show Africans and Native Americans as inferior to Roosevelt. It clearly looks that way to the modern eye, and no doubt plenty of Americans would have affirmed their belief in that inferiority when the statue went up. But:

“[Architect John Russell] Pope refers to the figures as a ‘heroic group.’ That’s important. In some criticisms, the standing figures were taken to be lesser than Roosevelt. That was never the intention. They are allegorical figures representing Africa and America, emphasized by the animals on the parapet reliefs.”—Harriet F. Senie, Director, M.A. Art History, Art Museum Studies, The City College of New York

Pope did refer to the three as a “heroic group” but the MONH website also notes that he described the African member of the group as “primitive.” Would leaving the statue in place with a plaque offering Senie’s take on the symbolism suffice? What about two plaques, one offering a more innocuous allegorical interpretation of the statue and the other a more critical read on the white hero’s exalted status in the image? What about a new statue in which TR is simply walking with the Native American and African figures? Or would their stereotypical presentation make that problematic too?

The museum could eliminate the “white superiority” message by having the Native American and African figures removed, but, er, I’m thinking that would make things worse, not better.

We all know what Trump thinks, but just in case you’re stumped:

Ridiculous, don’t do it! https://t.co/VYez8p9AJh

This is fundamentally different from the other statue debates in that it’s a debate over meaning more so than “tradition.” The statues of Confederates are clear enough in their symbolism; the arguments for keeping them are that they’re part of the country’s heritage, for better or worse, and that leftist droogs will start smashing statues of Washington if we let them smash statues of Robert E. Lee. (A perfectly plausible argument, by the way.) Those arguments apply to the TR statue too but underlying them is an argument about meaning. Did the sculptor and the museum’s leadership intend to send the message that Native Americans and Africans? Even if they didn’t, if that’s the message that many passersby are taking from the image, is it worth leaving it in place instead of honoring TR in some less ambiguous way?

Here’s Democrat Jason Crow, who doesn’t seem to care about any of these nuances.