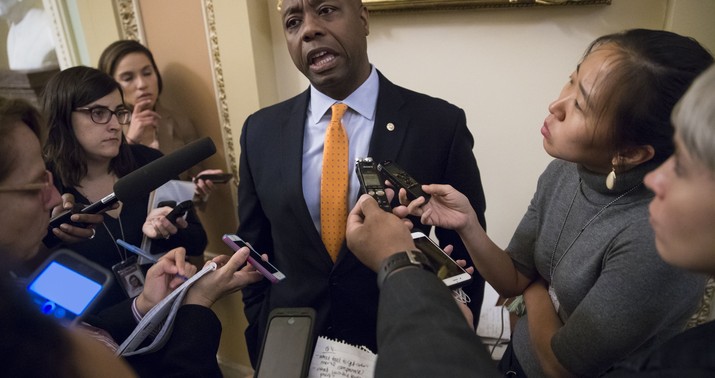 Police reform is the topic of the hour on the Sunday shows as nationwide protests over the killing of George Floyd stretch towards the start of their fourth week. The star guest is Sen. Tim Scott, lead author of the Republican bill that stands the best chance of passing the Senate. He wants to incentivize local PDs to be more transparent about bad behavior by officers in the expectation that that’ll produce less of that behavior in the long run. That’s a more conservative approach to reform than the sort of mandates and regulations Democrats are eyeing. Scott himself explained the gap between the two parties on the subject this way:

He later added, “I think we both have the desire to see the chokehold used infinitely less. We take two different paths to get there, but that’s one area. I think the duty to intervene is something that we have in our legislation. Watching the three officers stand there while the other one was on Mr. Floyd’s neck, that’s something that we should work on. There’s another part of it that deals with data and training, both really important parts. When I look at the House bill, there’s a lot around de-escalation training. It’s in our legislation as well. Use of force boards, that’s a part of our bill. We do it differently. We want to study it before we move into it. They want to move it — quickly into it. I think it’s important for us to have that conversation. But when you’re that close from a beginning point in legislation, that means there’s a really good chance that something good will come out of it.”

Scott continued, “We’re distances away on the qualified immunity. That is something that there are members of my conference that want to have that conversation. That’s the minority of my conference. I would say that the majority of their conference wants to have a conversation around qualified immunity. How we deal with the no-knocks is a place where we both want to deal with it. We have two different ways — two different approaches to dealing with it.” Scott further stated that there needs to be more information on how no-knock warrants are used.

It’s hard to believe that ending qualified immunity for cops will end up in the final legislation when Trump has already ruled it out. Republicans won’t want to have an intraparty spat over that if there aren’t 67 votes in the Senate to override a presidential veto, and there probably aren’t. (The Supreme Court might end up tackling qualified immunity on its own but the time horizon on that is longer.) Scott will be on “Meet the Press” and “Face the Nation” to discuss areas of possible compromise with Democrats and to recall his own experiences of being viewed suspiciously by police because he’s black. He may also have a word or two for some of his critics on the left, black and white alike, who have treated him as a Republican “token” this week: “If you want us to root out racism on the other side, be careful on what you have in your own heart,” he said of those detractors on Wednesday. Oh, and he’ll certainly be asked about Trump’s resistance to renaming military bases that are currently named after Confederates. As of two days ago Scott was neutral on that. Has he shifted?

Another guest of note this morning is Seattle police chief Carmen Best, who’s unhappy with the atrocious leadership in her city that allowed a group of hippies to declare their own mini-state in the heart of the capitol hill district. She’ll follow Scott on “Face the Nation” to discuss whether it’s time to liberate the CHAZ or to let the “summer of love” play out unimpeded as innocent people are menaced and extorted inside. Elsewhere, Oklahoma Sen. James Lankford will be on “This Week” and “State of the Union” to share his own thoughts on police reform as well as the prospect of the president holding a massive rally indoors in Tulsa next week. The good news is that the city hasn’t been hit hard by COVID-19 yet. The bad news is that the trend lately … isn’t great:

Finally, Stacey Abrams will be on “This Week” to make one last desperate attempt to convince Biden to nominate her for vice president even though reportedly she hasn’t been contacted by his vetting team. The full line-up is at the AP.