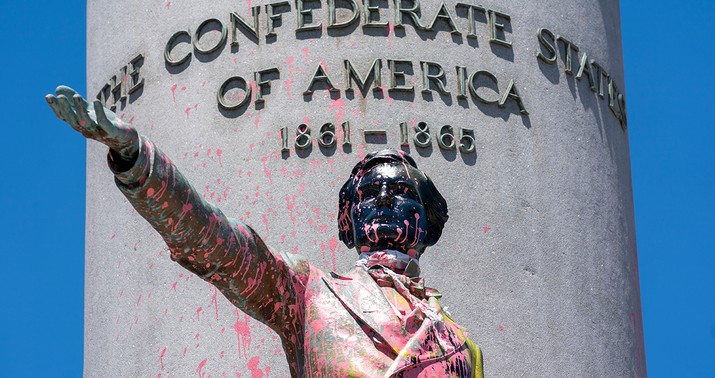 I can’t believe how blatantly Democrats are baiting Trump to go all-in on this issue and how he’s actually taking the bait.

Yesterday Pelosi sent around a letter calling for statutes of Confederate figures in the Capitol to be removed. The day before that, Elizabeth Warren announced that she’d use her position on the Senate Armed Services Committee to purge the military of Confederate tributes — not just by renaming bases but by renaming all assets, like ships, whose names celebrate the CSA.

As a member of the Senate Armed Services Committee, I filed an amendment to the annual defense bill last week to rename all bases named for Confederate generals. It's long past time to end the tribute to white supremacy on our military installations. https://t.co/eP6ktRWK8C

What’s clever about that bill is how it potentially drives a wedge between Trump and Republicans in Congress. There’s a spectrum of GOP opinion on this issue in the House and Senate, I’d guess: Some are happy to see Confederate names stripped, some are indifferent but willing to do it to ingratiate themselves to swing voters, and some are either worried about the politics in red states or flatly unwilling. Democrats want to get Republicans fighting over Confederate iconography in a bright media spotlight at a moment when the country is momentarily trending more liberal on issues related to race. And if they can get Trump involved in that fight, so much the better. That’s the point of Pelosi’s letter, I think: The more they can goad Trump into defending Confederate symbols, the more they can use it against him and ultimately against downballot Republicans. Every Republican in the House and Senate will potentially be forced to say whether they side with (gasp) the Confederacy or with (gasp) the Democrats against Trump.

If you’re a Republican in a non-southern state, do you embrace this image or run from it?

Warren’s proposal was an amendment to the defense bill that Congress is currently working on, which makes it even more potent. That bill, which funds the Pentagon, has passed every year for 59 straight years. If Republicans were to try to block it this year because of Warren’s amendment, they’ll be shredded by Dems and the press for treating Confederate nomenclature for the U.S. military as a more urgent priority than actually funding the U.S. military. Better to kill the amendment quietly in committee than add it to the final bill and force a big showdown over it. Surprisingly, though, the Republican-controlled Senate Armed Services Committee approved Warren’s amendment today via voice vote — despite Trump’s warning yesterday that he’ll never agree to rename American bases.

The committee adopted an amendment to the annual Pentagon policy bill that gives the Defense Department three years to remove the names of Confederate generals from U.S. military assets, according to a source familiar with the closed-door proceedings.

The language, adopted by voice vote as President Donald Trump preemptively threatened to veto any defense bill that did just that, affects massive bases like Fort Bragg in North Carolina and Fort Benning in Georgia. But it also goes further and includes everything from ships to streets on Defense Department property…

[Trump’s] effective veto threat sets up a standoff with Capitol Hill, with House Democrats likely to advance similar provisions in that chamber’s defense authorization, especially after the Senate committee action.

This is exactly the reaction Democrats want from him, forcing Republicans to die foolishly on this hill:

Seriously failed presidential candidate, Senator Elizabeth “Pocahontas” Warren, just introduced an Amendment on the renaming of many of our legendary Military Bases from which we trained to WIN two World Wars. Hopefully our great Republican Senators won’t fall for this!

The least painful option for House and Senate Republicans would be to pass the bill with veto-proof majorities. In a way, that would be a win/win. Trump would get to burnish his “politically incorrect” cred by vetoing the bill and congressional Republicans would get to distance themselves from him on the subject. The Pentagon would be funded. Are there enough GOPers in either chamber willing to join with Democrats and defy Trump, though, even when it’s in their own political interest to do so?

Here’s the biggest “tell” of how awkward this debate is for the party. It takes a lot to get Kevin McCarthy to separate himself from Trump, especially on a culture-war issue in which the president is vocally invested. But even he’s leaving open the possibility of Republicans supporting a bill to de-Confederate military bases.

Asked if he'd vote in favor of removing Confederate leaders names from Army bases, Rep. Kevin McCarthy says he is "not opposed to it" and will look to see what comes out of the the National Defense Authorization Act to make his decision. https://t.co/nemkeZRWY6 pic.twitter.com/p8QmQimjCn

He also said today that he’d support a bill banning chokeholds by police. I don’t think Trump’s commented on that yet; normally it’s unlike McCarthy to get ahead of the president on legislation. Clearly (and correctly) he’s concluded that politics on race relations and police reform favor a little more conciliation than Trump is willing to give. So he’s creating a little space for his caucus to compromise.

Here’s what remains of the statue of Jefferson Davis that was toppled last night in the capitol of the Confederacy. Note that over the weekend the Marine Corps banned all displays of the Confederate flag on Marine installations. The military is somewhat ahead of the Democrats on this.