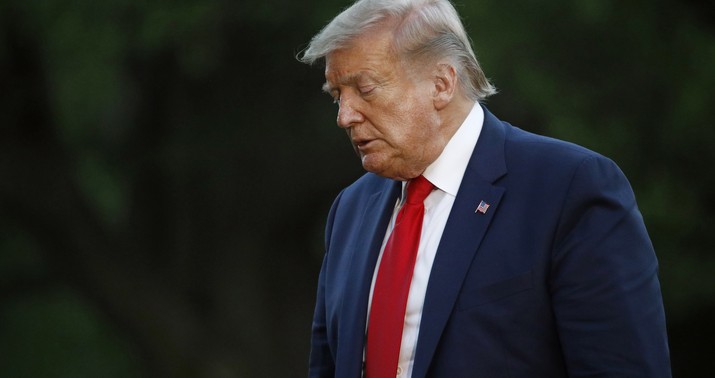 Bloomberg has no specifics about what was said, but given the numbers lately, we can guess.

“One of the people said it was expected to be a tense meeting,” said the outlet, citing a source. I’ll bet.

President Donald Trump summoned top political advisers including his re-election campaign manager, Brad Parscale, for a White House meeting on Thursday as his political standing erodes in key battleground states, according to people familiar with the matter.

Trump’s son-in-law and senior adviser, Jared Kushner, who is the de facto leader of his re-election effort, participated in the meeting, the people said, as did Deputy Campaign Manager Bill Stepien and Trump’s top pollster, Tony Fabrizio…

I wonder what they talked about:

Biden's lead in the RCP National Average has bumped up to 7.8 points. pic.twitter.com/3GrHejdJQf

Biden’s lead ticked down this morning to 7.2 points but the 7.8 percent margin he enjoyed yesterday was his biggest lead this year. And those are just the national polls. The president’s friends at Fox News dropped three state polls on him last night ranging from the bad but expected (Biden leads by four in Arizona) to the bad and unexpected (Biden leads by two in Ohio) to the out-and-out catastrophic (Biden by nine in … Wisconsin). Wisconsin is the reddest of the Rust Belt battlegrounds that went for Trump in 2016, a state where his job approval is normally a bit better than it is nationally. Fox’s result is an outlier — Biden led only narrowly in WI in May — but if they’re a picking up an emerging Democratic trend in cheesehead country, the GOP’s going to get wiped out nationally this fall.

Although really, the Ohio result is just as bad as, if not worse than, the Wisconsin result. Trump is faring about 10 points worse in both states right now than he did in 2016; he won Ohio going away that year, remember. And Fox’s result might not be an outlier in this case. Biden led by four in a different poll of Ohio in March, and Trump led by just three in a third poll in May. It’s reasonable to think that the toxic combination of the pandemic, economic collapse, and unrest over George Floyd’s death has momentarily made the state a toss-up. If it’s still a toss-up in November then Trump is all but done.

The Times reports that his private polling is no better than the public stuff. He didn’t call today’s meeting because he’s worried about what the RealClearPolitics average is. He called it because his own data is telling him that he’s losing.

In private polling conducted by Mr. Trump’s campaign, the president is now well behind Mr. Biden, according to people briefed on the most recent round of results. Multiple public surveys this week have found Mr. Trump trailing Mr. Biden, the former vice president, by double-digit margins, including a Monmouth University poll published on Wednesday that showed Mr. Biden ahead by 11 percentage points…

Mr. Trump’s belligerent response to protests after the killing of George Floyd, a black man, while in the custody of white police officers in Minneapolis, appears to have worsened his political position even further, officials in both parties said. On an almost daily basis, he has issued a combination of wild threats and complaints about news media coverage and other personal grievances…

Signs of anxiety inside the Trump team are evident across the electoral map. Over the past few weeks, the president’s operation has spent about $1.7 million on advertising in just three states he carried in 2016 — Ohio, Iowa and Arizona — that it had hoped would not be competitive at all this year. Much of that sum went to a concentrated two-week barrage in Ohio, according to the media-tracking firm Advertising Analytics.

Trump is reportedly blaming his campaign for his slide rather than his own behavior, of course. “Biden has a team of killers and all I’ve got is a defense,” he’s supposedly said of a Democratic operation that’s kept their guy locked in a basement for three months and has spent most of its time running attack ads online that no one sees. He’s not losing because Team Biden is a well-oiled machine. He’s losing because he’s facing a trifecta of momentous social problems and seems either disengaged (coronavirus), powerless to do much to help (the economy), or on the brink of making things worse (sending in the troops to quell looting). The fact that his campaign is already spending money in Ohio and Iowa, which he won by 10 points four years ago, is proof enough without any polling data that the map is trending blue right now. His strategic challenge is that the sheer magnitude of the problems he’s suddenly facing has made it almost impossible to run an effective negative campaign against Biden. No swing voter cares about Burisma or Tara Reade at this point. Trump’s going to have to win people back by performing well. I don’t know what he’s hoping or expecting that Brad Parscale can do in the meantime.

The economy’s going to give him a boost later this summer when GDP starts growing again. That’s the best argument against caring much about his current numbers — we know the country’s mood will improve before November, and as it does, so will his chances.

Here’s George Will last night foreseeing a Biden victory this fall. “I’m fairly confident that he will be defeated, Mr. Trump will be defeated, in the election,” he says. “And the next morning, a lot of Republicans will say, ‘Trump? I don’t recognize the name.'” That’s a nice thought but it’s not true. Trump’s Twitter platform and cultish fan base will ensure that he’ll continue to exert influence over the GOP. All of the younger Republicans planning to run in 2024 will take care to stay on his good side in order not to alienate his voters. Donald Trump Jr seems to have political ambitions and may be a formidable candidate himself in the 2024 primaries. The Trump era doesn’t end when the Trump presidency does. It ends when a new cult leader comes along.

Oh, by the way: The Fox poll of Arizona that I mentioned up top has Martha McSally trailing Mark Kelly by … 13 points. A poll taken of the state last month also had her trailing by 13. She’s cooked. The GOP shouldn’t spend another dime on her.