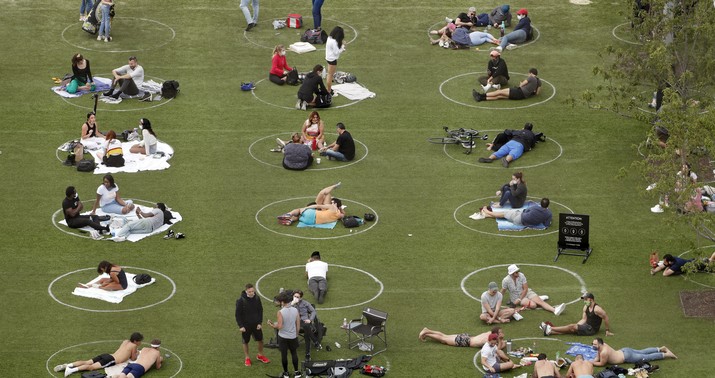 Having a public official admit to an error in judgment, especially one with deadly consequences, is completely foreign to an American in 2020. I don’t know how to process it.

It’s ironic that at the very moment the laissez faire attitude of American politicians towards the Floyd protests is leading people here to wonder if we overreacted to the epidemic, Sweden’s top man on fighting coronavirus is claiming that they underreacted. He’s not sure what they should have done differently, he says, but the fact that they had the highest deaths per capita of any country in the world over the past week (5.29 per million, higher than Brazil) suggests that their response has been sub-optimal.

One thing I don’t understand here: If you’re going for a “soft” herd immunity strategy, as Sweden was, you should expect deaths to be front-loaded, no? That is, one would think it’s far too early for Swedish officials to say they could have done better; at a minimum they’d want to wait until fall and see if other western countries are walloped with a second wave from which Sweden is spared.

Asked whether too many people in Sweden had died, [top epidemiologist Anders Tegnell] replied: “Yes, absolutely,” adding that the country would “have to consider in the future whether there was a way of preventing” such a high toll…

“If we were to encounter the same disease again knowing exactly what we know about it today, I think we would settle on doing something in between what Sweden did and what the rest of the world has done,” Tegnell said. It would be “good to know exactly what to shut down to curb the spread of infection better”, he added…

“Other countries started with a lot of measures all at once. The problem with that is that you don’t really know which of the measures you have taken is most effective,” he said, adding that conclusions would have to be drawn about “what else, besides what we did, you could do without imposing a total shutdown.”

He insisted in a separate interview that “the basic strategy has worked well.” I don’t know about that, buddy. Sweden is now fifth in the world among major nations in deaths per capita, having recently passed France. And while the number of daily cases isn’t growing, it’s not falling either:

But what could Sweden have done differently that would have amounted to something “in between” its current approach and what the rest of the world has done? Americans opposed to lockdowns have touted Sweden’s strategy as a model but their approach wasn’t wildly different from ours. They encouraged social distancing, banned mass gatherings, and closed schools for older students. (Tegnell said yesterday that he regretted that in hindsight, suspecting that the benefit from it in containing the disease was marginal.) Granted, they didn’t issue any stay-at-home orders, but there’s all sorts of data here at home showing that Americans began to practice social distancing voluntarily, before those orders were handed down, just like the Swedes have.

Maybe the lockdowns here helped tamp down the spread by forcing people to socially distance themselves longer than they would have if left to their own judgment. Or maybe Sweden should have closed its elementary schools like we did — although other European countries that have since reopened schools aren’t seeing a spike in cases, suggesting that they aren’t as much of an incubator as everyone feared. So again, what would an in-between approach for Sweden have looked like?

One obvious possibility: More testing. Sweden ranks a dismal 57th among all nations in tests per capita, at a rate less than half of ours. If they had tested more aggressively, maybe they would have been able to spot localized outbreaks in the early stages and intervened to limit them. The former state epidemiologist identified testing and contact tracing as one of the country’s three failures in managing the pandemic. Failing to lock down early and failing to take better care of nursing homes were the other two. But lack of testing can only explain so much: Sweden’s two Scandinavian neighbors, Norway and Finland, have fared much better in holding down deaths from COVID-19 but they’re not doing massively more testing. Norway ranks 40th in the world, Finland 47th. Again, both are behind the U.S.

It’s time to ditch Sweden as a model for the U.S. Luckily, there’s another less-restrictive model available that’s had much more success suppressing the virus: Japan. Read this op-ed published yesterday in the NYT from two researchers who studied hundreds of COVID-19 cases in Hong Kong and found that just 20 percent, all involving social gatherings, were responsible for 80 percent of all transmissions. The remaining 20 percent of transmissions came from another 10 percent of cases. Their takeaway: “Superspreader” events are fueling the pandemic, not widespread diffuse transmission across the breadth of the country. They speculate that Japan’s had a surprisingly good outcome on COVID-19 despite their lack of lockdowns because their containment strategy — avoiding closed spaces, crowds, and close-contact settings, the “three C’s” (plus lots of masks) — is well-suited to limiting superspreader events. We could follow their lead.

The phrase “is nothing sacred” seems to fall short here

Bari Weiss’ valediction: When the mob becomes the editor-in-chief of the NYT, it’s time to say goodbye

“Twitter is not on the masthead of The New York Times. But Twitter has become its ultimate editor.”

What’s the White House’s strategy in going after Fauci?

“it was never right to send COVID patients into nursing homes…”

Anything’s worth a try at this point I guess

McCloskey: We expect to be indicted any day now for standing up to the mob

“The only possible solution is for individual citizens to stand up and defend themselves.”

More Biden: Ya know what we should spend $2T on right now? Green energy

A trillion here, a trillion there, and before you know it…

Today’s great mystery: Why did California trash over 100,000 mail-in ballots in March?

Brooklyn Borough President: NYPD should bring back anti-crime units and stop the violence