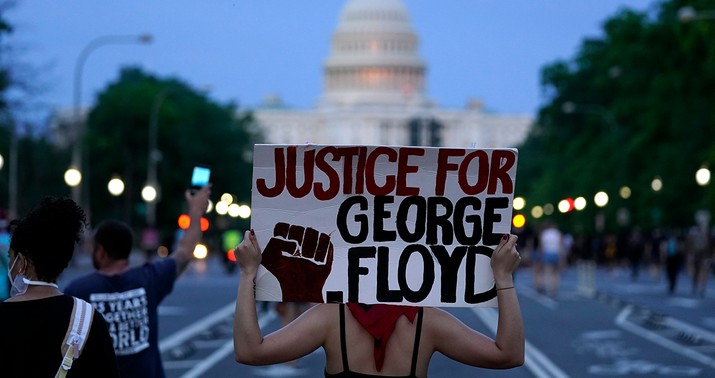 “Overcharging is a perennial risk in cases where cops are on trial because juries want to give the police the benefit of the doubt,” I wrote last week about the case against Derek Chauvin. “If you leave them room to do that, they just might.” George Floyd’s family wants first-degree murder but that’s a nonstarter since it requires premeditation, which would be all but impossible to prove given that the encounter between Chauvin and Floyd was by chance and Chauvin had no motive to kill him.

The appropriate charge seemed to be third-degree murder, which criminalizes the killing of a person via “an act eminently dangerous to others and evincing a depraved mind, without regard for human life.” The problem there is that the maximum sentence is only 25 years, hardly enough for what Chauvin did.

So murder one’s unprovable, murder three’s inadequate. Can Minnesota get him on murder two? Keith Ellison, the AG, is apparently resolved to try:

Ellison is expected to provide an update this afternoon on the state’s investigation into Floyd’s death. According to sources, former officer Derek Chauvin, recorded on video kneeling on Floyd’s neck as he begged for air on May 25, will now be charged with second-degree murder.

The other three officers at the scene — Tou Thao, J. Alexander Kueng and Thomas Lane — will also be charged with aiding and abetting second-degree murder, according to the sources, who spoke on conditions of anonymity. Chauvin was arrested last Friday and charged with third-degree murder and manslaughter.

Thao was recorded watching as Chauvin continued to press on Floyd’s neck with his knee. Kueng was one of the first officers on the scene and helped pin Floyd down. Lane was detailed in earlier charges as pointing a gun at Floyd before handcuffing, and later asked whether officers should roll Floyd on his side as he was restrained.

Second-degree murder in Minnesota is the intentional killing of a person without premeditation — a heavy lift given that, again, Chauvin had no reason to want Floyd dead. What he’s guilty of is horrendous abuse and wanton indifference to the life of the man in his custody, not actively seeking his death. Third-degree murder seems like a safer charge.

But wait. Amy Swearer of the Heritage Foundation has been sifting through Minnesota’s case law and discovered a problem with charging Chauvin with murder three. It’s not as good a fit as it seems. In fact, it may be that Chauvin can’t be convicted of third-degree murder. Swearer explains:

As the state’s highest court stated in State v. Barnes (2006), unlike other forms of murder, “[d]epraved mind murder … cannot occur where the defendant’s actions were focused on a specific person.”…

In other words, third-degree murder is for acts such as drunk driving that causes the death of another motorist. The person did not direct his wantonly dangerous acts toward a particular motorist, but his or her acts were nonetheless without regard to the lives of other motorists generally.

Third-degree murder would work if, say, you recklessly fired a gun in the air towards a distant crowd and the bullet ended up killing someone in it. It’s random death resulting from depraved recklessness. Floyd’s death wasn’t random. Minnesota has a problem.

But Ellison has a problem with second-degree murder too, as I noted. It requires intent — or does it? In fact, there are two parts to the murder-two statute, one dealing with intentional killings and the other with unintentional killings. Swearer pointed to the second part of the statute in her analysis. What if Chauvin is tried for the same crime with which the McMichaels have been charged in Georgia for the killing of Ahmaud Arbery, namely, felony murder? The statute:

Whoever does either of the following is guilty of unintentional murder in the second degree and may be sentenced to imprisonment for not more than 40 years:

(1) causes the death of a human being, without intent to effect the death of any person, while committing or attempting to commit a felony offense other than criminal sexual conduct in the first or second degree with force or violence or a drive-by shooting

The McMichaels are charged with aggravated assault of Arbery; the murder charge stems from the fact that that assault resulted in his death. The same logic could be applied to Chauvin. What began as a lawful arrest by a police officer turned criminal when Chauvin kept his knee on Floyd’s neck for nearly nine minutes total, during much of which time Floyd was pleading for air, and for more than two and a half minutes after Floyd lost consciousness. If Chauvin is guilty of assault for that, he’s guilty of second-degree murder for Floyd’s death. And that allows for a maximum sentence of 40 years, not on par with murder one but somewhat steeper than murder three.

That’s probably what Ellison is going for with the elevated charges, which I assume means he’ll also be charged with assault this afternoon. (Right now he’s charged with third-degree murder and second-degree manslaughter.) If not, if he’s going to try Chauvin for intentionally killing Floyd, he’s really rolling the dice. Presumably the argument would run along the same lines as the argument for assault — because Chauvin refused to relent even after Floyd complained that he couldn’t breathe and then passed out, we should infer that an intent to kill developed over those nine minutes. I think that argument is a recipe for disaster, but we’ll see.

As for charging the other three cops, I saw it reported somewhere recently (can’t remember where) that Trump had been telling advisors that he thought the protests would calm down once they’re charged. I think they’re beginning to calm down already but yeah, this can only help.

Four Forgotten Heroes Of The War of Independence