Trump to governors: You should consider banning flag-burning because we have a conservative Supreme Court now 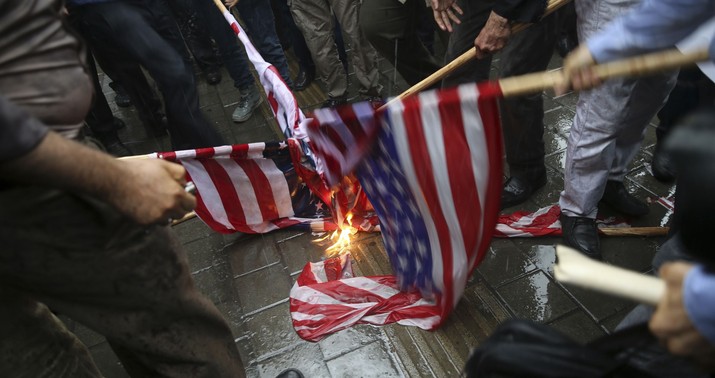 I think this is why some members of his staff don’t want him to talk much right now. You just don’t know what’s going to come out of his mouth once he does.

That’s not to say that banning flag-burning is unpopular. To the contrary. It’s a matter of priorities, though. If there’s a plague spreading, and an economy tanking, and a raft of businesses being looted, the legality of torching Old Glory is a weird thing to be occupying part of your headspace.

Although, in fairness to him, it’s a recurring interest. Here’s what he tweeted three weeks after being elected president in 2016:

Nobody should be allowed to burn the American flag – if they do, there must be consequences – perhaps loss of citizenship or year in jail!

“Fine the flag-burners” is one thing. Strip the flag-burners of their citizenship is major-league nationalist demagoguery. Maybe he brought it up today to the governors because, at a moment of chaos and anxiety, it’s a comfort psychologically to retreat to issues that are clear and simple. How do you stop a virus that’s killed 100,000 people? How do you revive an economy in which 40 million people have laid off? How do you deter the looters without doing something so heavy-handed that it makes the outrage over police brutality?

Those are momentous problems. What if we laid them all aside and focused on banning flag-burning instead?

Trump, who as a candidate in 2016 proposed jail time or loss of citizenship for burning the American flag, called the act a “disgrace” on Monday and pledged support for an “anti-flag burning” statute.

“We have a different court and I think that it’s time that we review that again. Because when I see flags being burned — they wanted to crawl up flag poles in Washington and try and burn flags but we stopped them,” the President told governors, according to audio of the call obtained by CNN. “They’re weren’t able to do it. They would’ve done it if we didn’t stop them. I think it’s time to relook at that issue, hopefully the Supreme Court will accept that.”

He continued: “If you wanted to try to pass a very powerful flag burning statute again — anti-flag burning, I hope you’ll do it because we’ll back you 100% all the way. Okay? I hope some of you do it.”

Was there video of flag-burning from the protests that went viral this weekend? Or did Fox run some footage? I don’t know where this came from.

But I hope some red state somewhere listens to him and does it. I don’t support banning flag-burning but I’m morbidly curious to see how SCOTUS would handle the inevitable constitutional challenge and, especially, how Trump would react to their decision. He seems to think he’d get a 5-4 conservative majority, but I don’t know why he thinks that. How can someone seriously believe John Roberts would defy liberal conventional wisdom by rubber-stamping a ban on flag-burning? A guy who’d crawl out on the furthest limb to uphold ObamaCare isn’t going to bless a ban on symbolic speech, especially when he has Antonin Scalia to back him up in opposing it.

Roberts isn’t the truly intriguing vote on flag-burning, though. That belongs to the libertarian-minded Neil Gorsuch, famously appointed by Trump himself. The president thinks Gorsuch would deliver for him in a matter like this. I beg to differ and I have receipts. From an essay Gorsuch published last year in Time magazine:

Of course, some suggest that originalism leads to bad results because the results inevitably happen to be politically conservative results. Rubbish. Originalism is a theory focused on process, not on substance. It is not “Conservative” with a big C focused on politics. It is conservative in the small c sense that it seeks to conserve the meaning of the Constitution as it was written. The fact is, a good originalist judge will not hesitate to preserve, protect, and defend the Constitution’s original meaning, regardless of contemporary political consequences. Whether that means allowing protesters to burn the American flag (the First Amendment); prohibiting the government from slapping a GPS tracking device on the underside of your car without a warrant (the Fourth Amendment); or insisting that juries—not judges—should decide the facts that increase the penalty you face in a criminal case (the Sixth Amendment). In my own judicial career, I’ve written many originalist rulings with so-called “liberal” results.

That’s 6-3 against a flag-burning ban, with Roberts and Gorsuch joining the liberals. I think Alito would be a safe-ish vote for Trump and probably Kavanaugh too. Thomas’s vote would be fascinating, though, as he could go either way. On the one hand, he’s an originalist like Gorsuch. On the other hand, he voted to uphold a Virginia statute in 2002 that banned cross-burning, reasoning that “just as one cannot burn down someone’s house to make a political point and then seek refuge in the First Amendment, those who hate cannot terrorize and intimidate to make their point.” He’s not opposed to letting a ban on certain forms of symbolic speech stand, in other words. The question is whether flag-burning and cross-burning are actually comparable. Cross-burning is a threat, Thomas argued; if you’re a black American and a cross is burned in your community, you have good reason to fear for your life. Threats aren’t protected by the First Amendment. But flag-burning doesn’t have the same threatening connotation. Which way does Thomas go on that?

We’re not going to find out because we’re probably not going to see any flag-burning bans passed this year unless Trump really digs in on it and starts hectoring red states to do it. He’s got a full plate. Can’t be more than a … 80 percent chance he’ll start obsessing about it.