Doctors: Yes, these protests are probably going to cause a spike in coronavirus cases 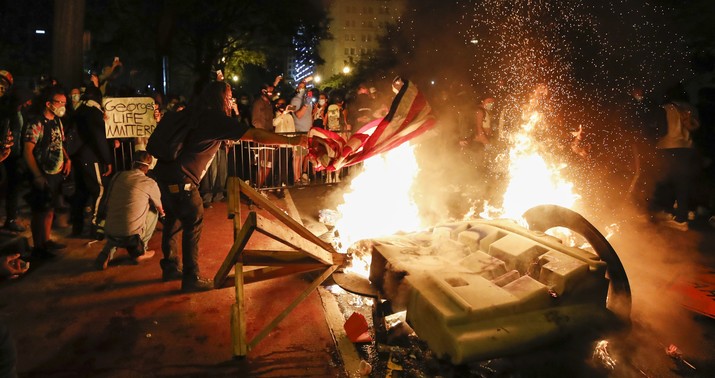 Under the worst of circumstances, a chunk of the country has decided to embark impromptu on a major scientific experiment. In a few weeks we’ll have a decent idea of just how transmissible the coronavirus is in mass gatherings of mostly young adults taking place outdoors in warming weather.

Calling it an impromptu experiment is too flip, though. After all, anti-lockdown protesters held their own “experiments” at state capitols in April and got endless grief for the risk they created to themselves and people they’re in contact with. Why is it, asked Robby Soave, that the likes of Gavin Newsom ended up hyperventilating about people ignoring stay-at-home orders for that but now that others are ignoring them en masse to protest police brutality all he can do is mumble about solidarity? “Media and government experts who fail to consistently call out social distancing violations risk giving the impression that their commitment to zealous enforcement of public health measures wasn’t as absolute as they claimed,” wrote Soave. “It turns out they are willing to make exceptions for their preferred causes.”

Indeed. If you want to be charitable, you might say that it’s pointless for Newsom to try to discourage people from mass demonstrations under the present circumstances. Anyone who’s willing to risk a dangerous confrontation with armed cops to voice their outrage about George Floyd — or to loot, or to just smash sh*t up like Antifa — isn’t going to be turned back by finger-wagging about social distancing. But Soave’s read is fair too. Maybe for Newsom there’s a hierarchy of values here: Protesting social injustice is more important than containing the spread of a novel deadly disease, whereas containing the spread of a novel deadly disease is more important than, uh, employment for 40 million people.

It’s not just that the density of mass gatherings like protests that make them dangerous, say doctors. It’s particular types of behavior at protests that heighten the risk. Granted, there are aspects of the demonstrations that should reduce the threat — they’re outdoors, participants are young, many are wearing masks, people are typically in motion rather than standing still and breathing the same air. But:

“Yes, the protests are outside, but they are all really close to each other, and in those cases, being outside doesn’t protect you nearly as much,” Dr. Markel said. “Public gatherings are public gatherings — it doesn’t matter what you’re protesting or cheering. That’s one reason we’re not having large baseball games and may not have college football this fall.”

Though many protesters were wearing masks, others were not. SARS-CoV-2, the virus that causes the Covid-19 disease, is mainly transmitted through respiratory droplets spread when people talk, cough or sneeze; screaming and shouting slogans during a protest can accelerate the spread, Dr. Markel said.

Tear gas and pepper spray, which police have used to disperse crowds, cause people to tear up and cough, and increase respiratory secretions from the eyes, nose and mouth, further enhancing the possibility of transmission. Police efforts to move crowds through tight urban areas can result in corralling people closer together, or end up penning people into tight spaces.

Tear gas may also cause protesters to remove their masks to reduce the discomfort.

And it’s not just what happens at the protest that matters, it’s what happens around the protest. “If they’re stopping in restaurants, using public bathrooms, and taking public transportation, all of those things are helping the virus move from one place to another because humans are vectors,” said one expert to the Daily Beast. That reminds me of this WSJ report about the soccer match in Italy in mid-February that scientists believe seeded the catastrophic outbreak in Lombardy. It wasn’t just fans breathing the same air inside the stadium that spread the virus, they believe. Social activity in more confined quarters before and after the match doubtless helped too: “Atalanta supporter Luca Brignoli, 57, thinks back to his subway ride to the San Siro from downtown Milan, bodies jammed against the door. He remembers milling around the piazza in front of the stadium, where fans from both sides mixed and drank and snacked from food trucks. He wonders how many people might have coughed or sneezed while navigating the stadium’s turnstiles and narrow passages.”

There’s an X factor lurking here, though, that may be leading people to show more caution about predicting a new outbreak from the protests. I speak from experience on this. When voters in Wisconsin lined up in mid-April for their primary, I remember seeing photos of them queued up by the thousands and thinking, “Here comes the second wave.” Nope. Didn’t happen. Then the anti-lockdown protesters descended on state capitols, gathering by the hundreds in small spaces. “Ah, *here’s* the second wave,” I thought. Nope, wrong again. No major outbreaks from those either. “At this point, Adalja says that he hasn’t seen any data demonstrating that people who attended the reopening protests ended up contracting COVID-19 at higher rates,” said Rolling Stone of one scientist it interviewed. Just this afternoon I got another reminder via political Twitter:

Remember that? Some preliminary CDC modeling leaked suggesting that reopening would lead to a 50 percent increase in deaths by now from the 2,000 or so daily we were averaging at the time. Deaths are actually down about 50 percent since then.

The X factor, in other words, is humility about what we do and don’t really know about this virus after living with it for three months. Why are some people severely ill and others end up asymptomatic? Scientists don’t know. Do children spread it or are they immune? Scientists are examining it. Is the warmer weather helping to suppress the virus? Could be, but Brazil is pretty warm and they’re the worst hot spot on Earth right now. Are there multiple strains of virus out there, with the less deadly strain affecting most of the country? Could be, but nothing definitive so far. Are masks useful to limiting infection? Pretty clearly yes, but whether they’re somewhat useful or a total gamechanger remains uncertain.

We don’t know much of anything, even now. So although mass demonstrations seem like a really dangerous idea, would anyone want to bet the mortgage that we’ll see a second wave after all the previous doomsaying didn’t pan out?

Still, doctors seem pretty confident that we’ll have an uptick of some sort, even if it’s not apocalyptic. “I don’t think there’s a question of whether there will be spikes in cases in 10 to 14 days,” a researcher at Harvard told the Atlantic. “With so many protests happening, that are getting so much bigger, I don’t think it’s a question of if, but when and where.” Only one scientist in any of the articles about this that I’ve read today explicitly condoned the protests *despite* the risk that they’ll contribute to the spread. I’ll leave you with that, from the same Atlantic piece:

“I personally believe that these particular protests—which demand justice for black and brown bodies that have been brutalized by the police—are a necessary action,” she said. “Structural racism has been a public-health crisis for much longer than the pandemic has.”