Biden: We need to teach cops to aim for the leg in shooting people instead of the heart 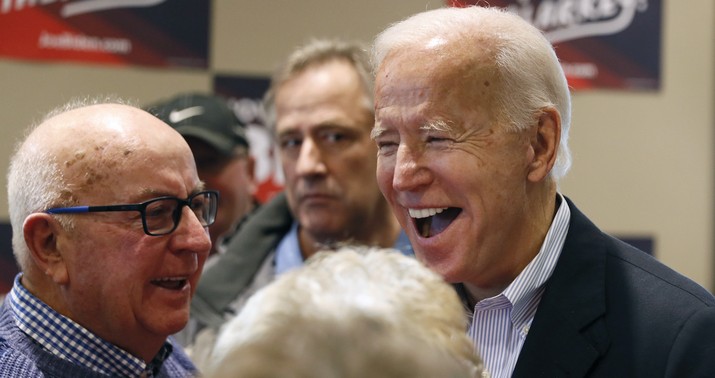 Lay aside the logistical problems in what Biden says, like the fact that many suspects will die anyway from being shot in the leg as their femoral artery is severed. Or the improbability that an officer in a life-and-death situation will shoot to wound when the criminal he’s confronting has a deadly weapon and aims to kill. As Ed says, “You aim for center mass to minimize the probability of missing your target and HITTING SOMEONE ELSE.”

It’s the political implications that make this next-level goofy. It’s practically self-parody given the progressive view of Biden as a retrograde establishment politician, particularly on the subject of criminal justice.

A Twitter pal summed up his view this way: “Biden 2020: What if We Shoot the Black People Differently.”

Biden today said "there are a lot of different things that can change" about police training. One example he said was if cops are rushed by an "unarmed" person "with a knife or something" the cops could "shoot them in the leg instead of the heart is a very different thing."

This is the same guy who once told his wife that if she ever had reason to fear for her safety at home, she should walk out on the balcony of their home and fire two blasts from a double-barreled shotgun.

Asking cops to shoot suspects in the leg actually represents progress for him on gun safety.

No more kneeling on people’s necks while they gasp for air either. From now on, in the Biden era, if a cop wants to choke someone for nine minutes, he has to use his elbow.

Knee-chokes will be limited to six minutes, tops.

I don’t know. Maybe Biden’s just trying to overcorrect for the radical trash in his base who swoon at the sight of windows being smashed and businesses being burned:

Should we file away Biden’s shoot-’em-in-the-leg comment as further evidence of senescence? The GOP’s eager to convince voters that he’s lost a step mentally; every time he has an awkward moment in an interview — and there’s usually one or more in *every* interview — they clip it and upload it to YouTube, part of their “Biden has dementia” pitch to the electorate. The problem is that, per WaPo’s new poll, voters seem to think mental “sharpness” is more of an issue for Trump than for the Democrat. Here’s Biden’s polling on an array of personal attributes. Note “e”:

And here’s Trump’s polling on the same questions:

On only one of those five measurements does Trump outpoll Biden, but it’s a big one in light of the country’s momentary paralysis by street violence: “Strength.” Lefties and righties on political Twitter spent the weekend chattering about whether the riots will end up helping Trump in November by enhancing the case for a strong, “law and order” president. That’s how Nixon got elected in 1968, isn’t it? Right, says Philip Klein, but there’s a momentous difference between Nixon and Trump. Nixon was the challenger; he could watch from the sidelines as the sitting president, LBJ, struggled to quiet the tumult and vow that things would be different once he was in charge. Trump is LBJ, not Nixon:

[A]s the incumbent, it’s much harder to run on a message to restore law and order when major American cities descended into chaos under your watch.

When I noted this on Twitter, the defense of Trump was that the violence is happening in cities run by Democrats. But that doesn’t really change anything. Reelecting Trump won’t change Democratic control of the cities. So if Trump was unable to overcome Democratic mismanagement of urban centers and restore order in his first term, why would he be able to do so in a second term?

One could also imagine Joe Biden arguing to white suburbanites that the way to restore order is to address the root causes of the violence and to have a president who doesn’t say incendiary things during an already volatile situation.

One could just as easily read Nixon’s appeal in 1968 the way Benjy Sarlin does, as a return to normalcy after an era of upheaval. In which case Biden is a better analogue:

People keep making Nixon/Trump comparison with law and order, but may be just as relevant than Nixon and Biden are both extremely square two-term VPs offering something familiar in midst of chaos.

Fine points all, but the correct answer to the question of whether the riots will help or hurt Trump this fall is that most voters won’t even remember them because we have 5,000 insane news cycles to endure between now and then. Remember when impeachment was going to be a factor in November? Now we have a pandemic, an economic collapse, and riots over police brutality. We’ll probably have an alien visitation or The Rapture before Election Day at the rate we’re going. That’s where I’m focusing my own pundit energies, in fact: “What effect will The Rapture have on Trump’s ability to turn out evangelicals?” Not looking good for him, I have to say.