WH aides tell CNN: Trump was supposed to address the riots in Minnesota at today’s presser, but didn’t 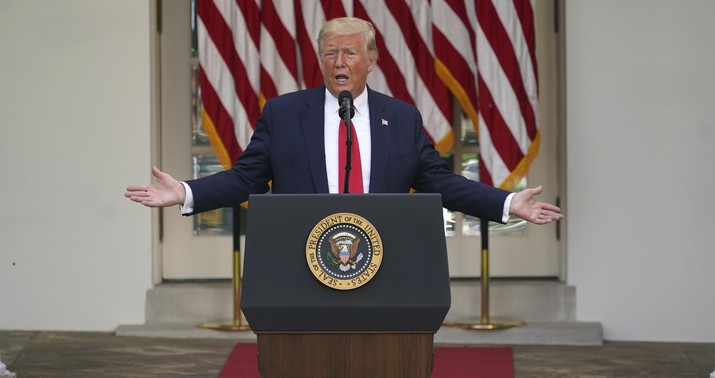 Whoever made the decision to have him avoid this topic in front of the cameras and stick to China instead deserves an extra scoop of ice cream for dessert tonight.

Multiple White House aides told CNN that there were plans in place to have President Trump address the violence in Minnesota at that Rose Garden event — it remains unclear why he did not.

Reporters and other assorted critics are grumbling that he didn’t seize the opportunity to heal the nation or whatever, especially on a day when Biden and Obama have made statements about the horror of George Floyd’s death and ensuing riots. But the criticism seems disingenuous. Do you … really want to see Trump tackle these subjects? Or do you just want to dunk on him when his attempt inevitably goes wildly off the rails?

The president is an utter disgrace. What a wasted opportunity to address a grieving, angry, traumatized, suffering — and by the way, still sick — nation, to ignore what's happened in Minneapolis and instead drone on about China. That's not leadership. It's cowardice.

Here’s how it would have gone if he had spoken about Floyd and Minneapolis. He would have delivered a short scripted statement expressing his condolences and calling for calm, which would have been perfectly fine. Then reporters would have started asking him what he meant by this tweet last night.

What did he mean that “the Military” is with the governor? How does he intend to “assume control”? When he said, “when the looting starts, the shooting starts,” was he thinking of shooting just the dangerous looters who are throwing molotov cocktails or mowing down anyone who’s caught carrying a TV out of Target willy-nilly?

God only knows what he would have said.

He, or whoever’s posting at his account, tried to clarify the looting/shooting point shortly before he went to the Rose Garden to speak:

….It was spoken as a fact, not as a statement. It’s very simple, nobody should have any problem with this other than the haters, and those looking to cause trouble on social media. Honor the memory of George Floyd!

His tweet last night sure made it sound like the military would be doing the shooting but here he’s saying that all he meant was that other people, like business owners, would have to shoot to protect themselves and their property from looters.

Is that what he meant, though, or just something his staff convinced him to say to try to turn down the heat? Remember that his advisors talked him into cleaning up his Charlottesville comments three years ago, only to have him grow so annoyed afterward at the fact that he had to walk back his honest opinion that he ended up holding another press conference and doubling down on it. Imagine being, say, Kellyanne Conway this afternoon and having no idea what the boss would say when asked about killing looters at a fraught moment of violent racial unrest in an American city. Would he stick to his position that business owners need to defend themselves or would he just go all-in and say, “Yes, our soldiers are very well armed and know how to deal with terrorists”?

I’m going to guess Kellyanne was in the “don’t take any questions today” camp.

Even if he navigated the delicate topic of killing looters without doing much damage to himself, reporters would have steered him around to his new hobbyhorse — Twitter messing with his tweets. They concealed his post about looters last night on grounds that it “glorified violence,” a thumb in his eye and a show of defiance the day after he signed his executive order about social media bias. You can guess how today’s Q&A would have gone:

My guess is that his back-and-forth with reporters about how victimized he feels by a tech company would have dragged on longer than the George Floyd section of the presser, likely with more heartfelt emotion. Which would have been a bad look during an ostensible moment of national consolation by the head of state. He ended up deciding to duck the whole subject. Smart of him and of his team.

Here’s two clips from this afternoon. One is of the president expressing his condolences at an event after the Rose Garden presser and the other is a new ad from anti-Trumpers punishing him for his earlier silence. They should be grateful.