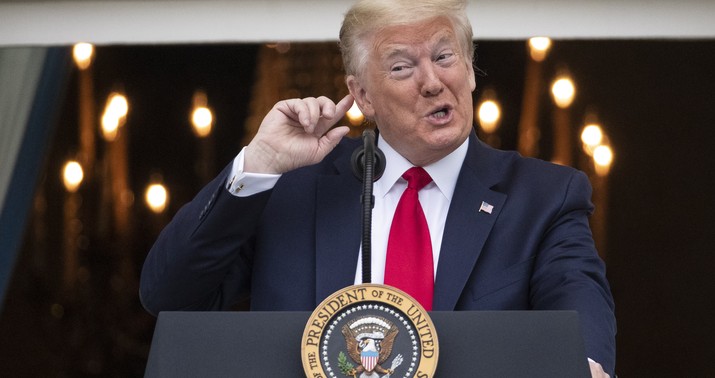 Surely some accommodation can be reached between Twitter’s need to police its own terms of service and the president’s need to viciously smear his critics.

What if Twitter allowed him to keep tweeting about Lori Klausutis but changed his username to “I’m a Garbage Person With a Garbage Brain”?

There’s room for compromise there too if need be. Maybe Trump would agree to “I’m a Garbage Person” as his username without the “Garbage Brain” part. Or vice versa.

Let’s work this out like adults, is what I’m saying.

WaPo approached Klausutis’s family over the weekend and asked about Trump using their late daughter as a prop in his vendetta against Scarborough, but they declined to comment. For good reason: “No one in Klausutis’s family would talk about Trump’s tweets for this article, fearing retaliation by online trolls of the type who went after parents of the Sandy Hook massacre victims.” A special privilege of the Internet age if your relative dies in a way that has political ramifications is being harassed by the dregs of humanity afterward, potentially for years. Klausutis’s family has an admirably firm grasp, via painful firsthand experience, on how depraved our culture has become.

But although none were willing to speak to the Post, one family member was willing to speak to Twitter. Timothy Klausutis, Lori Klausutis’s husband, sent a letter to management over the weekend asking them to treat Trump the way they’d treat any other user of their platform and remove his tweets implying that Klausuits was murdered. You can read his letter in full here. By no means is Trump the first troll to insinuate foul play about his wife’s death, notes Klausuits, but as the nominal leader of the free world he does have a unique ability to amplify the smear.

Normally Trump would be nudging his friends at the National Enquirer to impugn Scarborough over Klausutis’s death on his behalf but that relationship probably isn’t what it used to be ever since David Pecker cooperated with the feds in the Stormy Daniels matter. Is there no one in Fox primetime who’ll step up and play the Enquirer’s part by doing the president’s dirty work for him? Hannity took an interest in the Seth Rich conspiracy theory awhile back. Where is he when Trump needs him on this?

King Troll’s reaction to the news of Timothy Klausutis’s letter this morning was to … keep tweeting about Scarborough and Lori Klausutis:

….about whether or not Joe could have done such a horrible thing? Maybe or maybe not, but I find Joe to be a total Nut Job, and I knew him well, far better than most. So many unanswered & obvious questions, but I won’t bring them up now! Law enforcement eventually will?

NYT columnist Kara Swisher (who published Klausutis’s letter in her column today) says that one solution being considered by Twitter is “is to label the tweets as false and link to myriad high-quality information and reporting that refute the tweets’ sinister insinuations.” Deleting the tweets is another possibility. Either way, the company’s destined to end up in a spat with Trump, a scenario they’ve long tried to avoid because of suspicions that he’s willing to use certain forms of state power to punish his corporate enemies. (Ten days ago he suggested that it was illegal for the “Radical Left” to control Google, Facebook, Twitter, and Instagram, which it definitely is not.) At the barest minimum, he’s going to grouse loudly about whatever new restrictions Twitter places on him and possibly start using another social media platform, like Facebook. Then he’ll be Mark Zuckerberg’s problem.

But Twitter has no choice. This fracas has now reached a sufficient level of visibility that they’re going to have to do something:

Twitter statement re: Trump's tweets about Lori Klausutis: "We are deeply sorry about the pain these statements… are causing the family." Changes are in the works to "expand existing product features and policies so we can more effectively address things like this going forward" pic.twitter.com/JxiYmaYYL4

Are they sure they don’t want to try to just ride this out? He’ll tweet something even more obnoxious soon enough, likely at a less sympathetic target than the Klausutis family, and we’ll forget all about this. The nice thing about showing that you’re unfit for office every day is that your critics never have time to dwell on yesterday’s evidence. All Twitter needs him to do is provide a new shiny object that’s not quite so uncomfortable to handle. Give him a few hours.

Here’s Scarborough digging in on this earlier this morning. I’ll leave you with a point I saw made on Twitter that’s jarring but also eminently true: Trump would be just fine with the idea of Scarborough having killed an aide if “Morning Joe” was still in the pro-Trump camp. The president practically admitted it in his tweets today, claiming that he’d heard the smears against Scarborough for years and never ruled them out when they were on friendly terms — but went on being friendly with him anyway. And why not? Trump’s idea of morals is purely transactional: There’s no sin he won’t happily overlook so long as you’re on his side. You could shoot someone on Fifth Avenue and you wouldn’t lose his vote of confidence in you — until you start badmouthing him. That’s what offends Trump about Scarborough, not his non-murder of a former aide.