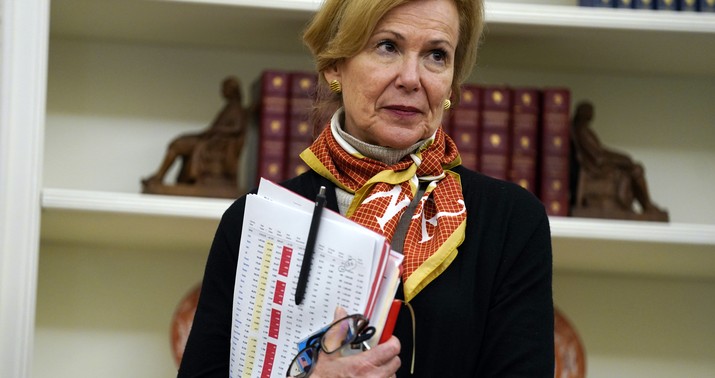 The wearisome debate over reopening the states for business slogs on this morning with a head-spinning array of doctors, economists, politicians, and business owners on the Sunday shows. The star guest is Deborah Birx, who’ll explain to “This Week” and “Fox News Sunday” why her task force now seems to pay only glancing attention to its own federal guidelines on reopening. Are there any states that she thinks should slow down or do her boss’s political interests prevent her from saying?

One guest of note who isn’t scheduled to discuss COVID-19 or its economic fallout is national security advisor Robert O’Brien. His plate is suddenly full thanks to deepening animosity between the U.S. and China, particularly after Beijing’s move last week to swallow up Hong Kong’s autonomy. What penalties will China pay for that? Sanctions on Chinese officials? Rescission of the special trade status that Hong Kong enjoys from the U.S. that exempts it from American tariffs? How about, er, renewed nuclear testing? He’ll discuss with “Meet the Press” and “Face the Nation.”

Also worth watching this morning: Democratic Rep. Val Demings, who’ll sit down with “State of the Union.” Demings is on Biden’s VP list and, although she’s a long shot, there’s a case for her. She’s a woman, African-American, and represents a district in Florida, the most lucrative battleground on the map in terms of electoral votes. If adding Demings to the ticket could flip that state, it would leave Biden needing to convert just one more red state from 2016 anywhere on the map to win the presidency. She’ll be asked about her prospects of getting the nod and of course about Biden’s obnoxious comment on Friday that if you don’t prefer him to Trump then “you ain’t black.” The full line-up is at the AP.