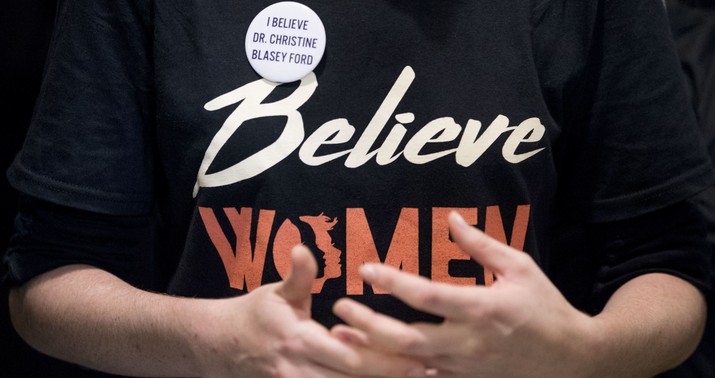 I see. Could it be that we hallucinated all of those maximalist statements about alleged victims’ credibility?

I didn’t think we hallucinated them. But we live in strange times. I suppose collective delusions are possible.

The fundamental questions we must answer right now:

Do we value women?
Do we believe women?
Do we give them the opportunity to tell their story? To be heard?
Will we ensure they get the justice they deserve?

We must fight to be a country that answers, “Yes,” every time.

It’s a pretty elaborate delusion, in any case.

Every survivor of sexual assault deserves to be heard, believed, and supported. https://t.co/mkD69RHeBL

By using the term “survivor,” did they mean “Believe all women who actually did endure a sexual assault”? Because that proposition would be so uncontroversial as to be banal, hardly worth the rhetorical effort spent on #MeToo activism over the past three years. It’d be like saying, “Believe people who are telling the truth.” It’s also useless as an adjudicatory principle since what we’re looking for is a threshold of belief to trigger a criminal or professional inquiry, not resolve it. Of course we believe people whose account has been borne out after the evidence has been examined. What we want is a standard for how much attention we should devote to the initial claim.

Is Tara Reade a “survivor”? Should Joe Biden be the subject of some sort of formal investigation because of the increasingly doubtful story Reade tells of him sexually violating her?

My favorite part of this Susan Faludi piece is her admitting after reviewing many “Believe All Women” tweets that yes, okay, some feminists really are using that slogan in earnest. But the right is still to blame for distorting the left’s position.

Spend some mind-numbing hours tracking the origins of “Believe All Women” on social media sites and news databases — as I did — and you’ll discover how language, like a virus, can mutate overnight. All of a sudden, yesterday’s quotes suffer the insertion of some foreign DNA that makes them easy to weaponize. In this case, that foreign intrusion is a word: “all.”…

In my online searches, I encountered some feminists who seemed genuinely to subscribe to the phrase. But overwhelmingly, the Twitterati deploying the phrase were conservatives, wielding it as a whip. Why?

Because the right knows what #MeToo activists do well to keep in mind: Peril lies in purity. If the pluralism of the women’s movement can be reduced to rigid boilerplate in the public mind, then the future of #MeToo will have more to lose from a single untruthful woman whom it’s sworn to defend than from boatloads of predatory men.

This is why “Believe All Women” is not an amplification of “Believe Women,” but its negation.

Ramesh Ponnuru cuts to the heart of the dishonesty. Whether you’re demanding that we “Believe Women” or “Believe All Women,” the point of your activism is to switch the presumption from innocence to guilt when a woman accuses a man of sexual misconduct. If you take Faludi’s argument seriously about the alleged significance of the word “all,” the entire history of #MeToo rhetoric from Weinstein to Kavanaugh to Biden is aimed at nothing more interesting than believing women who deserve to be believed and not believing women who don’t deserve to be believed, which is all but meaningless as a political position. (“Believe Some Women” would be one of the most laughably ridiculous slogans in American history.) Although it does have the hidden virtue of accurately stating the left’s real position on this. Believe the women who deserve to be believed, i.e. women who accuse men who are either actively antagonistic to the left (Kavanaugh) or of no real political use to them (Weinstein). And don’t believe women who don’t deserve to be believed, i.e. women who accuse men in whom the left has a lot invested, be it Joe Biden now or Bill Clinton 20 years ago or basically the entire Kennedy family years before that.

Ponnuru also noticed this sarcastic line in the opening of Faludi’s piece, referring to the Reade/Biden matter: “A woman, with no corroboration beyond contemporaneous accounts, charges a powerful man with a decades-old crime? Hmm, doesn’t that sound mighty close to Christine Blasey Ford’s complaint against Supreme Court nominee Brett Kavanaugh?” Uh … no, it doesn’t, because Christine Blasey Ford didn’t have any contemporaneous corroboration. If Faludi’s managed to delude herself about the strength of Ford’s case, it follows that she’d delude herself about the true meaning of “Believe Women” because it’s now convenient for Democrats to strike a much more moderate pose on that subject now their party’s nominee is the one on the hot seat.

The “tell” in all this is that, although righties have described the left’s #MeToo position as “Believe All Women” since Kavanaugh, we saw scarcely any pushback on the alleged mischaracterization from the left until the Biden/Reade thing. Suddenly, at the moment it became expedient for Democrats not to have to believe all women, we were informed that “Believe Women” simply means listening respectfully to accusers before patting them on the head and dismissing them out of hand for reasons of political convenience. How come Faludi didn’t write this piece a year ago, gently instructing righties who thought the left wanted all accusers to be believed that, you see, they wanted nothing so radical as that? Somehow it took the Democratic nominee being imperiled by a #MeToo claim for the record to be belatedly corrected.

Anyway, the Times op-ed page should really hash this out amongst themselves. Centrist liberal Bari Weiss complained in a column written nearly a year before the Kavanaugh hearings that the “huntresses’ war cry — ‘believe all women'” might just create some knotty due-process problems down the road. Weird how she misunderstood what feminists were demanding in the same way that the rest of us did. For your exit quotation, I leave you with a hypothetical from our own John Sexton.

So if I build a massive political campaign organized around the slogan #BelieveMen can I come back in 18 months and explain that I never said "Believe All Men" and always really had lots of nuance in mind?

Asking for a friend.