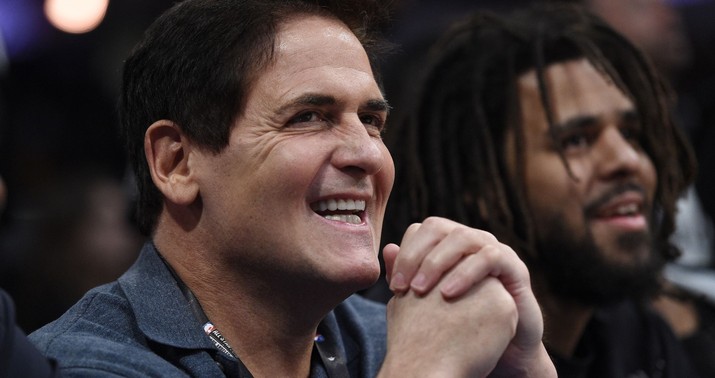 Way to narc on some American patriots just doing their part to build a little herd immunity, buddy.

Next thing you know big government will be sending “health inspectors” into restaurants to make sure they’re cleaning the kitchen every day.

I’m glad he did this. If we’re going to throw caution to the wind and reopen early, the least we can do is make sure business owners are taking basic precautions to protect customer safety. Letting them know that someone’s paying attention to state protocols — even if the state itself isn’t — will boost compliance. It’ll also get consumers thinking harder about the protocols. Knowing that so many businesses are skimping on COVID-19 safety measures will make them more attentive to those measures in businesses they patronize.

Cuban’s post has a bunch of images embedded in it but I can’t get them to load so I’m not sure which “mandatory safety protocols” his team policed for. I think he’s describing the guidelines posted by Texas’s Department of Health and Human Services before the state reopened. Here’s a sample from the safety checklist for retailers:

There are other rules. For instance, at the moment retailers can operate only at 25 percent of listed occupancy. They’re “encouraged” to enable contactless payment. There are separate checklists for all sorts of other entities — restaurants, churches, movie theaters, museums, on and on.

3) Aggregate Degree of Safety Protocol Compliance – By Protocols: On average, ~60% of mandatory protocols were followed and ~54% of all suggested protocols were followed. In aggregate – locations followed ~58% of all mandatory + suggested protocols. The following chart shows an aggregate view of all protocols and the degree of *non-compliance* (the top is what is not followed and the bottom is what is more followed) in order of most to least non-compliant across locations.

As for how many businesses chose to reopen, just 36 percent in the heart of Texas. This “paint[s] a picture of a large degree of latent fear in the marketplace,” says Cuban. One smart thing he’s going to do is have the “shoppers” revisit some of the locations they’ve already been to over the course of this month to see if compliance is getting better or worse. I can imagine it going either way. The case for it getting better over time is that everyone’s been caught flat-footed by the crisis and is scrambling to cope. Gotta give retailers a little time to install plastic separators in their retail space and stock up on hand sanitizer, etc. Can’t expect perfection on day one.

But Cuban might say, “If they can’t promise perfection then they shouldn’t be open.”

The case for compliance getting worse over time is that as consumers get more comfortable visiting retail spaces and business picks up, retailers might start cutting corners on safety. That is, in some cases the safety precautions may be largely cosmetic, just stuff the retailer’s doing to get people through the door more so than to actually protect their health. Once people seem to be coming through the door more often, the precautions can be relaxed.

Which, again, is why this is a valuable exercise by Cuban. If you’re a business owner and you know there are undercover privatized health inspectors roaming the community to see who’s going the extra mile to keep consumers safe and who isn’t, you’re more likely to keep up with the safety recommendations.

By the way, he’s practicing what he preaches by prioritizing safety:

Mark Cuban told @bdameris and @MFollowill on their podcast that the inability to test for coronavirus is the reason the Mavs have no immediate plans to open their practice facility. pic.twitter.com/1w7l5TeUWj

In lieu of an exit question, read Erick Erickson on Shelley Luther, the business owner from Cuban’s hometown of Dallas who was ordered jailed for seven days for reopening early. His take is balanced and correct. Jail is too severe a penalty but some penalty was in order. Condoning lawbreaking by someone because they “need to take care of their family” would set a principle with a thousand bad outcomes.

Protester Charged With Assault In St. Louis. Are The McCloskeys Next?

Journo meltdown in progress over Peter Navarro's 'rogue' op-ed listing all the times Dr. Fauci has been wrong

“…had been experiencing fever and chills on Monday”

Living on Oak Street? Don’t get too comfortable

Next stop: the EU?

“The world will not allow Beijing to treat the South China Sea as its maritime empire.”

Not so fast on those reforms