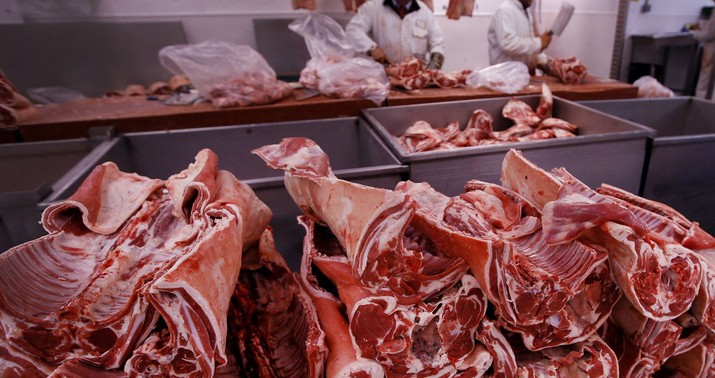 My first thought upon reading this was “Reopen how?” The problem with the now-infamous Smithfield plant in South Dakota, for instance, isn’t that they’ve been forced to close down due to aggressive stay-at-home orders by local government. The problem is that many, many workers are sick with COVID-19 — more than 700 at last check. Trump can reopen every plant in the country. Who’s going to staff them?

But there’s more to this than meets the eye. Workers and management at Tyson, the world’s second-largest meat processor, have been waging a PR war against each other in the media this past week. Five days ago CNN published a brutal report on Tyson’s plant in Waterloo, Iowa, where at least 182 cases of coronavirus are linked to the facility. Meatpacking is an excellent incubator for a virus because of how close employees are to each other on the production line. “I work about two feet from my coworkers,” said one Tyson worker. “I’m about an arm’s length away from my partner.” The company says it’s taken steps to improve hygiene, sanitizing the plant every day, instituting temperature checks on workers, and so forth, but some employees say it’s not nearly enough.

There are “2,700 employees, three shifts, and they only cleaned it once a day. This is after they knew that they already had positive tests coming out of that plant,” Thompson told CNN. “There was no enforcement of PPE, there was no requirement. In fact, some people we saw walking around actually had masks, but they were wearing them around their neck,” he said…

The employees said other crowded areas, such as the locker rooms and hallways, were not being modified in any way to promote social distancing.

“We’re all extremely congested, especially at the shift exchange in the locker room,” a third Tyson employee told CNN. She is a production line worker.

Yesterday it was management’s turn to fire back. John Tyson, the company chairman, bought a full-page ad in several major papers warning ominously that “The food supply chain is breaking.” You can read the full text here. Tyson does some PR by describing how the company is paying bonuses to frontline workers and taking steps to improve safety, like encouraging employees to stay home if they feel sick (which doesn’t solve the problem of asymptomatic carriers), but the thrust of his message is how much America stands to lose if Tyson and other meatpackers have to shut down. Not only will many thousands of animals need to be euthanized and their meat wasted if Tyson can’t process them, he warns, but millions of pounds of meat will disappear from the supply chain if plants are “forced to shutter our doors.”

Which is the key bit — “forced.” An important detail in CNN’s story about the Waterloo plant is that local officials and (of course) labor leaders fear for the safety of the workers there and are pushing for a shutdown: “Eighteen local and state elected officials, including mayors, state representatives and state senators, wrote a letter to Tyson Foods on Thursday asking it to voluntarily close down the plant.” Tyson management is clearly worried that that sentiment will spread and eventually pressure state officials into ordering a mandatory closure of the plant. In that context, the point of John Tyson’s paid ad yesterday is obvious: He wanted to apply counterpressure to federal officials, starting with Trump, by spooking the public about meat disappearing if the plant was allowed to close. He wants the feds to bigfoot Iowa’s state and local governments by ordering the plant to remain open no matter what.

President Donald Trump plans to order meat-processing plants to remain open, declaring them critical infrastructure as the nation confronts growing disruptions to the food supply from the coronavirus outbreak, a person familiar with the matter said…

Trump signaled the executive action at the White House on Tuesday, saying he planned to sign an order aimed at Tyson Foods Inc.’s liability, which had become “a road block” for the company. He didn’t elaborate.

The order, though, will not be limited to Tyson, the person said. It will affect many processing plants supplying beef, chicken, eggs and pork…

The White House has been discussing the order with meatpacking executives to determine what they need to operate safely and stay open, in order to prevent shortages, the person said. White House General Counsel Pat Cipollone worked with private companies to design a federal mandate to keep the plants open and to provide them additional virus testing capacity as well as protective gear.

They’re going to immunize meatpacking plants from lawsuits so that they can order their workers back on the line without fear of accountability, no matter how real and foreseeable the risk of mass infection is. Workers who are afraid can always refuse the order, of course — but there’s a catch: “Iowa Workforce Development said Monday that failing to return to work out of fear of catching the virus will be considered a voluntary quit, which disqualifies workers from receiving unemployment benefits.” Employees have lost their leverage because of Trump’s invocation of the DPA. Without that, they at least had a chance that local officials would close the plant down.

They can always strike, but this is a baaaaaad economy in which to risk one’s job. Instead I assume this battle will continue to be fought in the media. If the Waterloo plant does fall victim to a Smithfield-type catastrophe, with hundreds of workers getting sick after they’re called back on the job, it’ll be a PR disaster for Tyson. And maybe for the president, although Americans love meat enough — and are frightened enough by the whispers about a broken food supply — that they’ll probably forgive him anything in the name of keeping the hamburger conveyor belt moving.