Report: Stacey Abrams dialing up Dem leaders, asking them to push for her as vice president 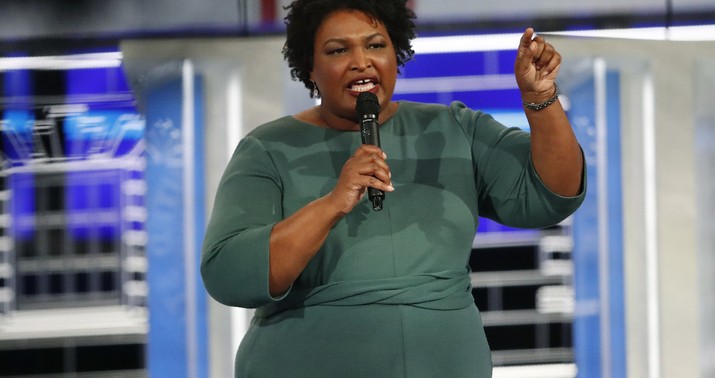 Embarrassing. Not the fact that she’s campaigning for the job; all politicians are ambitious, especially ones as young and well-known as Abrams. What’s embarrassing is that (a) she’s campaigning not just privately but publicly, via a media tour that’s brought her to “The View” and various print publications, and (b) she’s a longshot but her ubiquity gives the impression that she’s a short-lister, which means her campaign for the job seems destined to end with perceptions that she’s been “snubbed” by Biden when she’s not chosen.

Especially with Abrams herself nudging fans to feel aggrieved if a woman of color — hint, hint — isn’t chosen as his running mate.

It’s not just that she’s being unusually candid about her ambition, in other words. It’s that she risks doing actual damage to Biden and Democratic party unity by treating her VP chances as a sort of litmus test of racial progress even though she’s surely aware how unusual it would be for a politician who’s held neither federal nor statewide office to be chosen as vice president. Which is a special concern with Biden, of course, given the questions about his health. If the oldest and most rickety presidential nominee of my lifetime decides to ignore the unusual thinness of Abrams’s resume and make a pure identity-politics play on the ticket then he really does have the sort of brain damage Trumpers suspect him of having.

Stacey Abrams, a former Georgia lawmaker and unsuccessful candidate for governor, has been privately calling Democratic powerbrokers, asking them to tell Biden campaign officials that she should be vice president, according to multiple labor leaders familiar with the discussions…

But navigating the Biden campaign’s internal politics may be tricky for Abrams given Atlanta Mayor Keisha Lance Bottoms’ close relationships with Biden brass. Lance Bottoms has long been an Abrams rival, declining to endorse her in the 2018 gubernatorial primary and speaking positively about her opponent, Stacey Evans.

The case for Abrams rests on the idea that she’d generate unusual enthusiasm among the Democratic base if chosen. A poll conducted by the left-wing shop Data for Progress recently found that a Biden-Abrams ticket would perform better than four alternatives, especially with black voters and women of color. And despite what you may assume after Biden’s big win in the South Carolina primary, strong turnout for him from black voters this fall isn’t assured. A national poll from Suffolk released yesterday discovered Biden’s support among African-Americans *dropping* since December in a race with Trump and a third-party candidate, from around eight in 10 then to around two-thirds now. Quote: “[O]ne in four black voters now say they are undecided or would vote for a third-party candidate.” Abrams also has something that Kamala Harris, the more likely black woman VP pick, lacks — real progressive cred, the sort of thing that might bring some wary lefties out to the polls despite their misgivings about Biden. Put all of that together and you’re left with the sense that if she had won the Georgia governor’s race two years ago, she’d probably be the frontrunner.

But she didn’t win, no matter what Democrats will tell you. And it’s exceedingly hard for me to believe that swing voters are going to roll the dice on a possibly-truncated four years for Joe Biden when his vice president hasn’t run so much as a city.

Abrams may also be hurting her own standing within the party by trying to cut the line on VP, notes Josh Kraushaar. She’s already put her own interests above the Democratic Party’s interests once this year, declining to run in either of the two upcoming Senate races in Georgia despite her strong finish in the last gubernatorial election. She would have been the strongest candidate Democrats could field but I think she feared that losing two marquee races in two years might dim her political star permanently. So she passed instead of helping her party out, and now wants to be chosen ahead of more seasoned pols like Harris, Amy Klobuchar, and Elizabeth Warren despite the fact that she’s never done what they’ve done, win a statewide race. Kraushaar:

With a pandemic raging across the country, it’s difficult to imagine the former vice president picking a relative novice whose highest leadership position was wrangling the Democratic minority in her state’s lower legislative chamber…

[B]y transparently campaigning for a job she’s unlikely to win, Abrams is squandering some of the valuable goodwill she built up in the hard-fought 2018 governor’s race. Instead of building up political capital to prepare for a rematch, she spent the postelection period refusing to concede the election, writing an essay advocating “identity politics,” and resisting Democratic entreaties to seek a plum promotion. Even before this latest national media blitz, her popularity back home was already on the decline.

An Atlanta Journal-Constitution poll conducted last year showed just 45 percent of Georgia voters viewing Abrams favorably while another 45 percent viewed her unfavorably. Her net favorability was weaker than all the Georgia politicians tested, including Kemp and Sen. David Perdue. These aren’t the type of polling numbers that suggest she’s a political force back home.

Kraushaar speculates that Abrams’s public VP campaign may be little more than an attempt to stay relevant, knowing that she’s unlikely to be the choice. Maybe, but that wouldn’t explain why she’s reportedly campaigning privately too. And it wouldn’t explain her trying to box Biden in by hinting that she’ll be disappointed if a woman of color isn’t picked. This seems like an earnest attempt to lobby her way into being his running mate. I think Kraushaar may have identified the real reason she’s reaching for the brass ring, though: Maybe she’s worried that, despite Brian Kemp’s newfound political vulnerability after clashing with Trump, she’s not as much of a force in Georgia politics anymore as she was two years ago. The endless whiny “I won” complaints after her race against Kemp may have hurt her. If she loses another statewide race she won’t be on anyone’s list for anything. She needs to strike while the iron is still hot. Or warm-ish, at least.

If she wanted to be VP she should have run for president. If she had followed the Pete Buttigieg path and risen from semi-obscurity to a surprise win in Iowa or a series of strong showings in early states, she’d have hard evidence that there’s national enthusiasm for her. She wouldn’t be an unknown quantity to swing voters either; she’d emerge as VP nominee with hours of televised debates and campaign rallies under her belt, reassuring undecideds that Biden hadn’t chosen a newbie completely out of left field. But she didn’t want to run for president, probably because — again — she suspected she’d lose badly and that her weird quasi-superstar status within the party would fade. She clearly wants to be president. It just seems like she’s not eager to take the risk of actually having to win an election herself to get there.

In the end it may be Harris who ends up the big winner from the Abrams publicity tour. I don’t think Abrams will succeed in pressuring Biden to choose her but she may succeed in pressuring him to choose a black woman over Warren or Klobuchar, if only to deny Abrams the opportunity to imply that being passed over was racially tinged. No one will be excited for Harris but at least the proverbial box will have been checked.