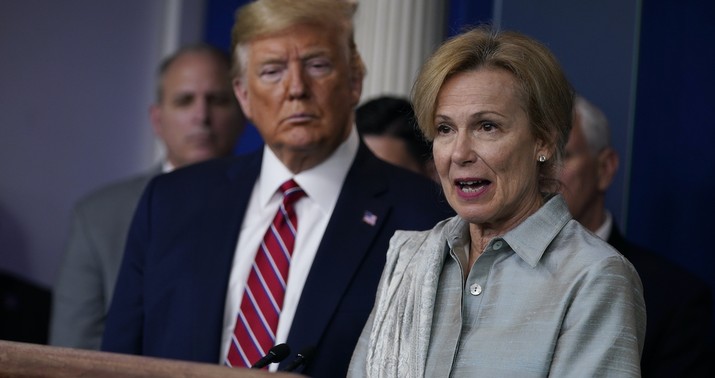 Some good news at last, although as I look at the model’s New York data I’m wondering if they’re being too conservative. There were 806 “official” COVID-19 deaths in New York in the 24 hours preceding last night. (On top of that, there are hundreds of people dying in their homes there every day who are uncounted in the official numbers unless they received a pre-mortem or postmortem positive test result.) The peak number of deaths expected in the new IHME model for New York is … 780.

Total deaths expected in the U.S. before August 4 now stand at 60,415. That number has routinely been at 80,000+ and jumped last week briefly to 90,000+ based on the latest data. The modelers must be optimistic about the progress of mitigation in areas outside New York.

In fact, the new U.S. death toll is so optimistic that it currently stands slightly below projected deaths in the UK, a country with one-fifth the size of the U.S. population. I’m guessing that projection will be dramatically lowered over time too. But if it isn’t, there are obvious possibilities for why the UK may be hit harder than us. One is more travel from continental Europe, where the pandemic is also raging. The other is the late start by Boris Johnson’s government in taking aggressive mitigation measures, switching from a Swedish laissez faire approach to an Italian lockdown strategy in mid-March. A former head of the CDC told the NYT that New York’s death toll might be *80 percent* lower today if Cuomo and de Blasio had started locking things down as little as two weeks sooner than they did. New York paid the price for their delay. Maybe Great Britain has as well.

Anyway, the new projections are encouraging. The raw numbers are depressing.

From April 2009 to April 2010, 12,459 people in the United States died from the H1N1 virus, according to the Centers for Disease Control and Prevention.

Coronavirus has now claimed the lives of more Americans than H1N1, Johns Hopkins University data shows. The first case of COVID-19 was confirmed in the U.S. Jan. 21 and the first death occurred Feb. 29…

There were around 60.8 million H1N1 cases in the United States, the CDC said. As of April 7, more than 386,000 people have had confirmed coronavirus cases since January in the U.S., according to Johns Hopkins.

A full year of swine flu didn’t kill as many people as five weeks of coronavirus did, even though official COVID infections account for just 0.6 percent of total swine flu infections. That’s a very deadly disease. It’s not “just the flu,” even a relatively dangerous flu like H1N1.

The latest form of denial is the idea that lots of people may be dying *with* coronavirus but not necessarily *of* coronavirus. If someone infected with the virus keels over and dies of a heart attack, that doesn’t mean the virus caused it. It just means that they had two illnesses, one serious and one possibly less so. Comorbidity is not causation! Right, but you’d need to be an outright truther to look at the spike in deaths in New York compared to historical data right now and deny causation:

Yesterday I linked to a story about EMTs explaining how coronavirus can trigger heart attacks: As the lungs fill up with fluid, the heart strains to circulate oxygen and gives out. Saying that a death like that wasn’t caused by COVID-19 is like saying that it wasn’t terrorist-piloted airplanes that knocked down the World Trade Center, it was a flaw in the buildings’ design that was exposed by the impact.

Even Tucker Carlson, a Fox host who’s otherwise taken the virus seriously, pointed last night to a strange decline in the CDC’s number of deaths by pneumonia lately and wondered if perhaps those deaths were being massively misdiagnosed as coronavirus deaths. Unlikely, countered WaPo’s Aaron Blake: The numbers Tucker was looking at were only through the week of March 21, a moment when the U.S. still had fewer than 400 official coronavirus fatalities. Pneumonia deaths may be in decline right now for the same reason that fever rates in Kinsa’s “health weather” map are in decline, because massive social distancing triggered by the coronavirus epidemic has led to less transmission of familiar infectious diseases like the flu. Or, more grimly, maybe some people who are susceptible to pneumonia due to an underlying health condition have come down with COVID-19 recently instead and died of that. That would reduce the number of “expected” pneumonia deaths year over year (as well as deaths from various other illnesses) even as the number of coronavirus deaths is ballooning.

I mean, we’ve known from the start that the virus hits the old and vulnerable hardest. Why should we be surprised, or treat it as evidence that disease is *less* deadly than we feared, to find deaths from other causes declining?

Here’s Deborah Birx yesterday explaining that the U.S. has taken a “liberal” approach to the issue of cause of death in cases where someone with a preexisting health problem who’s been infected by coronavirus has succumbed. We attribute that death to the virus whereas some European countries attribute it to the preexisting cause. And we’re correct to do so, for reasons of simple “but for” causation: But for the virus, what reason is there to believe New York would be experiencing a freakish surge in deaths right now? I’m sure there are cases in which someone with a very mild COVID-19 infection has died of a different disease and it might plausibly be argued that the virus didn’t contribute much to their deterioration, if anything. But those cases need to be balanced against the ones where people are pretty clearly dying of the virus but aren’t being counted because they were never tested. New York says it’s going to fix that problem, though, which is good news for giving us a better sense of the true death toll. But may not be good news for the next round of IHME projections.

Missouri: That Lake of the Ozarks party didn’t move the COVID-19 needle after all

” … no one will believe public health officials again”?

“…the reinforcement of progressive social-justice narratives should not get in the way of simple truth-telling.”

“The Senate doesn’t work. It doesn’t defuse the partisan tensions that are leading the country towards dissolution.”

“Used to be a stand-up guy”: Biden about to lose police support?

“…every state is vulnerable to this scheme and will be targeted if they have not been already.”

“Booing, changing the lyrics or disrespecting the song is now punishable with up to three years in prison…”

“What happened to you, Rudy?”: The sad Piers Morgan/Rudy Giuliani interview

“You sound completely barking mad, do you know that?”

“…a rushed editorial process led to the publication”