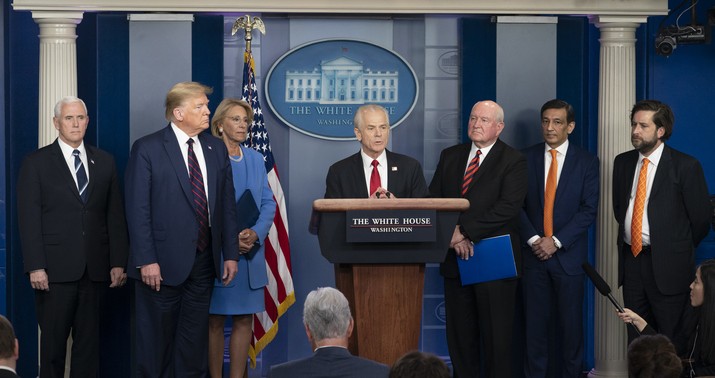 What a coincidence that these memos showing Navarro’s prescience about COVID-19 would mysteriously emerge a day after he was lambasted in the media for challenging Anthony Fauci over hydroxychloroquine.

We’ll likely never know which White House insider decided to share the evidence of Peter Navarro’s foresight with the press. But I have a hunch his name might rhyme with “Peter Navarro.”

The point of this leak, I take it, was to make Navarro look good at Fauci’s expense. Fauci’s been criticized by some Trumpers lately (unfairly) for having professed uncertainty about the risk to the United States in February. Navarro wants to show per his memos that he was more certain at the time and ended up being correct about the threat, in which case maybe it’s time to stop dunking on him over hydroxychloroquine and consider that he knows what he’s talking about. In reality, though, this leak hurts his boss more than it hurts Fauci. The inescapable question is why Trump didn’t take the crisis more seriously when even economic advisors like Navarro were flashing red alerts involving six-figure death tolls at him two months ago.

A top White House adviser starkly warned Trump administration officials in late January that the coronavirus crisis could cost the United States trillions of dollars and put millions of Americans at risk of illness or death.

The warning, written in a memo by Peter Navarro, President Trump’s trade adviser, is the highest-level alert known to have circulated inside the West Wing as the administration was taking its first substantive steps to confront a crisis that had already consumed China’s leaders and would go on to upend life in Europe and the United States…

Dated Jan. 29, it came during a period when Mr. Trump was playing down the risks to the United States, and he would later go on to say that no one could have predicted such a devastating outcome…

In one worst-case scenario cited in the memo, more than a half-million Americans could die.

That was the first memo Navarro sent. The second, per Axios, was sent on February 23 and projected 100 million Americans potentially infected and as many as one to two million dead. Both memos went to the National Security Council and were circulated “around the White House and multiple agencies,” with the Times claiming that a number of “top officials” plus aides to Mick Mulvaney received them. It’s unknown whether Trump himself did.

One of the lingering mysteries about why Trump was so sanguine about the threat from COVID-19 until mid-March is that a major pandemic originating from China, of all places, would seem to be right in his wheelhouse politically. He’s a nationalist and a China hawk (and a germaphobe!); if ever there were a crisis in which you’d expect him to overreact instead of underreact, it’s one in which Beijing covered up a deadly outbreak and exposed America’s dangerous overreliance on China for essentials like drugs and medical equipment. Instead he spent many weeks indulging in rosy chatter about the threat being contained while other hardcore nationalists and China hawks like Tucker Carlson, Steve Bannon, and Navarro himself were sounding the alarm. Although, ironically, in Navarro’s case that may explain why other White House officials *didn’t* take him seriously: Per Axios, they seemed to think it was another case of ol’ Pete needlessly freaking out about China again.

One senior administration official who received Navarro’s memos said at the time they were skeptical of his motives and thus his warnings: “The January travel memo struck me as an alarmist attempt to bring attention to Peter’s anti-China agenda while presenting an artificially limited range of policy options.”

“The supplemental memo lacked any basis for its projections, which led some staff to worry that it could needlessly rattle markets and may not direct funding where it was truly needed.”…

Former White House chief strategist Steve Bannon defended Navarro’s motives, calling the memos “prophetic” and saying Navarro was forced to put his concerns in writing because “there was total blockage to get these facts in front of the President of the United States.”

That’s a nice try by Bannon to exculpate Trump but Trump wasn’t prone to happy talk during February about driving the case count down to zero soon because some globalist evildoer inside the West Wing was hiding information from him. To all appearances that was a combination of him being terrified of spooking the Dow Jones average and being naturally prone as a master of hype to try to convince his audience that nothing truly bad could happen with him in charge. The Dow’s historic highs were one of his proudest “achievements” as president, something he noted regularly on Twitter and at rallies. It would have been alien to him to risk talking down the market and undermining his image as a strongman by admitting the growing likelihood of a major calamity at a moment when the extent of the threat was still somewhat speculative. A more hardcore nationalist would have gone the Navarro route and begun beating the drum early about China’s latest threat to the planet, but Trump is a Trumpist before he’s a nationalist. And so the message instead was “Can you believe how great we’re doing with me as president?” until the extent of the spread in the U.S. became impossible to deny.

I mean, here he is just yesterday being asked about a new report by the inspector general of HHS that there’s a severe shortage in needed medical gear for hospitals, from coronavirus tests to safety equipment. That’s no secret; doctors have been complaining about it for weeks. We’ve linked various stories about hospital workers having to sanitize N95 masks and reuse them because there aren’t enough to go around. In fact, Navarro warned in his February memo that the U.S. would need “at least a billion face masks, 200,000 Tyvek suits, and 11,000 ventilator circuits, and 25,000 PAPRs (powered air-purifying respirators).” But rather than just own up to it or say “we’re working on it,” Trump took to questioning whether the IG had a political motive:

Trump claims that a report from his own administration that hospitals don't have adequate testing and supplies is wrong, and then he accuses the HHS IG of being involved in a political plot against him. pic.twitter.com/iqQ7FbXTD8

If he had been asked about a shortage six weeks ago, he would have said the same thing. And not because of a “total blockage” in getting Navarro’s memos to him. He’s not going to acknowledge an unhappy reality until all other options have been exhausted.

Exit question: Does Navarro get credit from Trumpers for being prescient about the virus — or does he get knocked for having been “alarmist,” since it seems like the U.S. death toll may come in well under 543,000? (The IHME model predicts 80,000 or so during the first wave, before August 1.) On the one hand, he’s scored a point on Fauci by having sounded comparatively more dire about the threat in January. On the other hand, the more dire he expects the threat to continue to be, the more he’s destined to end up in the Fauci camp of not wanting to reopen the economy just yet because it’s not safe.