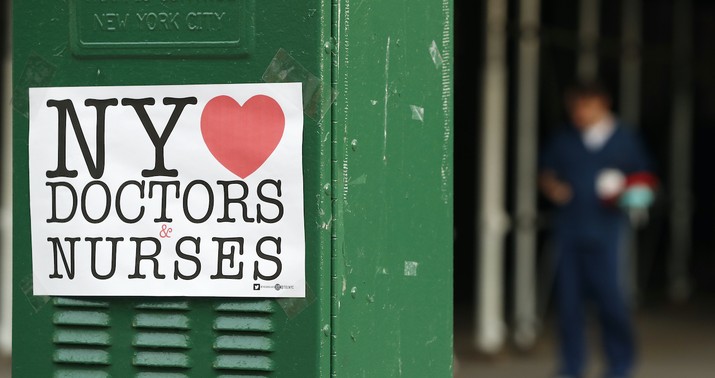 Yesterday I wrote about how the official daily coronavirus death count in New York State had plateaued at 600 or so even though the IHME model projected 700+, with deaths expected to approach 900 per day at the peak. What explains the difference? Were the assumptions behind the model, which were based on China’s dubious early data, simply too pessimistic? Had social distancing by New Yorkers been more effective than anticipated in flattening the curve? Could be both, of course.

There were reports last week that the official COVID-19 death toll in Italy and Spain didn’t fully account for the spike in deaths regionally in those countries between March 2019 and March 2020. There were “excess” deaths that were officially unexplained. The problem, it seemed, was that health authorities were too overwhelmed with caring for the living to take time to test all of the dead. If you came down with a fatal case of coronavirus and died at home, chances are your death wouldn’t count towards the disease’s death toll even though you’d be counted in the regional numbers for deaths by all causes during March.

It’s happening in New York too, says Gothamist in a new story this morning. If EMTs show up to an apartment where someone has passed away, the deceased will be classified as a “probable” case of COVID-19 if there’s evidence of a flu-like illness present — but probable cases don’t count towards the official coronavirus death toll. Unless the deceased was tested for the disease before expiring or is tested postmortem by the medical examiner, they’re left out. How many cases like that might there be in New York? A lot:

[A]nother 200 city residents are now dying at home each day, compared to 20 to 25 such deaths before the pandemic, said Aja Worthy-Davis, a spokeswoman for the medical examiner’s office. And an untold number of them are unconfirmed…

The FDNY says it responded to 2,192 cases of deaths at home between March 20th and April 5th, or about 130 a day, an almost 400 percent increase from the same time period last year. (In 2019, there were just 453 cardiac arrest calls where a patient died, according to the FDNY.)

That number has been steadily increasing since March 30th, with 241 New Yorkers dying at home Sunday — more than the number of confirmed COVID-19 deaths that occurred citywide that day. On Monday night, the city reported 266 new deaths, suggesting the possibility of a 40% undercount of coronavirus-related deaths.

Why are so many people dying at home? Some may have deteriorated from the disease suddenly; there are reports out there of doctors marveling at how quickly some patients go from more or less fine to critical. Others may suspect that they have a severe case of coronavirus but fear dying alone in a hospital ICU, isolated from family. Others, stricken with ailments unrelated to coronavirus like cardiac problems, may decide they’re better off toughing it out at home and hoping for the best than risking infection by visiting a hospital right now.

A cardiologist at Yale has a fascinating column today about a phenomenon that’s puzzling him and his colleagues: Hospital admissions due to heart attack and stroke are waaaaay down lately. Anecdotally, so are other emergencies unrelated to coronavirus, like appendicitis and gall bladder attacks. Where are all the sick people who aren’t sick with COVID-19?

Heart attack and stroke teams, always poised to rush in and save lives, are mostly idle. This is not just at my hospital. My fellow cardiologists have shared with me that their cardiology consultations have shrunk, except those related to Covid-19. In an informal Twitter poll by @angioplastyorg, an online community of cardiologists, almost half of the respondents reported that they are seeing a 40 percent to 60 percent reduction in admissions for heart attacks; about 20 percent reported more than a 60 percent reduction.

And this is not a phenomenon specific to the United States. Investigators from Spain reported a 40 percent reduction in emergency procedures for heart attacks during the last week of March compared with the period just before the pandemic hit.

It’s possible that America’s strange new reality of mass quarantine is reducing cases of acute illness, the doctor notes, such as by reducing the amount of physical exertion people endure every day. It could be that people are eating differently too. But he’s skeptical of those explanations, as am I. They shouldn’t make *that* much of a difference in the weird fall-off of hospitalizations for acute ailments. If anything, we might expect people to eat worse when they’re bored and cooped up. The stress from widespread anxiety over COVID-19 should also be hurting people’s health too. Weirdest of all, says the doctor, respiratory illnesses exacerbate heart conditions. With coronavirus circulating, you’d expect more heart attacks right now, not fewer.

Given the spike in deaths at home in New York and the reality of “excess deaths” in Italy and Spain, it seems likely that some not insignificant number of people are dying of conditions like cardiac trouble either because they refused to visit the hospital at a moment of mass infection or because EMTs couldn’t reach them in time to save them due to the much heavier load of 911 calls recently. (I haven’t seen data on growing lag times in response to 911 calls in NYC but I’d be keen to know.) If someone has a minor heart attack that would have been treatable during normal times and ends up dying on their bed because the ambulance took 90 minutes to arrive amid a surge of COVID cases, how should that death be classified? It’s not directly caused by the virus but the epidemic was a major contributing factor.

As I’m writing this post, Andrew Cuomo is rolling out today’s new official numbers from New York. On top of the many “coronavirus-related” deaths that are falling through the cracks, there’s bad news in the official count as well: No more plateau.

NEW: New York State recorded its deadliest day of the COVID-19 outbreak yesterday with 5,489 deaths up from 4,758, that’s an increase of 731 according to Gov. Andrew Cuomo.

This is the first day over day increase since April 3rd, Friday.

Good news about hospitalizations, but the death count is back in line with the IHME projections. Maybe New York hasn’t reached the peak yet after all.

Update: Oof. This is ominous.