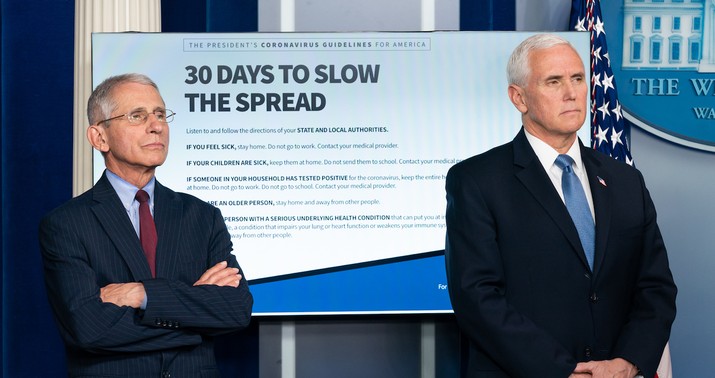 I’d been feeling mildly optimistic lately about the progress of the epidemic, but if this guy and his useless agency are feeling optimistic too then I’m firmly pessimistic again.

Weren’t Birx and Fauci complaining just a few days ago that Americans weren’t doing enough social distancing to avoid the grim scenario of 100,000-240,000 people dead, as the White House model projects? How did we get from that to the head of CDC going full wowzers about social distancing efforts in a radio interview in less than a week?

Why can’t these people ever seem to get their story straight?

The early predictions of the COVID-19’s expected death toll in the U.S. assumed about half of Americans “would pay attention to the recommendations,” CDC Director Robert Redfield said Monday in an interview with AM 1030 KVOI Radio in Tucson, Ariz.

“What we’re seeing is a large majority of the American public are taking the social distancing recommendations to heart,” he said. “And I think that’s the direct consequence of why you’re seeing the numbers are going to be much, much, much, much lower than would have been predicted by the models.”

CNN confirmed today that the famously opaque White House model does indeed assume that only 50 percent of Americans would heed the recommendations about social distancing. But … why the hell would they think that when 95 percent of the country is now under stay-at-home orders? Practically all nonessential businesses are closed. Where exactly are Americans supposed to congregate, even if they wanted to flout the social distancing guidelines?

A week after unveiling a stunning projection for the number of people who would die from coronavirus in the US — 100,000 to 240,000 — White House officials have yet to fully explain how they arrived at those numbers…

A key factor driving the large estimate was a crucial assumption, discussed internally by task force officials, that only 50% of Americans would observe the government’s stringent social distancing guidelines, the source said. That calculation was not shared widely. In reality, a much larger number — 90% — is observing the government’s guidelines, US Surgeon General Dr. Jerome Adams said in several interviews this week.

I’d like to hear him define “much, much, much, much lower” too. The White House model was influenced by the IHME model, but the IHME model projects more than 80,000 deaths in the next four months alone, close to the lower bound of the WH model. And, importantly, the IHME model assumes “full” social distancing not just throughout April but through the end of May. In fact, this explanation of their assumptions suggests that they’re imagining aggressive social distancing ongoing through June and July too. That is, their numbers are something of a best-case scenario in which everyone’s doing what the doctors say for months on end, which is unrealistic. So, by “much, much, much, much lower,” does Redfield mean 80,000 dead instead of, say, 120,000? Or is he imagining some new best-case scenario that’s not even on the public’s radar yet?

And if so, why did the models miss so badly? You could understand them being wildly off if some empirical data suddenly emerged that affected a key variable, like case fatality rate or rate of transmission. “People are really killing it on staying home” shouldn’t be one of those game-changing variables given the IHME’s belief that even top-notch social distancing means a death toll in the high five figures.

Increasingly I think we’re headed for a better-than-expected result in the near term, as the nationwide lockdown succeeds in flattening the curve, followed by a “What the hell, it’s coming back already?” reality check as cases surge quickly after people begin tentatively venturing back to work. Maybe that reality check will come because we rushed back towards normalcy before containment measures like contact tracing that are demanded by scientists are in place. Or, more ominously, maybe the reality check will come will even after those measures are in place; maybe containment will fail in this next round for the same reason that it failed in the first round, because the federal bureaucracy led by people like Redfield is incompetent in performing its function.

Then we’re going to have a moment of collective panic. What do we do? If the feds can’t get their act together on containment until September, say, do we go back to riding it out at home to buy them more time? Do we lock down cities but let lower-density areas take their chances? Do we go full Sweden in exasperation at ever containing this farking thing? What happens when that strategy blows up in our faces, just as many Swedish scientists are convinced the Swedish government’s strategy will blow up in theirs?