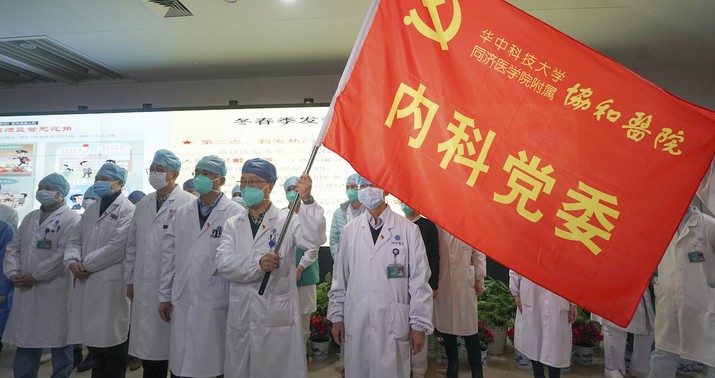 This is pure guesswork, not a leak of a secret official document or something similarly authoritative. They’re passing along informed Internet chatter about the number of urns that may be flowing into Wuhan right now, a topic about which I’ve written previously. Increased activity at crematoriums is a sure sign of local catastrophe, as New Yorkers are seeing firsthand now.

On the other hand, keep in mind that Wuhan is by no means the only area of China with deaths from coronavirus, just as NYC is by no means the only area of the United States with them. (NYC accounts for less than half of America’s death toll right now, in fact.) The salient fact in China’s lockdown of the city in late January was that it came too late; many residents, some infected, had already left for parts unknown. Just a few days ago, skyscrapers in faraway Shanghai were shuttered for nearly three weeks after having reopened in mid-March.

God only knows how many have died, and are still dying, of the virus in Chinese cities that aren’t being watched by outsiders as closely as Wuhan is.

Long lines have been forming at funeral homes in Wuhan over the past two weeks, as family members have been informed they may collect their loved ones’ remains ahead of Tomb-Sweeping Day. Some waited six hours to collect an urn, then the ashes.

Using photos posted online, social media sleuths have estimated that Wuhan funeral homes had returned 3,500 urns a day since March 23. That would imply a death toll in Wuhan of about 42,000 — or 16 times the official number. Another widely shared calculation, based on Wuhan’s 84 furnaces running nonstop and each cremation taking an hour, put the death toll at 46,800.

John noted the guesstimates circulating online yesterday too. I wonder what Beijing thinks of those numbers migrating from online speculation to the pages of the Washington Post.

An interesting detail in the Post’s story and this new one from the Times is that Chinese authorities seem nervous about “Tomb-Sweeping Day,” an upcoming annual holiday at which families traditionally visit the graves of ancestors to pay their respects. The government plans to hold a three-minute national moment of silence to honor those who died from COVID-19 but they’re discouraging mourners from congregating at cemeteries. Rituals have been banned; some people with reservations will be allowed into graveyards in cities like Beijing but the practice is strictly forbidden in Wuhan until May. Which could mean one of two things, not mutually exclusive. One: The virus is still circulating widely enough that the government fears a major new outbreak if people assemble. Two: Public discontent with how the original outbreak was handled is also circulating widely enough that the government fears a major outbreak of popular dissent if people assemble and begin sharing their grievances with each other. From the NYT:

As China tries to control the narrative, the police in Wuhan, where the pandemic began, have been dispatched to break up groups on WeChat, a popular messaging app, set up by the relatives of coronavirus victims. Government censors have scrubbed images circulating on social media showing relatives in the city lining up at funeral homes to collect ashes. Officials have assigned minders to relatives like Mr. Liu, to follow them as they pick burial plots, claim their loved ones’ remains and bury them, grieving family members say.

The ruling Communist Party says it is trying to prevent large gatherings from causing a new outbreak. But its tight controls appear to be part of a concerted attempt to avoid an outpouring of anguish and anger that could be a visceral reminder of its early missteps and efforts to conceal the outbreak. Those same public displays or discussions of loss could also feed skepticism over how China has counted the dead.

Liu’s father died of coronavirus in Wuhan. Chinese officials insisted on accompanying him to the burial, presumably to make sure he didn’t share his complaints about dignity and humanity with anyone there, in case they’re of a like mind.

Which many of them are, no doubt. Another Wuhan resident quoted in the Times piece “wants to know why it took officials weeks to inform the public that the virus could spread among humans.” Good question. Lots of New Yorkers want to know too.

I want to believe that we’ll eventually get the real death toll from Wuhan, that someone will leak, but then I remember that we still don’t know how many people were murdered at Tiananmen Square. When the Chinese government wants to keep a secret, it keeps a secret. On that note, via NPR, I’ll leave you with this (occasionally profane) video uploaded a few weeks ago by Detroit bus driver Jason Hargrove. Hargrove was annoyed that a passenger boarded his bus just as the COVID-19 epidemic was taking off in America and coughed four or five times without covering her mouth. People need to take this seriously, he pleaded. News came yesterday that he’s since died of coronavirus, one of thousands of American victims of China’s cover-up.