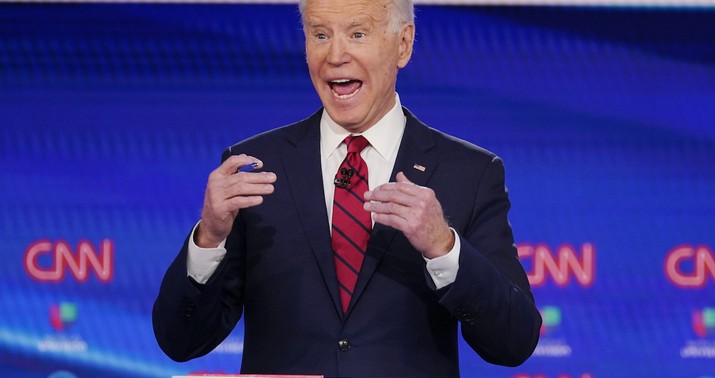 I support this idea, but only if they release the audio to the public. Imagine it. Kellyanne this morning:

“I think it’s really disappointing to have President Obama’s number two, who apparently doesn’t talk much to him, out there criticizing instead of saying, hey, here’s what we did that we thought was effective,” Conway said on “Fox & Friends.”

Team Biden called her bluff — via a leak to Trump’s favorite network: “Former Vice President Joe Biden is offering to call President Trump to discuss a strategy to combat the coronavirus pandemic rocking the nation, Fox News has learned.” His campaign put out this statement too:

Biden campaign confirms that he is willing to speak with President Trump directly about the coronavirus response, as reported by @FoxNews. Full statement here from @KBeds pic.twitter.com/ZWhYKmmvID

There’s no downside to that offer for Biden. If Trump accepts, it’s an easy way for Biden to elbow in on all the coronavirus coverage. He’s been sidelined by his inability to hold rallies and the momentary freeze in Democratic primaries. He’s desperate for a way to reassert himself as a national figure at a moment of national crisis. Conway handed him an opportunity.

If Trump doesn’t accept — and he won’t — then Biden gets to accuse him of being petty. “You wanted to put aside politics and confer on COVID-19. I was willing for the good of the country. You weren’t. It speaks volumes.”

Trump will be asked about it at today’s coronavirus briefing and will probably say that there’s no point in conversing with someone who has a brain disease.

We haven’t written much about 2020 polling lately and this seems like a fine place for it. Turns out it’s a mixed bag for Trump right now, which makes sense given the extraordinarily weird politics of the moment. On the one hand, voters are rallying around their political leaders; on the other hand, the papers are full of stories about how the feds didn’t act aggressively to slow the spread of the virus. That’s produced some contradictory data. For instance, Morning Consult finds 47 percent think the administration isn’t doing enough versus 40 percent who think it is; Trump’s approval on handling the crisis is down seven net points since March 20 as well. Look at the RCP poll average, though, and you’ll find that he’s reached another personal best in overall job approval at 47.6 percent. He trails Biden head to head in all recent national polls (and in the latest poll of Wisconsin too) but the range varies widely. Fox News and Harvard-Harris found him down 9-10 points this past week but ABC/WaPo and Grinnell/Selzer put the margin between 2-4.

A new one from Reuters has the lead between those two poles: Biden 46, Trump 40.

Maybe being sidelined is helping Biden right now. The conventional wisdom is that it’s hurting him because it’s giving Trump an opportunity to lead through a major crisis with the national stage to himself. Team Joe seems to share that belief per their interest today in muscling in on the news cycle by speaking to Trump or someone else at the White House. But Biden’s numbers don’t seem to be suffering despite the modest growth in Trump’s job approval. As I say, he still leads in all head-to-head polling. Opinions about the president may be too fixed among voters to move the needle much even at a moment when he’s displaying crisis leadership. The best thing Biden could do under the circumstances might be to continue to lie low and avoid scenarios that might lead voters to question his competence. The more the election is a pure referendum on Trump, the better his chances are. Even at a moment like this.