Dem party leaders: Yeah, it’s hard to see how we’ll be able to hold a convention this year 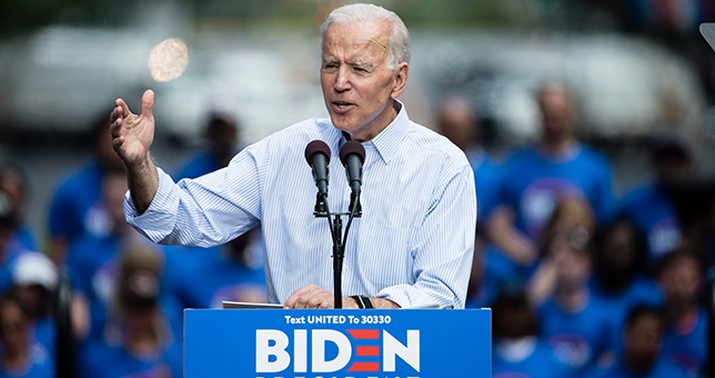 Ed noted this morning that this is Joe Biden’s feeling too. How could anyone feel otherwise? Imagine the public health — and political — catastrophe if Democrats plowed headlong into holding the convention in mid-July as scheduled and seeded a new outbreak just as the country is hoping/expecting to enter a summer lull.

Party leaders are considering the alternatives. Postpone the convention until August? Hold a “virtual convention” somehow? Hold an in-person event but scale it way down?

All of those ideas have problems.

“It’s more likely that it gets canceled than it happening. That’s 100% true,” said Alexis Wiley, a DNC superdelegate from Michigan…

Leah Daughtry, the former CEO of the 2008 and 2016 Democratic conventions, said if she were on the job again this year, “I’d be thinking about how to do a virtual convention, because you just have to — you have to consider all the options at this moment.”…

“There’s going to be a lot of companies [in Milwaukee] — restaurants, bars, you name it — who aren’t going to survive this…That convention can be a way to not just jumpstart them, but bring them back to life,” said Khary Penebaker, a DNC member from Wisconsin…

One other option being mulled by the rank-and-file: Reschedule the convention date – something that could be tricky given that the Fiserv Forum is also home to the NBA’s Milwaukee Bucks, which could be in the throes of the playoffs this summer if the league opts to reschedule most of the season.

A poll of Wisconsin published today found 62 percent surveyed thought the convention shouldn’t be held as an in-person event, notwithstanding the hundreds of millions of dollars in lost revenue to Milwaukee that that would mean. That’s how frightened people are of COVID-19.

Scaling the event down wouldn’t work well. For starters, how far down should they scale? “Only delegates allowed” is a fine idea until you remember that there are more than 4,600 delegates, including super delegates. That’s more than the number of sailors on the U.S.S. Theodore Roosevelt, which is being mostly evacuated because the fear of rapid contagion is so great. Granted, the delegates wouldn’t be in quarters as cramped as the sailors are, but they’re also much older and in worse physical shape than the average sailor is. A COVID-19 outbreak among the delegates would be a deadly threat, not to mention a PR disaster.

Because there are so many of them, there’s no feasible solution involving testing. Even if those five-minute diagnostic tests that Abbott is rolling out could be used, you’d need a ton of them on-site to process the delegates in a timely way every day. A small group could be tested once and then quarantined together until the convention is over, but not 4,600 people. A more manageable alternative would be to scale the attendees waaaaaay down and have only, say, two or three members of each state delegation attend so that they can formally announce the numbers on Biden’s when the floor vote finally begins. But that risks draining the vitality out of the event. It’d be preposterous to have a group of a few hundred people in a convention hall trying to generate excitement.

How about a “virtual” convention? You could have a live broadcast of various speakers delivering addresses remotely, I guess. You could certainly do the floor vote remotely. But again, all life would be drained from the oratory without an audience cheering. Consider how flat the rebuttal to the State of the Union address feels each year compared to the president receiving raucous applause from members of his party during his speech to Congress. Politicians need a live audience. Maybe COVID-19 will be sufficiently contained by July that speakers can address small groups of 100 people or so in their home cities and those addresses can be carried live sequentially to a national audience. Gotta have some sort of noise to rally voters.

Alternately, if scheduling conflicts don’t prevent it, they could move the convention to August. That’s the same month the GOP convention will be held. Democrats scheduled their pageant for earlier in the summer in order to avoid a conflict with the Olympics but the Olympics have now been postponed themselves. If nothing else, moving the convention to August would stop Republicans from criticizing them for following through with their event before it was safe to gather publicly again. The wrinkle is that it’s hard to imagine experts like Fauci and Birx condoning any truly mass gathering for the rest of the year. Even if we catch a break over the summer and COVID-19 cases fall off dramatically, fall will be right around the corner by the time the August conventions are held. Average Americans will doubtless still be under strict orders to avoid big crowds in the name of preventing new outbreaks. Politically, it’ll look terrible for Democrats or Republicans to ignore that advice for their own selfish interest in pageantry.

Here’s something that jumped out at me today about what happens if we ease off of social distancing too soon:

By contrast, Trump’s presidential guidelines only apply through May 1. The president has indicated that he may extend that date as the situation warrants.

But at the briefing Tuesday, officials did not specify how long their modeling assumes social distancing measures would remain in place. Chris Murray, IHME’s director, says the modeling team is working on a projection for exactly “what sort of rebound we will see,” if social distancing was eased after May 1 instead of June 1. But he says there’s no question it would be significant.

There’s a big difference between easing up on May 1, when the epidemic will be raging everywhere, and easing up in August, when the IHME is currently projecting zero deaths. If Americans really do turn the corner on the virus in June and begin to reestablish a degree of normalcy, attitudes towards holding some sort of in-person convention are destined to change. People will be itching to enjoy public celebrations and spectacles again, especially if it’s too late for sports to return this summer. Trump will strain as hard as he can to have the convention proceed normally, as scheduled, and if Republicans insist on doing that, Democrats will insist on doing the same to keep pace. Maybe after months of misery people will embrace the idea of a couple of big parties, a last hurrah before we hunker down for a resurgence in the fall.

But that’s the best-case scenario. It assumes that we, and Trump, continue to absorb the economic shocks of sustained lockdowns for the next month or two to put a real dent into the virus’s spread; it assumes that the sort of public health advances we need to contain the virus going forward, like mass testing and contact tracing, happen soon; it assumes that the virus really does recede during warmer weather. If anything goes wrong that raises the risk to people from a second outbreak, it’ll be much harder politically to justify the risk posed by conventions in August. Both parties will be at the mercy of events until relatively soon before the conventions are scheduled to happen. Planning for a scaled-down or virtual event is the prudent thing to do.

In lieu of an exit question, here’s Whoopi Goldberg asking a guy who’s not going to be the Democratic nominee why he’s still in the race.