Trump to governors: We’ll base our guidelines on whether you can reopen for business on testing and surveillance capabilities 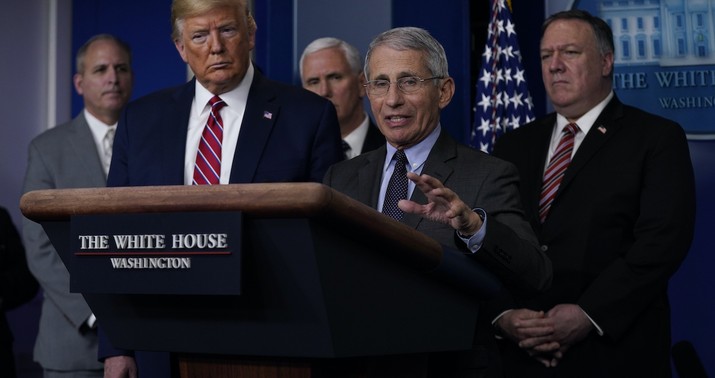 This is just what Fauci and other epidemiologists want. It’d be silly and unsafe for everyone to lock down, only to then reopen on an arbitrary date before there’s any system in place to limit new infections. The point of our national experiment in self-isolation is to slow down the spread of the disease and to buy time for the feds and the private sector to get where they need to be on testing. When we reemerge, testing needs to be fast and easy so that anyone experiencing symptoms can get checked out immediately and quarantine themselves if they’re positive. And, ideally, there’ll be some method to notify people with whom they’ve been in contact that they’ve been exposed and also need to start isolating themselves. That’s what South Korea does, and it’s why their society continues to function while holding down the number of new cases.

But that’s not what Trump’s been saying, until now. He doesn’t want the lockdowns to go on indefinitely, until we’re “ready.” He wants a deadline of some sort for certain parts of the country to reopen. Whether that’s next week, Easter, the week after Easter, what have you, it has to be sometime soon-ish.

Either he’s come off that position, which is unlikely given how much he’s pushed it the last few days, or his science people convinced him to put this letter out and he’ll soon start undermining it by tweeting about a deadline again. The key bit:

That seems prudent. But there are wrinkles:

To categorize counties as high-, medium- and low-risk, you need an adequate amount of testing everywhere. The US testing situation has improved, but it very much varies from location to location. https://t.co/o3ML0ATW4n

A 3-week national lockdown to (i) contain discovered *and undiscovered* simmering hotspots and (ii) get testing volume up to speed everywhere … and *then* applying recommendations on a county-by-county basis *after* those 3 weeks… that would be a much better policy.

To return to this post, the great unknown in America’s battle against COVID-19 is just how many infections there are. 200,000? 20 million? Antibody testing would tell us. But regular ol’ diagnostic testing, if it’s easily accessible, would give us a clue where the new outbreaks are so we can focus on containment there. Unless there’s a reason to think diagnostic testing will be reliably available more or less everywhere in the next few weeks, which is doubtful, I don’t know what we’re doing talking about Easter or rating different areas high-risk or low-risk. We know New York is very high risk. We have a good sense that New Orleans and Atlanta and various cities in Florida are higher risk. We’re flying blind most everywhere else.

Which means, effectively, the whole country is high-risk now and will remain that way until testing capacity improves.

_
US: Very bad news, and a very bad trajectory on #COVID19 https://t.co/I3PqgDHa5W pic.twitter.com/9HSVepRLd6

If Trump wants everyone open for business ASAP, he should devote whatever time he’s not spending on getting ventilators and PPEs to facilitating testing. Until we’re up to speed on that, people like Fauci will resist his demands for an economic restart.

The letter makes it sound like Trump is easing off the pressure to do that soon. No restart until we can monitor infections better. But his conference call with governors this afternoon cut the other way:

On a conference call with governors Thursday, Trump stressed the need to reopen businesses and to recognize regional differences in the virus’ impact.

“We all have to get smart,” Trump said on the call, audio of which was obtained by The Associated Press. “We have to open up our country, I’m sorry.”

Mississippi Republican Gov. Tate Reeves, who has not ordered business closures or limits on social behavior, thanked Trump for recognizing that the virus has affected states differently and “one size does not fit all.”

“I appreciate you realizing that,” Reeves said.

The ass-kissing by Reeves is a nice touch. I wrote about him this morning. He just overrode a series of local lockdowns in his state by reopening offices, factories, and lots of other businesses even though he shares a border with the state that looks set to experience the next mega-outbreak, Louisiana. A major outbreak could be seeded in Mississippi by cross-border traffic with Louisiana, assuming it hasn’t happened already, and the dearth of testing would mean Reeves and the CDC would have little idea until it was too late to tamp it down. Mississippi isn’t a “low-risk” state. It’s terrifying that Reeves either doesn’t understand that or is willing to accept an outbreak in some insane dead-ender bid to prove his MAGA bravado.

Trump isn’t the first president to sleep on a developing crisis and he won’t be the last, even if this crisis happens to be an unusually grave one. What’s amazing about it is how widespread the administration’s failures are, structurally and in terms of basic competence. There’s the CDC testing fiasco, of course, and the FDA’s inability to quickly find a back-up plan. But there’s also Trump and members of Congress not taking their intelligence briefings on the risk of COVID-19 turning into a pandemic seriously enough. There’s the fact that some key agencies are understaffed because the president prefers acting officers, some of whom get promoted up the ranks to fill sudden vacancies even though they may not be ready. There’s a report out today that his administration inherited a “playbook” from the National Security Council in 2017 on the steps needed to contain an outbreak — and didn’t use it. They’ve invoked the Defense Production Act but haven’t used that aggressively either to order medical supplies even though manufacturers want to be sure before making new products that the feds will buy up their inventory.

Coronavirus isn’t a “black swan,” says Jonathan Last. We’ve known a pandemic would come sooner or later. Trump and his team are the black swan because of how slowly they moved to prepare for the arrival of the virus and how badly they botched it once they did move, with the president repeatedly assuring people the matter was in hand until about two weeks ago. The least he and they could do now is try to mitigate the damage by being prudent about when it’s safe to ask people to go back. The letter is a good step if he intends to stick with it. Judging by the conference call, I’m not sure he will.