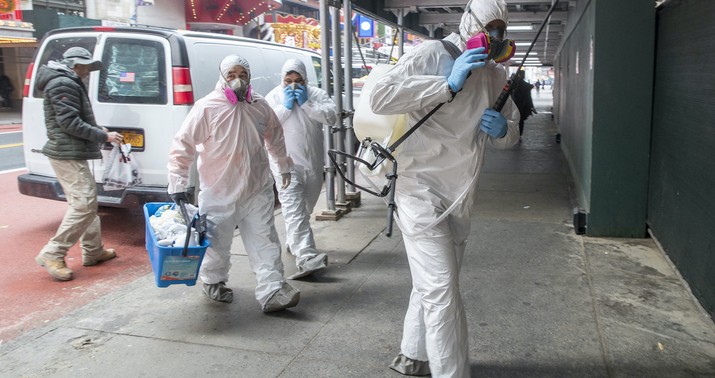 One of the two is Jeff Colyer, the former governor of Kansas.

Even so, I’m torn on whether this piece is worth promoting. The argument made by Colyer and his co-author, Daniel Hinthorn, is interesting. Don’t focus on using hydroxychloroquine as a last-ditch remedy for coronavirus patients who are at death’s door, they say. Consider it as a prophylaxis for health-care workers and others who are likely to be exposed to the virus. They point to that recent French study that was touted on Tucker Carlson’s show as evidence that patients given HCL and an antibiotic, azithromycin, had “cleared” the virus from their systems within three to six days. If the same effect can be achieved in health-care workers, not only can they stay on the job without fear of severe illness but the risk that they’ll transmit the virus to patients will be much reduced.

Just one wrinkle: There’s no data whatsoever in this op-ed. No hard evidence that hydroxychloroquine and azithromycin are actually reducing the viral loads in patients. The furthest Colyer and Hinthorn will go in defense of the treatment is to say “Our patients appear to be showing fewer symptoms,” whatever that means.

We had been using the protocol outlined in the research from China, but we’ve switched to the combination prescribed in the French study. Our patients appear to be showing fewer symptoms…

As a matter of clinical practice, hydroxychloroquine should be given early to patients who test positive, and perhaps if Covid-19 is presumed—in the case of ill household contacts, for instance. It may be especially useful to treat mild cases and young patients, which would significantly decrease viral transmission and, as they say, “flatten the curve.”

Emergency rooms run the risk of one patient exposing a dozen nurses and doctors. Instead of exposed health workers getting placed on 14-day quarantine, they could receive hydroxychloroquine for five days, then test for the virus. That would allow health-care workers to return to work sooner if they test negative.

I don’t know what we’re supposed to do with “Our patients appear to be showing fewer symptoms.” On the other hand, the Indian Council for Medical Research also recently recommended hydroxychloroquine as a prophylaxis:

It’s not clear what data they’re basing that on. Presumably it’s the same French study that’s gotten so much buzz lately online.

Can we trust that study, though? Read this analysis before you answer. Some of the scientific details are above my pay grade but the basic criticism is clear enough. Six patients who were given hydroxychloroquine were “lost in follow-up,” in some cases because they had to go the ICU. One died. Meanwhile, only some of the “control” patients had their viral loads measured, which means it’s unclear how sick they were compared to the patients who got HCL. Only six patients, all of whom recovered, got azithromycin and it’s not specified how the decision to give them that drug was made. The author’s conclusion: “This paper almost certainly would have failed peer review, given that it is not randomized, doesn’t do a proper intention-to-treat analysis, and has a whole lot of missing datapoints among the control subjects.”

Should we set a national protocol on using hydroxychloroquine in tandem with azithromycin based on evidence as flimsy as that? Hospitals could certainly try giving it to doctors and nurses as a desperate measure to try to keep them from getting infected. But what are the odds that any hospital will have a surplus of the medication given the shortages that we’ve seen since chloroquine mania broke out among the public? They may want to preserve the supplies they have for critical cases, in hopes that the drugs can save their lives. A doctor writing at Slate offers two more reasons not to condone widespread prophylactic use of HCL just yet:

The first is what we just discussed—for people who have a very good chance of recovery without the drug, we have to balance potential risks against potential benefits. When people are likely to recover, we don’t want to take too many risks.

Second, given the high recovery rate, it will be very difficult to know whether the drug actually works or whether most people are just getting better, without a comparison group. Suppose the recovery rate of hospitalized patients with COVID-19 is 80 percent (it may well be higher or even a little bit lower, data coming from different hospitals is varied). Suppose we treat the next 100 such patients with a new drug, and 90 percent recover. Can we conclude that the new drug is saving some patients? We can’t—the better survival could be due to the fact that the patients we treated were identified earlier in their disease course, or that they had fewer underlying medical conditions, or that they were younger, or it could just be random chance. In order to have any confidence about the effects of the drug, we need to compare outcomes in people who did and did not get the drug, and who were treated at the same time, with the same background care. The optimal way to do that is in a randomized clinical trial, a number of which are currently ongoing and may actually yield reliable information quite soon.

There’s already some pushback in India on the first grounds. “The adverse effects of this drug are life-threatening if taken without guidance. Right now, there is mass fear against COVID-19; people believe it will kill them. Suddenly, if you announce a drug for prevention, and it is available readily, people will think let me also try it,” said one Indian cardiologist. Last night brought news of an especially tragic/stupid example of a frightened couple dosing themselves with chloroquine phosphate — a chemical used to clean aquariums — in hopes of warding off the disease. The man who took it died while his wife ended up in critical condition.

Those clinical trials are coming. We’ll hopefully know more in a month. At the very least, we’ll have some sense from the proving ground in NYC hospitals whether hydroxychloroquine *appears* to be preventing/eliminating infections or whether it’s a dud. If it does work, hopefully it’ll be widely available quickly.

The provision in Senate and House bill that Vice President discusses (championed by Senator Daines and others) would enable the large scale manufacturing of promising drugs so that if one is proven safe and effective, you could enable wide scale access to patients right away. pic.twitter.com/EuXxqz7QUw