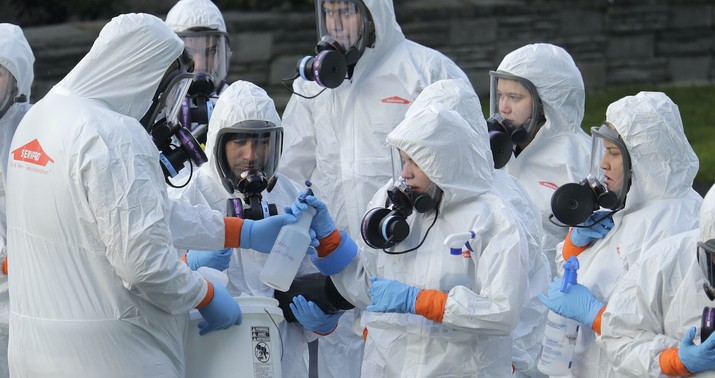 Readers with science backgrounds: Is it safe to assume from this news that people who’ve already contracted COVID-19 will be strongly immune to it going forward?

I ask because the story discusses the immunity we should expect from a potential vaccine, not the immunity one might gain from getting sick and then recovering. But it seems logical to me that it would work the same way, since in both cases your immune system is being triggered to flood your body with antibodies.

It’s an important question because a lot lot lot lot lot of people are going to get this disease before a vaccine is available next year. If the virus isn’t splitting off into new strains by mutating much, and if the immunity acquired by infection is durable, then many millions will be able to reenter the work force promptly after recovery with confidence that it’s “one and done” when it comes to getting sick with this thing. Either it’ll kill you or you’ll never have to worry about it again. In fact, as the CDC develops serological tests to show who’s had the disease — maybe without even knowing it — and who hasn’t, presumably the assurance of immunity could send lots of people back into the labor force even in cities where outbreaks are ongoing.

Anyway, good news for once:

There are only about four to 10 genetic differences between the strains that have infected people in the U.S. and the original virus that spread in Wuhan, he said.

“That’s a relatively small number of mutations for having passed through a large number of people,” Thielen said. “At this point the mutation rate of the virus would suggest that the vaccine developed for SARS-CoV-2 would be a single vaccine, rather than a new vaccine every year like the flu vaccine.”

It would be more like the measles or chickenpox vaccines, he said — something that would likely confer immunity for a long time.

“I would expect a vaccine for coronavirus would have a similar profile to those vaccines. It’s great news,” Thielen said.

A virologist explained to WaPo why the flu is different. If two flu strains enter the same cell, they can exchange segments of their genome to form a third, new strain. A flu shot that’s effective against the original two strains might be less effective against the third one. Coronavirus strains don’t appear to be aggressively forming hybrids that way. Essentially there’s one main strain with minor variations. Find a vaccine that nukes that and you’ve nuked the virus altogether.

The most promising candidate for a vaccine in the U.S. is being developed by Moderna Therapeutics. They’re able to move rapidly because they use an innovative technique:

[I]f the vaccine proves not just safe, but also successful, the company is preparing for an anticipated “incredible demand to scale up the vaccine very, very quickly,” Hoge says, “we have already started to do work to scale up to producing millions of doses.”

That’s made possible, in part, by the non-traditional technology used to make this particular vaccine. Moderna uses mRNA, a genetic form of the virus’ genome, in its vaccine. When it’s injected into people, cells then process it so immune cells can recognize it and target it for destruction. Unlike the processes used to make most traditional vaccines, this method does not require growing huge amounts of the virus, which is time-consuming.

Scientists who’ve analyzed Moderna’s vaccine say that the risk that it’ll cause “immune enhancement,” a side effect in which it makes an infected vaccinated person sicker, is low. Reading that, though, you can understand why researchers would want to take their time with development even in the middle of a global crisis. Imagine millions of people being given a shot that inadvertently made COVID-19 *more* severe for them. The timetable for mass dosing remains a year away, but depending on how grave the crisis gets, Moderna might start administering the vaccine to health-care workers this fall. Imagine the public clamor for the drug if doctors and nurses who are part of that trial report that it’s successful in creating immunity for them.

Moderna’s not the only game in town, though. There’s a global competition to be the first nation to land on the COVID-19 moon by developing a vaccine and of course the Chinese intend to win it, not only for reasons of prestige but because they can use access to the vaccine as leverage over smaller countries who might otherwise look to the U.S. for help. I’m not sure what would happen in the U.S. if Beijing announced this fall that they’ve developed a cure and are prepared to begin dosing it out to their people. Would Americans trust China enough to clamor for it? Would they have a choice if FDA regs meant the U.S. alternative was still many months away, with untold numbers destined to get sick without the shot?

Even if health-care workers can’t get Moderna’s vaccine early, there may be other emergency measures available to help protect them from the virus. In lieu of an exit question, read this interesting argument for dosing them up with the Bacillus Calmette-Guérin vaccine. That’s a tuberculosis vaccine but studies have shown it might reduce the risk of respiratory infections in adults by 70-80 percent. A WHO study published a few years ago found that it “had beneficial off-target effects and recommended further research.” It won’t prevent recipients from contracting COVID-19 like a true coronavirus vaccine would, perhaps, but it could conceivably turn a potentially severe case into a milder one.

Texas Supreme Court: Lack of immunity to COVID-19 not a disability

Not a reason for mail-in voting

Who could have seen this coming?