Ted Cruz to Trump: Use the Defense Production Act to force companies to make ventilators 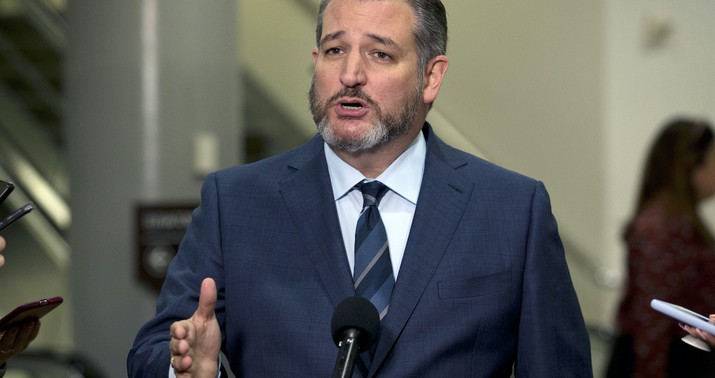 I understand the argument for doing this. But I didn’t think a politician so closely associated with smaller government would lead the charge to impose a wartime command economy.

At least on the narrow issue of manufacturing ventilators.

For me it’s a question of efficiency. Will we get more ventilators more quickly with the federal leviathan giving orders to the private sector? What have you seen from the federal government lately, starting with the FDA, that makes you believe they can move more nimbly to head off a crisis than private interests can?

Cruz — who has emerged as one of the most vocal members of Congress on the dangers the virus poses — wants the administration to tell private manufacturers to begin making ventilators, warning the nation could soon face a shortage…

“Everyone recognizes this is a public health threat,” Cruz said on his podcast. “We need to do everything on the front end to make sure we’re not forced into an impossible situation on the back end.”

Cruz on Friday wrote to U.S. Department of Health and Human Services Secretary Alex Azar, urging him to “use the significant powers of the Defense Production Act,” a law stemming from the Korean War that allows the federal government to impose some control over private industry to make material deemed necessary for national defense.

In theory, with effective leadership, production of necessary equipment might be more efficient under emergency circumstances if it’s directed by a central authority. (See, e.g., China building hospitals almost literally overnight to house coronavirus patients.) If the White House were a highly functioning nerve center that knew exactly how many ventilators and masks were needed in various hospitals and knew exactly which companies had the capacity to begin manufacturing and distributing those masks and ventilators most quickly, it could streamline supply and demand.

But what if the White House is actually a big glutinous mass in which the left hand doesn’t always know what the right hand is doing? Various companies seem perfectly willing to help out on manufacturing medical equipment. They just can’t get a clear message from Trump’s administration on what’s needed, or so they claim:

In interviews with participants in the process, from business executives to government officials, there is still widespread confusion about how much and what exactly each firm is supposed to produce. Corporate executives say they face a bewildering number of requests from dozens of nations around the world, along with governors and mayors around the country, for scarce supplies. The White House has not said who will set the priority list for deliveries. And it is not clear that any of it will arrive in time for the cities and the states that are hit the hardest, including New York.

Yet, in declining to actually make use of the Korean War-era production act that he invoked last week, Mr. Trump is also avoiding taking personal responsibility for how fast the acute shortages of personal protective gear and lifesaving equipment are addressed…

Industry executives say companies are reluctant to crank up production lines without purchasing guarantees from the government. With the economy in free-fall and factories shuttering around the country, few manufacturers are eager to invest in new machinery or venture into new products.

Remember that Jared Kushner is running a “shadow task force” alongside Mike Pence’s. Remember too that when governors pressed Trump recently on purchasing ventilators, he encouraged them to purchase their own and promised that the feds would back them up. That’s a lot of potential confusion on who’s in charge of what and who’s responsible for making things happen. The Times claims that Kushner and other aides have pushed to put FEMA in charge of all this, but FEMA “likely won’t know a thing about medical supply chains and devices,” per one expert. The head of FEMA didn’t sound like he wanted or needed to invoke the Defense Production Act to make things run more smoothly when asked yesterday:

TAPPER: “Has [Trump]… ordered any companies to make more of any of these critical supplies?”

If it’s true that companies aren’t turning down requests to help then arguably there’s no reason to order them to do so. But the issue raised in the excerpt is a real one. Before a firm revamps its production line to start cranking out a brand new product, it needs to know that its expenses — including the expense of extra hires and overtime — will be covered. Without a federal guarantee, it doesn’t. So there’s the argument for the Defense Production Act: Uncle Sam will promise to buy up your new inventory even if some of it turns out not to be needed. (Er, under what circumstances would any country in the world decline to purchase available inventory of masks or ventilators right now, especially knowing that a “second wave” of coronavirus is coming this fall?)

One reason why invoking the DPA might appeal politically to Cruz is because business interests like the U.S. Chamber of Commerce are reportedly lobbying Trump not to invoke it and burden American companies with new regulations. Righty populists have grumbled for ages about the Chamber putting business ahead of the country, most notably on the issue of immigration. Lefty populists have their grievances with the Chamber too. Go figure that Elizabeth Warren also wants Trump to invoke the DPA and force companies to start production:

United States Senators Elizabeth Warren (D-Mass.), Edward J. Markey (D-Mass.), Brian Schatz (D-Hawai’i), Chris Murphy (D-Conn.), Tammy Baldwin (D-Wis.), and Sheldon Whitehouse (D-R.I.) sent a letter to the Chamber of Commerce demanding answers as to why the organization is lobbying against President Trump’s use of the Defense Production Act — an extraordinarily powerful tool that would allow him to quickly harness and use America’s technological and manufacturing might to address this public health crisis and provide needed equipment for hospitals, health care providers, and first responders. Their letter asks the Chamber to cease their lobbying efforts against measures to address the COVID-19 pandemic and place the economic and public health needs of hundreds of millions of American families above its members…

“This report, if true, is shameful, revealing that the Chamber is actively working against efforts to address the urgent national COVID-19 pandemic, and is placing the short-term desires of its members above the economic and public health needs of hundreds of millions of American families,” the lawmakers wrote. “You owe the public an explanation for this behavior. We urge you to cease your lobbying efforts against measures to address the COVID-19 pandemic.”

I’ll leave you with this Trump tweet from yesterday, which is much less of a command than an exhortation. I assume invoking the DPA will proceed the way the rest of this crisis has, with the White House moving too slowly at first and then racing to act once the scope of the calamity becomes clearer. A week or two from now, when Andrew Cuomo is on TV insisting that New York State is out of ventilators, it’ll be invoked just to show that the federal government is doing everything possible.

Ford, General Motors and Tesla are being given the go ahead to make ventilators and other metal products, FAST! @fema Go for it auto execs, lets see how good you are? @RepMarkMeadows @GOPLeader @senatemajldr