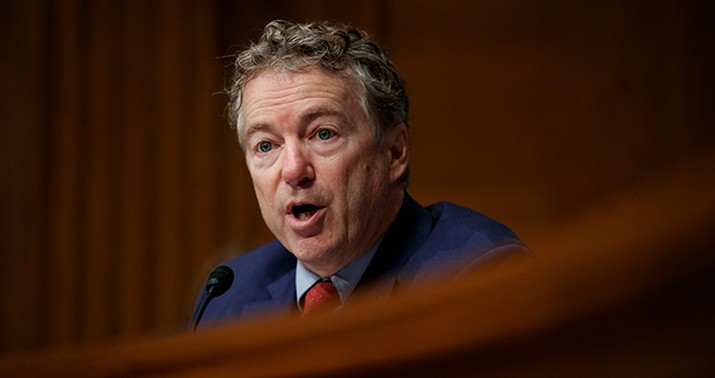 Can we all agree now that members of Congress should be allowed to vote remotely? If not, why?

He expects to be back in the Senate after his quarantine period ends and will continue to work for the people of Kentucky at this difficult time. Ten days ago, our D.C. office began operating remotely, hence virtually no staff has had contact with Senator Rand Paul.

Five Republican senators are in self-quarantine as I write this (although not every case is related to Paul), which means the GOP is momentarily at a 48/47 advantage in the chamber. If any more senators test positive, that’ll trigger another cascade of quarantines. We could be staring at a quorum problem very quickly, right in the thick of needing a massive fiscal relief package to pass ASAP.

It’s not clear when Paul got tested but it’s clear why he thought he needed to be. He was at a fundraiser in Kentucky on March 7; by March 15 local papers were reporting that several attendees had later tested positive. Why didn’t Paul immediately self-quarantine out of an abundance of caution, like Ted Cruz did after learning that someone at CPAC was infected?

Isn’t this guy a doctor by trade?

During the Senate GOP lunch today, Moran told colleagues that Rand was at the gym this morning, per two sources briefed on the lunch, and that he was swimming in the pool. Rand got his COVID-19 results back this morning.

I took a picture inside the Senate GOP lunch when the door was open Friday and saw Rand Paul seated next to other senators. He is visible in this photo. pic.twitter.com/4qwZo5YdBs

“Privately, some lawmakers were incensed that Mr. Paul had continued to circulate among colleagues when he knew he might have the virus,” notes the Times. Not so privately in some cases!

I’ve never commented about a fellow Senator’s choices/actions. Never once.

This, America, is absolutely irresponsible. You cannot be near other people while waiting for coronavirus test results. It endangers others & likely increases the spread of the virus. https://t.co/651TJf8mWf

I couldn't agree more @kyrstensinema. As we ask all Americans to sacrifice their livelihoods and alter their behavior to save lives, we must ourselves model appropriate #coronavirus behavior. No one is too important to disregard guidance to self-quarantine pending test results. https://t.co/0zQx8yrJA4

Kevin Cramer tactfully described Paul’s decision to keep showing up to work — even after being tested — as “peculiar,” saying, “He’s a physician. He’s able to do his own risk assessment, and he evidently miscalculated. People have self-quarantined for less.” Paul was on the Senate floor on Wednesday, per the Times, and was at luncheons with Senate Republicans on Thursday and Friday. Realistically, every Republican who was at those meetings should self-quarantine. But they can’t right now because the country has urgent business in Congress and McConnell won’t allow remote voting.

As I’m writing this, news is breaking:

My husband has coronavirus. I love him & not being able to be by his side is one of the hardest things about this disease. So many are going through this & much worse. I pray for him & you & meanwhile I will do all I can to get help to the American people.https://t.co/fqQU6tA29r pic.twitter.com/SjyfdQxe1R

Klobuchar’s husband began coughing up blood and is now on oxygen due to trouble breathing but she hasn’t been near him in two weeks so she isn’t being tested. She’s not the only senator who’ll need to be away from her spouse for awhile either. Mitt Romney’s one of the five Republicans in self-quarantine thanks to his exposure to Paul. His wife Ann has MS and he can’t risk passing the disease along to her, in case he has it. Hopefully he can fight it off without needing treatment if he does; Ann Romney’s odds of accomplishing that would doubtless be poorer.

.@senatorromney: "Very, very unhappy to hear that Rand Paul has been diagnosed with COVID-19. Wish him the very best. He's compromised given health conditions he's had in the past, so we'll be praying for him…all the senators are going to seek medical advice…" pic.twitter.com/tUVuaKBLMm

The weirdest detail about Paul’s cavalier insistence on carrying on with business as usual is that he had special reasons to take his possible exposure to the disease seriously. He had part of his lung removed last year due to complications from the assault by his neighbor in 2017. A respiratory illness as ferocious as COVID-19 is even more of a risk to his life than it is to the average 57-year-old’s.

What was he doing swimming in the Senate pool after being tested?

There are no answers as of this morning but the pressure on McConnell to allow remote voting is growing intense. While we wait for an explanation, here’s the president reacting yesterday to the news about Romney having to self-quarantine. Please note that he’s definitely not being sarcastic, just like I’m not being sarcastic in saying that Trump certainly doesn’t have severe personality disorders that make him much more of a liability to the country in this crisis than an asset.

Update: Here’s Paul’s statement, emphasizing that he had no direct contact with the people at the March 7 fundraiser who later tested positive. What he’s really doing here, though, is making the case for remote voting. He’s right that members of Congress are at an unusual degree of risk given how often they travel and attend mass gatherings (not to mention their average age). Who knows if Paul contracted coronavirus at that fundraiser or on a plane or at some other function? The prudent move at this point would be to send members of Congress home immediately and have them vote remotely. We don’t do prudence in government anymore, though.

“Given that my wife and I had traveled extensively during the weeks prior to COVID-19 social distancing practices, and that I am at a higher risk for serious complications from the virus due to having part of my lung removed seven months ago, I took a COVID-19 test when I arrived in D.C. last Monday. I felt that it was highly unlikely that I was positive since I have had no symptoms of the illness, nor have I had contact with anyone who has either tested positive for the virus or been sick.

“Since nearly every member of the U.S. Senate travels by plane across the country multiple times per week and attends lots of large gatherings, I believed my risk factor for exposure to the virus to be similar to that of my colleagues, especially since multiple congressional staffers on the Hill had already tested positive weeks ago.

“As for my attendance at the Speed Art Museum fundraiser on March 7, unlike the other Kentucky government officials there, I had zero contact or proximity with either of the two individuals who later announced they were positive for COVID-19. The event was a large affair of hundreds of people spread throughout the museum.

“There was an announcement by the Museum and Metro Louisville Communicable Disease department that “those who public health officials consider at higher risk from possible exposure are being notified.” Louisville’s health director put out a statement in The Courier Journal that “most of the people at the Speed Ball were at ‘very minimal risk.’” I was not considered to be at risk since I never interacted with the two individuals even from a distance and was not recommended for testing by health officials.

“I believe we need more testing immediately, even among those without symptoms. The nature of COVID-19 put me – and us all – in a Catch-22 situation. I didn’t fit the criteria for testing or quarantine. I had no symptoms and no specific encounter with a COVID-19 positive person. I had, however, traveled extensively in the U.S. and was required to continue doing so to vote in the Senate. That, together with the fact that I have a compromised lung, led me to seek testing. Despite my positive test result, I remain asymptomatic for COVID-19.

“For those who want to criticize me for lack of quarantine, realize that if the rules on testing had been followed to a tee, I would never have been tested and would still be walking around the halls of the Capitol. The current guidelines would not have called for me to get tested nor quarantined. It was my extra precaution, out of concern for my damaged lung, that led me to get tested.

“Perhaps it is too much to ask that we simply have compassion for our fellow Americans who are sick or fearful of becoming so. Thousands of people want testing. Many, like David Newman of The Walking Dead, are sick with flu symptoms and are being denied testing. This makes no sense.

“The broader the testing and the less finger-pointing we have, the better. America is strong. We are a resilient people, but we’re stronger when we stand together.”