New national and Michigan polling: Looks like Bernie has a ceiling of about 40% now 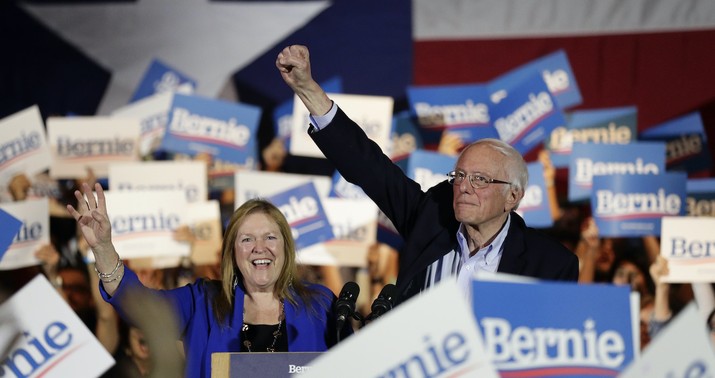 Gonna remind you up front that Biden’s game-changing win in South Carolina was … 10 days ago. He wasn’t even showing signs of life in SC polling until around February 24.

Unless the new polls miss very badly, he’s going to go from the brink of ignominious failure to runaway Democratic nominee in the span of two weeks. Not only has that never been done before, I doubt that it could feasibly be done in any shorter time period.

I wrote this morning about two of the new polls from Michigan (from the Detroit Free Press and Mitchell Research). Three more have since been published by Monmouth, YouGov, and Target-Insyght. Tell me if you see any consistency here:

The one poll showing Sanders north of 40 percent came from YouGov, which used a sample of registered voters, not likely voters.

Want national polling instead? The day after Biden’s South Carolina win, before it had reverberated among the wider Democratic electorate, Morning Consult found Bernie up three points nationally. Two days later, YouGov found Biden up four. Then another Morning Consult poll showed him ahead by eight. Then, after Buttigieg and Klobuchar bailed out, a different poll found him up 13. Then two more polls found him up by 16. And now here’s Quinnipiac, polling a de facto two-man race:

Note that, for all the hype about Biden’s strength with nonwhite voters (black voters in particular, much more so than Latinos), he’s winning comfortably with white college grads and whites without a degree. That group is supposed to be a Bernie constituency. The age demographics are revealing too. Sanders is running up the score with young adults, a vital part of his strategy, but he’s behind among middle-aged Democrats and getting obliterated among Democrats 50 and older. Bernie just can’t turn out enough kids to hold down Biden’s margins. Whether that’s because older Democrats remember the Cold War and are more suspicious of “socialism” than twentysomethings are or because they’re old enough to have 401k’s and don’t want Bernie raiding them, I leave to your speculation.

Er, wasn’t Elizabeth Warren’s exit from the race supposed to help Bernie by freeing up some progressive votes? It doesn’t seem to be doing so in any of the new polling. FiveThirtyEight has a piece this afternoon arguing that, while Sanders and Warren are similar creatures politically, their voters don’t overlap as neatly:

[P]erhaps most troubling for Sanders: He was particularly weak with one of Warren’s key demographic groups — white college-educated women — on Super Tuesday, suggesting that it might not be easy for him to draw these voters into his fold. White college-educated women weren’t Biden’s strongest group, to be sure, but he still outpaced Sanders by 15 percent points with this core piece of Warren’s base…

The exit polls also indicate that many Warren supporters aren’t making their decision on the basis of ideology alone. On the one hand, a clear majority (59 percent) of Warren voters say they want a president who will be more liberal than Barack Obama, while only 32 percent say they want a return to Obama-era status quo. That might seem like bad news for Biden, whose entire campaign pitch is a return to the Obama administration. But most Warren voters also prioritize electing someone who can beat Trump — and Biden did much better than Sanders among voters who shared that sentiment. Only 30 percent of Warren supporters said they prefer a candidate who agrees with them on the issues over one who has a good chance of winning in the general election, while 67 percent say their main priority is to choose a candidate who can beat Trump.

Biden won the largest share of white women college grads on Super Tuesday, 36 percent, but Warren was second at 28 percent and Bernie a distant third at 21 percent. Presumably Joe’s inheriting most of that group from Warren, forcing Sanders to try to pile up votes elsewhere. As for Warren fans putting a premium on electability, Quinnipiac’s new poll had big numbers on that point too: Fully 80 percent of Dems say it’s at least somewhat likely Biden would beat Trump versus just 61 percent who say the same of Sanders. Biden also has a higher favorable rating than Sanders, notching a 45/40 split versus Bernie’s 40/46. Why Sanders is underwater is unclear; maybe it’s a simple matter of people concluding that he’s no longer viable.

if electability is the key to Biden’s comeback, which I think it is given the freakish burst of support he got after he finally proved in South Carolina that he could win somewhere, then polling showing him running up the margins against Trump head to hear should only further entice undecideds to back him over Bernie. In Quinnipiac today, Biden leads Trump by 11 (52/41) while Bernie leads by just seven (49/42). More notably, Biden leads Trump by seven (48/41) in Monmouth’s poll of Michigan, a key swing state, while Sanders leads by just five (46/41). Nearly 60 percent of Dems there say beating Trump in November is more important to them in choosing a candidate than any policy concern. It’s pretty clear that Joe’s running away with things now because of widespread perceptions that he’s more likely to win this fall than Bernie is. And since nothing’s happened since Super Tuesday to alter that perception — apart from Bernie fans straining to convince voters that Biden is senile — we should expect Joementum to continue tomorrow night.

By the way, that 52/41 deficit against Biden that Quinnipiac measured for Trump also comes with a 54/42 approval rating on the economy and a not-terribly-bad 43/49 approval on how he’s handling the coronavirus so far. (Among independents it’s 37/50.) Those numbers are apt to worsen in the next poll in light of events. If the White House succeeds in slowing the spread of the disease and preventing hospitals from being overtaxed, Trump stands to get a lot of credit. But that’s what it’s going to take, measurable progress on actually solving the problem. Tweeting “hey, the flu is pretty bad too” won’t hack it: Already, 56 percent say Biden would handle a crisis better than Trump would.

Sanders, a 78-year-old man with an underlying health condition, qualifies as an at-risk person for Coronavirus.

Asked what he’s doing to protect his health, Sanders makes a joke and basically says he’s too busy running for president to worry about it, so, lol.

I hope for Bernie’s own sake that he gets routed tomorrow night and can wrap up the campaign before it puts him at real risk.

Exit question: Should states start moving towards universal voting-by-mail, just in case COVID-19 makes it too risky to go to the polls this fall? I loathe early voting but early voting is better than people staying home en masse because they’re afraid of getting sick.