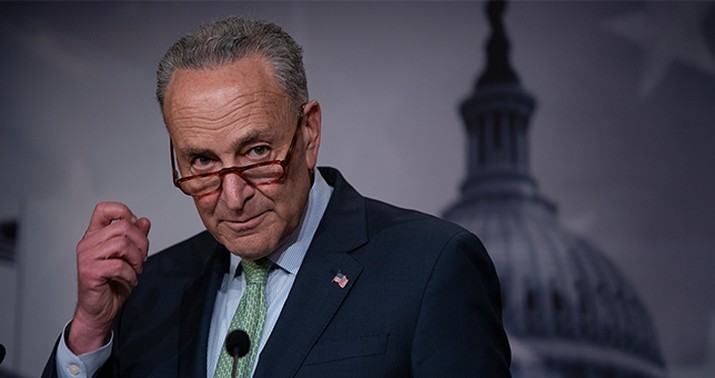 Fifteen in all so far, including lead author Josh Hawley.

Not to be outdone, Ted Cruz is not only co-sponsoring the resolution but turned it into a gimmick to build an email list for his next campaign. One notable omission from the sponsors is Trump pal Lindsey Graham, who was asked today by CNN if he’ll support it and said … no:

Graham, a close ally of President Donald Trump, explained that his position on the issue is, in part, because Schumer walked back his remarks, but also because it could lead to Democrats attacking Trump.

“I don’t want to start censuring everybody,” the South Carolina Republican said, later adding, “If we start censuring him, they’re going to want to censure Trump, and this stuff never ends.”

Schumer richly deserves censure for what he said but yeah, I think Graham’s right to see the censure effort quickly turning into a days-long effort by Democrats and their media friends to revisit every dubious thing Trump’s said and done that hasn’t earned censure — or even polite criticism — by the Republican majority. There’s a new Pew poll out tonight that asked people how they feel about the way he conducts himself as president. Even among Republicans, just 31 percent said they like it versus 50 percent who have mixed feelings and 16 percent who dislike it. Among the overall public those numbers were 15/30/53. Fertile ground for a “tu quoque” push by Dems.

And so not a can of worms Lindsey wants to open up. Neither does Mitch McConnell, I’m guessing, but maybe he’ll let the resolution come to the floor to make Democrats squirm for a few days by having to answer for what Schumer said. A short national debate on whether Trump is or maybe isn’t more obnoxious than the most powerful Democrat in the Senate isn’t a bad outcome for the GOP. I wonder, though, if he thinks the vote will cause headaches for Susan Collins or Cory Gardner in their Senate races this year, in which case he’s going to block it. Besides, Dems can always justify voting no despite how gross Schumer’s comments were on grounds that he very weakly semi-apologized this morning.

A key bit from the resolution:

It specifically cites statistics of violence against the judiciary, including 4,542 “threats and inappropriate communications” that were investigated in 2018, and four federal judges that have been murdered since 1979…

It also uses Schumer’s own past words condemning threats.

“Senator Schumer has acknowledged that threatening statements can increase the dangers of violence against government officials when he stated on June 15, 2017, following the attempted murder of several elected Members of Congress, ‘We would all be wise to reflect on the importance of civility in our [N]ation’s politics’ and that ‘the level of nastiness, vitriol, and hate that has seeped into our politics must be excised,” the resolution reads.

Andrew Napolitano picked up on the same point this morning, as you’ll see below. It’s not that Schumer meant Gorsuch or Kavanaugh any harm, it’s the fact that there are doubtless would-be James Hodgkinsons out there who already strongly dislike them and whose fragile minds might understand “you will pay the price” differently from how Putzhead meant it. Assuming he even meant it differently, I mean.

Turns out a lot of you believe in Bigfoot

But not as many as those who believe in aliens

Rose McGowan: Here are the questions the NY Times sent to Tara Reade

“Now you can all see their tactics & how far they will go.”

The Red Pill Goes to Court

Film review: Is Capone a quarantine offer you can refuse?

California allowing the churches to reopen… sort of