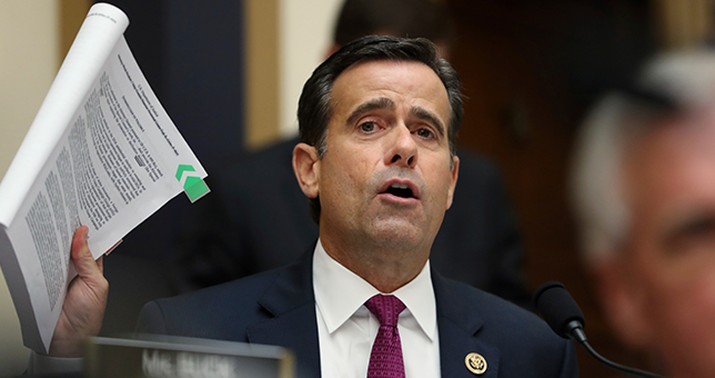 I appreciate the raw cunning of this move, even if the cynicism of it grosses me out.

I am pleased to announce the nomination of @RepRatcliffe (Congressman John Ratcliffe) to be Director of National Intelligence (DNI). Would have completed process earlier, but John wanted to wait until after IG Report was finished. John is an outstanding man of great talent!

Here’s how I’d rank the sort of person a president should want as DNI, in descending order:

Shorthand for number three would be “yes man,” the sort of person who, if the intelligence says one thing and the president says something else because political advantage requires him to do so, decides that the president’s version is the truth. Note that this is distinct from “loyalty.” Trump deserves someone who won’t backbite him in the media, anonymously or otherwise; he needs to be able to trust his deputies to function effectively and clearly he doesn’t trust them many of them right now, sometimes for good reasons, sometimes not. But there’s a difference between loyalty and being a yes man.

The concern about Ratcliffe is that he’s not just a yes man but is being chosen *because* he’s a yes man. He was nominated for this job once before, you may recall, seemingly for no better reason than that he’s an aggressive advocate for Trump during Intelligence Committee hearings. He doesn’t have any field intel experience, just what he’s gleaned in five years as a member of the Homeland Security and (later) Intelligence Committees, plus some limited work on terrorism cases when he was a U.S. Attorney. (He was accused last year of padding his resume on that point.) That’s why he ultimately withdrew last summer: Even Senate Republicans were concerned that he had been nominated not because there’s good reason to think he’d be effective in the job but because he’d be a yes man, the sort of person who’d eagerly carry out political vendettas for Trump against “disloyal” intelligence deputies and clean up, or even suppress, intel that the president found “unhelpful.” Richard Burr, the chairman of the Senate Intelligence Committee, reportedly dialed up Trump last summer and urged him to rethink the Ratcliffe nomination.

In naming Texas Rep. John Ratcliffe to be Director of National Intelligence, Trump ignored a warning from Republican Sen. Richard Burr, the chairman of the intelligence committee, according to Congressional aides familiar with the matter. Burr told the White House last week that the move would inject more partisan politics into the work of the intelligence agencies, said the sources, who requested anonymity because they were not authorized to speak on the matter.

Last year it looked like Ratcliffe would be DOA in a confirmation hearing, so he withdrew. The Senate’s composition hasn’t changed meaningfully since then so presumably he’s still DOA. So why renominate him?

Here’s where the cunning comes in. Trump knows that this is an election year. He knows that his approval rating, both within his own party and across the population, is about as high right now as it’s ever been. (Coronavirus may change that soon, but never mind.) He knows that Republican voters just circled the wagons around him on impeachment and are ready to circle those same wagons tighter as we proceed towards the general election. All of that being so, Senate Republicans may be materially less likely to cross him on Ratcliffe’s nomination now than they were eight months ago. Does Romney want to cast another “traitorous” vote against Trump so soon after the Senate trial? Does Susan Collins want to piss him off with his voters in Maine watching her closely? Does Burr want to cause a rift with the president in North Carolina, one of the most important swing states this fall?

The odds of the Senate meekly confirming Ratcliffe have improved and Trump knows it. So he’s calling their bluff. I dare you to reject him.

But here’s where it gets even more cunning. Trump may be viewing this, correctly, as a “heads I win, tails I win” situation thanks to a loophole in federal law on executive branch vacancies. The law was written in the belief that presidents would always prefer permanent appointees as a matter of basic stability and sound constitutional practice. You want someone at DNI or DHS or HHS or wherever? Just send the nomination over to the Senate and they’ll vote up or down. And until Trump, presidents did approach the matter that way. Trump doesn’t care about stability, though; if anything, he appears to enjoy volatility in government. He seems to prefer acting directors since they can be shuffled around according to his whims. They may even be more prone to behaving like yes men than permanent appointees are because there’s a chance that the president will formally nominate them to the permanent position if they’re especially obsequious.

What does this have to do with Ratcliffe’s appointment, you say? Aha:

Even if there's no real chance that @RepRatcliffe will be confirmed by the Senate, the formal submission of his nomination will allow @RichardGrenell to continue to serve as Acting DNI past March 11 — and for another 210 days _after_ Ratcliffe's rejection or withdrawal. https://t.co/jQ3R4dWHeb

Read the statute yourself. He named Ric Grenell acting DNI a few weeks ago with the promise that he’d nominate a permanent candidate before March 11. That was the date Grenell’s term would have ended under the Federal Vacancies Reform Act if Trump hadn’t nominated a full-time replacement. He’s done that now — with someone who may or may not be confirmable. If the Senate confirms Ratcliffe, great for Trump. He has his yes man. If the Senate rejects Ratcliffe, no problem for Trump: He gets another seven months of service in the job from Grenell, who has himself been accused by Democrats of being a yes man appointed by Trump to carry out vendettas and politicize inconvenient intelligence as needed. I think the jury’s out on Grenell given the olive branch he extended a few days ago to Shelby Pierson, the briefer who reportedly erroneously told Schiff’s committee last week that Russia is trying to get Trump reelected. But in hindsight, it was revealing that Grenell would reach out to Pierson given his supposedly short, temporary term in the DNI role. Why would a guy set to exit the position 12 days from now have felt obliged to take any action, formal or otherwise, on Pierson? Why not let the permanent DNI handle it?

Probable answer: Because Grenell knew Trump was planning to play a shell game with the Senate in which a possibly unconfirmable person would be nominated in order to buy him another seven months in the job.

All of this is cynical, as I say, but a clever exploitation of the rules. One of the very first things Congress should do once Trump is gone and it’s once again safe for congressional Republicans to kinda sorta care about basic civics is to drastically rein in the executive’s power to shuffle around acting directors. It’s a blatant end-around the Senate’s own power to approve cabinet officials; we may be stuck with Grenell as DNI until October even though the Senate will have never exercised its advise-and-consent prerogatives over his nomination to the intel position. (The Senate did confirm him as ambassador to Germany, a starkly different role.) They should revise the laws, let me stress. I don’t think they actually will revise them since our congressional leaders are timorous garbage who are happy to see their powers gradually sapped by a succession of increasingly powerful presidents. These chumps will deserve it when President Bernie decides to follow Trump’s lead and play musical chairs involving “acting” roles with an exciting array of unconfirmed, and unconfirmable, hard-left dipsh*ts.