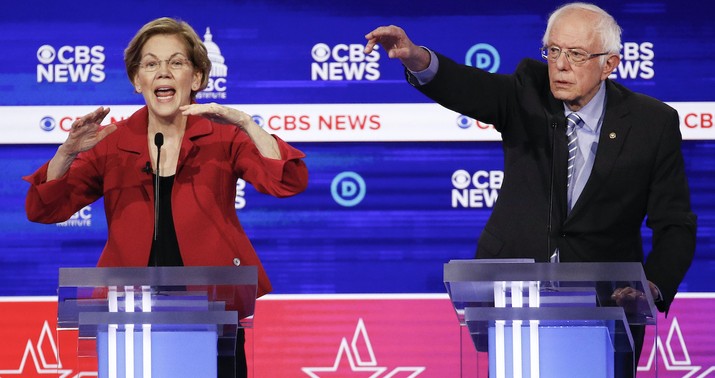 I admire his ruthlessness here. Well, maybe “ruthlessness” is too strong. What he’s doing is perfectly rational, not vindictive.

But after Warren spent the entire campaign lamely pulling her punches against him, even after she’d clearly sunk to a distant second in the “progressive lane” of the race and needed to shake things up, it’s gratifying to see him go for the throat. You want to win? Then play to win.

Now, in the run-up to the March 3 primary, Sanders is going all in on his bid to pick off Massachusetts, culminating in a four-day music and canvassing festival in Worcester that begins Friday…

Losing a home state primary doesn’t necessarily spell the end of the campaign for presidential hopefuls. But it’s both a humbling result and a sign of weakness that has caused some candidates — like Republican Marco Rubio in the 2016 GOP primary — to drop out. Others have ended their campaigns before risking a home state defeat and risking damage to their future political prospects…

Sensing an opportunity to deal a serious blow here to his top progressive rival, Sanders has events planned across the state in the final days before the primary, starting with the Worcester festival his campaign has taken to calling “Berniepalooza.” He will hold a rally in Springfield on Friday, the largest city in Western Massachusetts, followed by a rally on the Boston Common on Saturday.

You could also understand it if Bernie were uncompetitive in those larger states. No sense spending time in California and Texas if they’re out of reach; focus instead on states where victory is plausible. But both of those states — and many more — are winnable on Tuesday, per Nate Silver’s latest model of win probabilities.

UPDATED Super Tuesday win probabilities, where you can see the impact of Biden's good polling in SC & other Southern states. Bernie looks as good as ever outside the South.

Texas, North Carolina, Virginia, Minnesota, Oklahoma, and Arkansas are all very much in play. In every case except one, it’s Joe Biden, not Elizabeth Warren, who’s Bernie’s chief competition. (The one exception is Amy Klobuchar in Minesota, not Warren.) Bernie’s win probability in Massachusetts is higher right now than it is in any of those other states, a strong argument that he should be spending time elsewhere this weekend. In fact, a new poll of MA out today shows him surging ahead of Warren after being statistically tied last week, even before “Berniepalooza” has begun:

The poll shows Sanders is the choice of 25% of likely Democratic primary voters, while Warren is in second place with 17%. The former mayors, Pete Buttigieg and Michael Bloomberg, are in a virtual tie for third at 14% and 13%, respectively. Former Vice President Joe Biden rounds out the top five at 9%…

The Warren campaign is working hard in Massachusetts, understanding full well that a loss at home would be devastating to a presidential bid trying to regain its footing.

A week ago it was Sanders 21, Warren 20. One could even argue that Bernie’s time would be better spent this weekend in California, a state he’s already all but guaranteed to win, since running up the score there could mean an even richer windfall of delegates from the most delegate-rich state on the map.

Instead he’s in Massachusetts. Why? Because he’s trying to take Warren out, of course. She’s been talking tough lately about staying in the race until the convention but that depends entirely on her financial supply chain. If Bernie can convince Warren donors that she’s hopeless, the money dries up and the Warren campaign collapses. Running up the score in her own state should demoralize her fans and convince them to give up on her, with many then moving on to Bernie himself as their second-favorite progressive in the race. And there may be some urgency here: Warren’s strong debate performance last week in Nevada brought a revival in her fundraising, and lately she’s begun to benefit from big, big bucks being poured into a Super PAC that’s running ads on her behalf. (She famously refused to accept Super PAC help during the campaign until about a week ago, realizing that she was dunzo if she didn’t.) The odds of a Warren comeback are very long but the more encouragement, and money, she receives the more progressive votes she’ll continue to hoard from Bernie in primaries to come, even if she never reenters the top tier of the race.

So he’s going for the throat. Beat her on her home field, watch her supporters close their wallets, then watch her campaign die. Sanders becomes the only left-wing game in town.

I’m skeptical that she’ll still be in the race after Tuesday, but who knows? Maybe she really has convinced herself that she’s going to somehow emerge as a compromise candidate at a brokered convention once Sanders and Biden deadlock, as if the Berniebros wouldn’t burn down the building if she tried to usurp him. Possibly she’ll run as long as she can just to keep her name and face in front of Democratic voters. Exit question: Um, who’s funding that Super PAC for her? I know that our very, very populist senator from Massachusetts would recoil at the thought of being bankrolled by a billionaire.