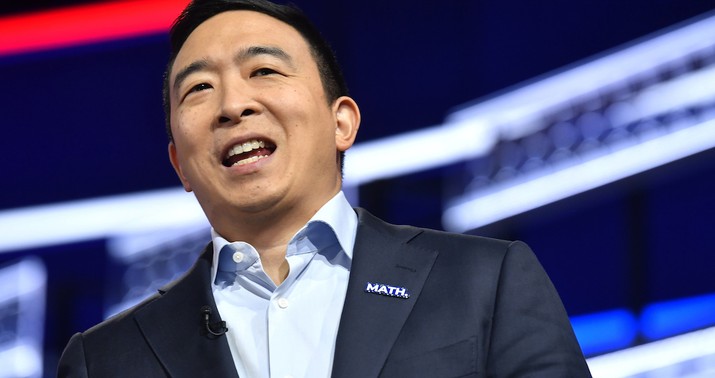 What the hell is this?

Ted Cruz at least waited until he was facing dire straits against Trump before pulling a panicky stunt involving an early VP selection. Bloomberg hasn’t even officially competed anywhere yet.

If this really happened, I bet it was less an earnest attempt to feel out Yang on the VP slot than it was a bit of half-hearted sweet talk to try to earn his endorsement. “Back Mike and your name will be entered into our official vice-presidential raffle.”

Michael Bloomberg’s presidential campaign has made overtures to Democrat Andrew Yang, courting the former candidate’s endorsement and floating the possibility of Mr. Yang becoming his running mate, according to two people familiar with the discussions.

Aides to the former New York City mayor reached out to discuss ways the two entrepreneurs-turned-politicians could work together as Mr. Bloomberg seeks the Democratic nomination, these people said.

Mr. Yang, who dropped out of the race earlier this month, didn’t commit to join forces, as he considers his own political future, a third person familiar with the discussions said.

Mr. Yang didn’t immediately respond to a request for comment. A senior Bloomberg aide said Mr. Yang wasn’t being seriously considered to be the former mayor’s running mate if he secured the nomination.

Yang got just five percent on the first alignment in Iowa and not quite three percent in New Hampshire, spurring him to throw in the towel and become … a CNN contributor, surely the most dismal of fates for a former presidential contender. His endorsement wouldn’t do much to reverse Bloomberg’s downward trajectory. And as personally likable as Yang is, I wouldn’t consider it a selling point for a 78-year-old presidential candidate to have a guy one heartbeat away who’s never held office of any kind and whose signature proposal is to somehow give every American $1,000 per month.

Which is a long way of saying: Why does Bloomberg even want Yang’s support? Is he just desperate for a vote of confidence right now, even from someone with only a small-ish political following? Conceivably he’s seeking Yang’s support for the same reason he’s been reaching out to Joe Biden’s donors and seeking their backing — not because he needs it (certainly he doesn’t need donations) but because he’s looking to deprive the rest of the field of it. From Bloomberg’s perspective, if Yang’s eventually going to endorse, better that he endorse Mike than anyone else.

If there’s anything more to it than that, I suspect he’s eager to have surrogates on the trail for him now that the race is opening up into multistate election days. Every other serious candidate who’s running has friends and endorsers whom they can dispatch to rally voters in states where they can’t be: Bernie has AOC, Warren has Julian Castro, and so on. Bloomberg has no one like that. Yang is also an old pro at barnstorming by now, having just wrapped a national campaign of his own, so he wouldn’t miss a beat getting back on the trail for Mike. He’s a reasonably good fit for Bloomberg’s “brand” too, a guy who made his bones outside politics and who ran more as a problem-solver than an ideologue.

One thing about this idea does intrigue me, though. After Yang flamed out of the race, rumors started circulating that there’s another job he might have his eye on. One which Mike Bloomberg would know something about.

Shortly after Yang dropped his long-shot presidential bid, Democratic consultants and other operatives throughout the Big Apple were buzzing about him potentially running for New York City mayor in 2021.

“It’s a natural next step,” a city-based Democratic consultant told The Post when asked about a potential Yang mayoral candidacy. “With the notoriety and following he’s gathered, he has to be taken seriously.”

Apart from pure name recognition, I’m not sure why a guy whose One Big Idea is UBI is an intriguing candidate for mayor of New York, but lord knows he can only be an improvement over the tool who has the job now. I think that’s what’s really in it for Yang if he decides to back Bloomberg — not the VP slot but lots of goodwill from a thrice-elected mayor of NYC and his gigantic network of friends and advisors, all of whom would be helpful in building a mayoral campaign next year. If Bloomy was headed up in the polls instead of down, it might even make sense for Yang to hop aboard at this point: Even if the mayoral idea doesn’t pan out, he’d be in line for some sort of federal government position if Bloomberg won. As it is, it’s an open question at the moment how much longer Bloomberg will be in the race if he disappoints next Tuesday and continues to slide in polling afterward. Yang may want to hold back, see how the vote goes next week, and then see if it’s worth endorsing.