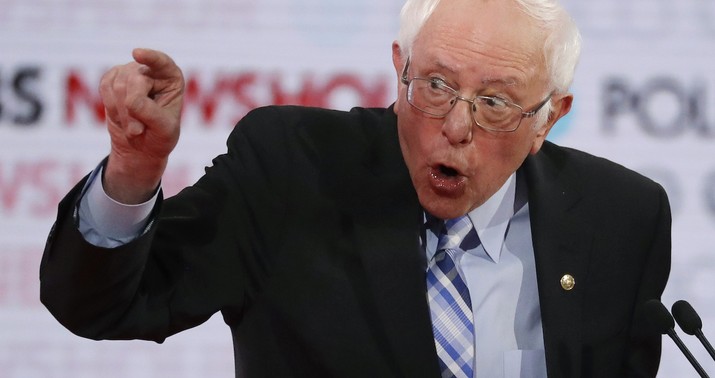 If you’ve avoided the Democratic debates until now, here’s your — likely — last chance to watch one that counts. The next debate won’t happen until March 15, long after the Super Tuesday states will have voted. Bernie will be there; Mike Bloomberg will almost certainly be there; Pete Buttigieg will *probably* be there.

But that may be it. If the Sanders express rolls through South Carolina on Saturday, taking out Biden and Tom Steyer, and then speeds to a bunch of victories seven days from now on Super Tuesday, that’s probably it for Warren and Klobuchar. Mayor Pete might stick around a bit longer, enticed by the prospect of a three-way debate where he’d be the clear middle option between the socialist Bernie and the plutocrat Bloomy. But unless something happens to change the trajectory of the primary tonight and on Saturday, when South Carolina votes, that mid-March debate won’t matter. Bernie will be home free.

So tonight, effectively, is the last stand for everyone except Bloomberg. And mostly for Bloomberg too.

After many, many months of debates, it’s also the first time Sanders will take hard shots from a variety of challengers. Bloomberg already telegraphed his approach tonight with a pair of new ads yesterday: He’s going to nuke Bernie while doing his best to fend off new attacks from Warren and Sanders himself. The two centrist also-rans, Buttigieg and Klobuchar, also have an incentive to lay Bernie out. They squabbled onstage at the last debate, each hoping they’d break from the centrist pack somehow by doing so, and they failed miserably. Tonight I assume they’ll try to break from the pack again by distinguishing themselves as the moderate who’s most effective at taking the fight to Sanders. Buttigieg has already begun jabbing at him for believing in “an inflexible, ideological revolution that leaves out most Democrats, not to mention most Americans.” Does Pete want to go all-in on that tonight and risk making an enemy of the presumptive nominee and the broader left, especially with his entire political career still in front of him? Maybe he thinks the smarter play is to hang back, let Bloomberg do the dirty work in trying to hurt Sanders, and hope to reap the benefits among Democratic voters turned off by the negativity between those two.

I think that’s Warren’s strategy tonight too. Blowing up Bloomberg at the last debate was the best moment she’s had as a candidate in months, both in terms of buzz and fundraising. She’ll double down at this debate, pressing him again on whether he’ll release all the women he’s signed to NDAs from their agreements with him, not just the three he identified last week who’ve signed agreements with his company. Warren can’t hit Bernie hard despite his frontrunner status because her only path to the nomination at this point, realistically, is as the compromise candidate at a brokered convention. If she nukes him, she’ll alienate the left and destroy her “compromise” appeal. Every other candidate onstage will be tearing Bernie down. It’s pointless for her to join in.

As for poor Joe Biden, he’s the only candidate who can’t afford to think big-picture by gaming out the race in Super Tuesday and beyond. There’s no Super Tuesday for Joe if he loses South Carolina, and there’s little chance of Joe doing well on Super Tuesday even if he wins South Carolina but by a disappointing margin. He’ll hit Bernie tonight with everything he can think of that might run up the score in that one particular state. That’s why he rolled out that ad yesterday accusing Sanders of disloyalty to “our first African-American president,” as the narrator emphasized, when Bernie allegedly contemplated a primary challenge to O in 2012. In a state where the Democratic electorate is ~60 percent black, accusing someone of having undermined Obama is a potentially potent attack line. I expect we’ll hear even more than usual from Joe tonight about his good friend Barack and how he alone is fit to carry the Obama mantle going forward.

But as high as the stakes are for Biden, and as certain as it is that Bernie will take the brunt of the hits, the make-or-break candidate is Bloomberg. His performance last week was so bad that his staffers took to apologizing publicly for their failure to prepare him adequately. He can undo that bad first impression if he’s effective tonight in attacking Sanders and holding off Warren; if he fails, viewers will come away believing that he’s all hype, more the figurehead in a vast ad agency than a politician with actual policy ideas. Which would be ironic, since Bloomberg is certainly the biggest private-sector success and arguably even the biggest public-sector success onstage.

The debate airs on CBS at 8 p.m. ET. I wonder which candidates will dare to slug Bernie over his Castro apologetics before an audience of left-leaning viewers. Bloomberg’s already come after him for it and Buttigieg was critical of him about it in a town hall last night, although more so from the standpoint of electability than moral objection to what Sanders said. While we wait, enjoy this little side-by-side that’s making the rounds. Biden may carry the Obama mantle but Pete is the Obama clone.

So it turns out Pete Buttigieg is just blatantly plagiarizing Barack Obama. Cmon man at least come up woth your own platitudes…pic.twitter.com/o4qIxTcqQV