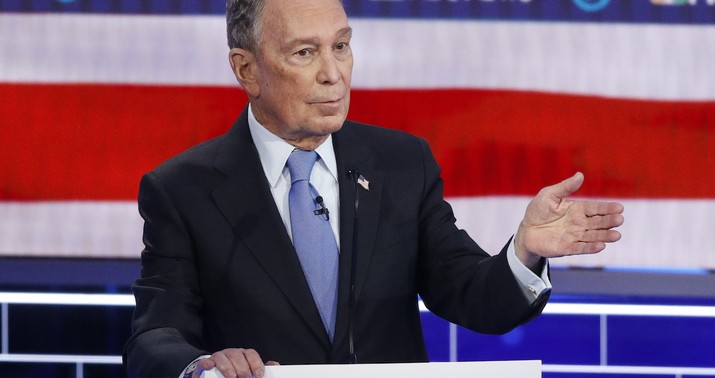 I was skeptical that the attacks did him much damage, especially Warren’s well-executed fusillade over his NDAs with women employees. (I mean, look who we elected president.) But maybe it wasn’t the attacks per se that wounded him as much as his own feebleness in fending them off. The appeal of Bloomberg to undecided Dems is as The Trump-Slayer, the guy whom you may not like personally and certainly don’t like politically but who may be singularly capable by dint of wealth and managerial acumen to blow up the Trump Death Star. If Bloomy had looked commanding onstage it may have bolstered those perceptions, making the debate a net gain for him despite all the punches that landed.

Instead it diminished him. Instead of the Great and Powerful Oz that’s on TV everywhere, it was the little man behind the curtain.

Have we already seen Peak Bloomberg? Per Morning Consult, maybe:

The bottom hasn’t fallen out, but look at those net numbers on the far right side. In a two-man race, with Bernie as the only alternative, maybe Bloomy could shake this off and trust that jitters about socialism would force wary undecideds to hold their noses and vote for him anyway. In a six-man race, with a logjam in the center lane, this might be enough to keep Bloomberg bunched up with Biden and Buttigieg and maybe even Warren on Super Tuesday. Which will all but ensure Bernie Sanders’s eventual nomination.

In fact, in MC’s national poll of the race today, Bloomberg’s the only candidate whose overall support changed in a statistically significant way after the debate. He was in second place at 20 percent beforehand; now he’s in third at 17 percent, with Warren having gained two points and creeping up behind him in fourth at 12. Bernie, the obvious winner given the competition’s reluctance to hit him, also rose two points to top the field at 30 percent.

Democrats have 11 days to derail the Sanders express. Bloomberg’s debate debut may have been their last chance to shift momentum to a candidate with the wherewithal to do that.

The former New York mayor’s generally panned performance delivered relief to Trump allies who had worried for weeks that Bloomberg’s unconventional approach to the Democratic primaries, combined with his seemingly infinite war chest, could pose a serious threat. Instead, Bloomberg spent his first 2020 debate getting reamed by opponents making the case that the billionaire presidential candidate had no home inside the modern Democratic party.

Even beyond Bloomberg, Trump allies found themselves delighting in a circular firing squad across the field of Democratic candidates vying for attention.

“Only Democrats could squander two hours of a national prime-time broadcast to drop opposition research on each other,” said a person close to the campaign. “This whole cycle is turning out better than anyone could have imagined.”

I’ll say this much for Bloomberg: He’s the only candidate running who seems willing to swing hard at Bernie. Up to and including blaming him and his fans for vandalizing Bloomberg campaign properties based on … no evidence at all.

Bloomberg camp says its office in Knoxville was vandalized and "it echoes language from the Sanders campaign and its supporters." pic.twitter.com/SZZS1ixzL5

What was the “language” used by Bernie that was “echoed” in this incident? If it was stuff objecting to a Wall Street plutocrat attempting to buy a political party’s presidential nomination, I have bad news, boys: The pool of suspects is, um, literally everyone.

Here’s Warren at a CNN town hall last night milking her big moment at the debate for everything it’s worth. Interestingly, Bloomberg announced this afternoon that he’d release the three women who signed NDAs with his company — his company, not him — over the past 30 years if they want to be released. I’m thinking Warren might come back to this issue at the next debate anyway. Exit question: Why did conservative Democrats’ opinion of Bloomberg slightly improve in the data above while everyone else’s opinion of him fell? My guess is that they appreciated his zinger at Bernie about being a socialist who owns three homes and/or they viewed the dust-up over Bloomberg’s NDAs as a case of political correctness gone too far, with Bloomy being punished for having told a few ribald “jokes” in the office. What he’s accused of goes way beyond jokes, but that’s how he tried to spin it at the debate.

This is it. The clip. Amazing.pic.twitter.com/oo39PAhveZ