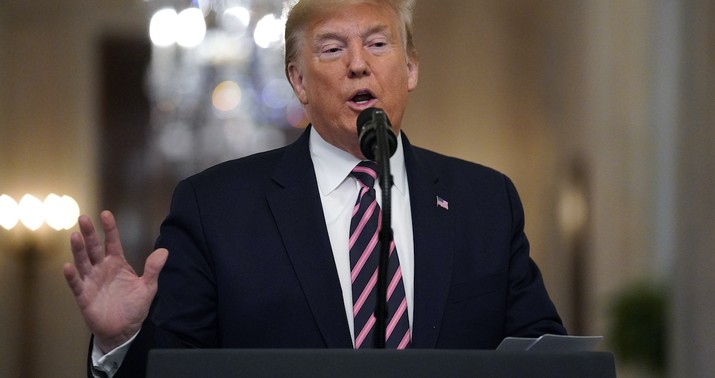 Such is the stench from Trump granting clemency to his corrupt former “Apprentice” crony that even GOPers from deep-red jurisdiction are scrambling to run away from it today. Darin LaHood represents an R+15 district while John Shimkus hails from one that’s R+21, the sort of numbers that normally deter a Republican from criticizing the president. Not this time. They’ll risk a few nasty Trump tweets in the interest of making sure voters back home don’t detect their fingerprints on this turd of a commutation.

In fact, they might even welcome those tweets. “Disloyal Republicans from Illinois thought my move on Blagojevich sucked!” would be a nice message for these guys coming from Trump given that like 70-80 percent of the public is destined to conclude that it sucked as well.

Imagine the statements they’ll issue after the Roger Stone pardon, which should be along any day now.

Ben Shapiro made me laugh with this:

Everyone: Only Trump can beat Trump
Trump: https://t.co/7m4GiukCPd

Blagojevich, a Democrat, was impeached 114-1 by the House and removed as governor 59-0 by the Senate in the deeply Democratic state of Illinois. Even his own party didn’t want his stink on them. Trump’s happy to bathe in it.

He’s spoken before about potentially commuting Blago’s prison sentence, tweeting about its alleged unjustness long before he was involved in politics, but not until today did he finally make his move. How come? It could be that Blago was fresh in his mind after having recently kissed his ass, publishing an op-ed in Newsmax on New Year’s Day entitled “House Democrats Would Have Impeached Lincoln.” (Newsmax identified him in the piece, tersely, as “the 40th governor of Illinois, 2003-09.”) He wouldn’t be the first beneficiary of clemency in the Trump era to have written his way into the president’s good graces: Conrad Black has championed Trump with a Hannity-esque fervor in op-eds over the past few years and was rewarded last May with a pardon for the charges of obstruction of justice and fraud of which he was convicted in 2007.

Stone’s probably already drafted a few columns about how America’s future depends on a Trump victory this fall that he plans to give to Breitbart or American Greatness, just in case the president drags his feet on that pardon.

I also think Trump went on a clemency spree partly as a post-impeachment victory present to himself and partly out of frustration that his boy Bill Barr isn’t delivering the sort of revenge for him that he was hired to deliver. BuzzFeed noted in its story today about the Blago pardon this old Trump quote from August:

“He’s been in jail for seven years over a phone call where nothing happens — over a phone call, which he shouldn’t have said what he said, but it was braggadocio, you would say,” Trump said. “I would think that there have been many politicians — I’m not one of them, by the way — that have said a lot worse over the telephone.” (Blagojevich was, in fact, convicted on the basis of multiple pieces of evidence, not a single phone call.)

He just got done with his own political ordeal stemming from a supposedly “perfect phone call.” Maybe he wanted to make a point about not overreacting to what politicians say on the phone by springing a guy from prison who, uh, used it to try to sell a Senate appointment. Trump also complained today about that the conviction of Blagojevich was “a prosecution by the same people, Comey, Fitzpatrick — the same group” that came after him for Russiagate. There were reports circulating last week after Barr waded into the Stone sentencing fiasco that Trump was angry that his enemies, most notably James Comey, had yet to face any charges for their conduct during the Russia probe while his friends, like Stone and Mike Flynn, were being sent to prison. That anger got worse after the DOJ’s surprising decision not to charge Andrew McCabe. Today’s Blago clemency might have been Trump’s way of “balancing the scales” by undoing some of the DOJ’s previous success against other Trump allies. My theory on why Barr barged into the Stone matter was that he was trying to make amends to Trump for not having convicted any of his antagonists; Barr can’t manufacture evidence of guilt beyond a reasonable doubt out of thin air but he can certainly encourage leniency for Trump’s cronies. The Blago/Milken/Kerik stuff is Trump’s twist on that. As president, he doesn’t need to ask for leniency. He can order it. Stone will be next.