Unexpected: Poll shows Bernie winning one-on-one races with every other Democrat in the field 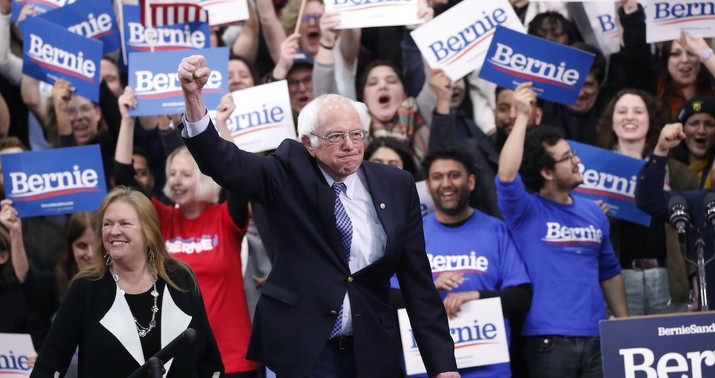 This isn’t supposed to happen according to the conventional wisdom. Bernie’s progressive fan base constitutes a third or so of the party, we’re told, possibly 40 percent on a good day. Low ceiling! Which means the task for centrists is (theoretically) simple: Unite behind one candidate and watch that guy or gal steamroll Sanders, 60/40, in state after state.

But it’s not that simple, is it? That was also the game plan for the GOP establishment four years ago at this time against Trump and we know how that worked out. Getting centrists to unite behind one person is easier said than done. On top of that, not every voter who prefers centrist candidate A necessarily also prefers centrist candidate B as their second choice over the populist outsider in the race. Doubtless there are many working-class Joe Biden supporters who’d take Bernie over Pete Buttigieg if forced to choose, for instance.

Making it worse, momentum is real. Stopping Bernie by uniting behind a moderate when he’s only won two states is a straightforward plan. Stopping him after he’s won three of the four early states plus the lion’s share of Super Tuesday states is more complicated. As a matter of pure delegate math, the Democrats’ proportional system makes it exceedingly difficult even in a two-man race for the candidate who’s trailing to make up the gap. He’d have to win consistently by wide margins.

But worst of all, per this new YouGov/Yahoo News poll, it may not even be true that a moderate champion would lead Bernie one-on-one if that match could be engineered. To the contrary:

I believe it, but there are at least three caveats.

1. Bernie must have an advantage to some degree in terms of pure name recognition over most of the candidates there. He’s the only person on the board who ran for president in 2016 and he just won the first two states. The one guy more famous than he is, Joe Biden, just suffered a pair of demoralizing losses in Iowa and New Hampshire — and yet he’s still competitive here with Sanders. What would these numbers look like if someone else won Nevada and South Carolina, and/or the majority of states on Super Tuesday?

2. One of Sanders’s opponents has a mountain of money earmarked to introduce him to the public in states holding elections soon and, potentially, to start tearing down opponents like Bernie. Let’s see what these numbers look like after Bloomberg runs $50 million in ads calling Bernie a commie symp with citations. Or, maybe more effectively, $50 million in ads explaining to confused Democrats that “Medicare for All” means the end of their private health insurance and a big middle-class tax hike. The Free Beacon noticed that Bernie didn’t do so well in the three counties in Iowa with the highest percentage of voters who have private insurance. Bloomberg can and will weaponize that.

Regardless, only 35 percent of Americans said they would even consider voting in a general election for a candidate who called themselves a “democratic socialist.” Forty-six percent said no, while another 18 percent said they weren’t sure. Among independents, those numbers were even less favorable to Sanders: 31 percent yes, 47 percent no and 22 percent not sure. Meanwhile, most Americans (52 percent) said only “some” or “a few” of their peers would consider voting for a democratic socialist.

In the poll, no other candidate characteristic seemed to have such a strong negative effect on electability.

It’s a problem for him. But look — given the dire straits in which Biden and Warren now find themselves and the deep hole Buttigieg and Klobuchar are in per the data above, it may well be that no one except Bloomberg can realistically compete with Sanders going forward by matching him in money and organization. And we shouldn’t count too heavily on Bloomy either: This same poll found him trailing every Democrat in the race head-to-head, and not narrowly either. His closest competitor was Klobuchar, who leads him by five points. Whether that’s because a lot of Democrats haven’t paid Bloomberg any attention yet or because they *have* but decided against nominating a plutocratic Wall Street former Republican is unclear. But if it’s the latter then Bernie looks unstoppable.

Speaking of which, we got our first poll of Nevada in more than a month this morning. Guess who’s leading.

That’s not a bad showing for Joe, who told donors last night that he expects to finish first or second in Nevada and then to win South Carolina. A close second to Bernie in NV would finally give him some semi-encouraging buzz; in light of the results here, and considering his potential strength with Latino voters, he looks to have a shot at pulling it off. The question is how he goes forward and out-competes two well-funded candidates in Sanders and Bloomberg plus a determined Pete Buttigieg. Ads are airing in Super Tuesday states now. How is Biden going to avert being swamped?

By the way, here’s what the betting market on a brokered convention looks like today over at PredictIt:

More likely than not! Here’s Bernie a few nights ago warning that it would be very divisive indeed for a candidate who won a plurality of delegates not to be awarded the nomination at a contested convention. Oddly, when he was the runner-up a few years ago, he felt differently.

Bernie w/ a bit of a warning shot, tells @chrishayes it would be "very divisive" if a candidate gets a clear plurality but not majority of the delegates and the party doesn't nominate that person at the convention. pic.twitter.com/2i3Ei1EXo0