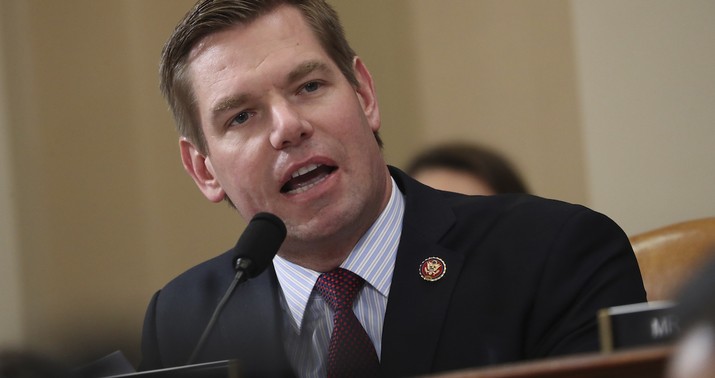 What’s “insane,” Chris, is that investigative journalists still haven’t solved the mystery of who farted during that Swalwell appearance on MSNBC last fall.

But yes, wanting to impeach Trump again this year is insane too. Like I said on Wednesday, you only get one shot at it. Among their endless list of complaints about Trump, the Ukraine quid pro quo is the one Democrats chose to elevate as uniquely troubling, worthy of the highest sanction the House can deliver. There’s an argument that that was a shrewd choice politically, especially knowing that they’d never get 20 Republican votes to remove in the Senate no matter what grounds for impeachment they offered. By going to the mat on Ukraine and framing Trump’s interest in Burisma as a form of illicit interference in the election, Dems may have made the public more sensitive to further attempts to invite foreign meddling. Byron York’s right that impeachment probably won’t matter in November — unless there’s another Ukraine-style incident and Democrats get to say, “We told you so. He’s using the leverage of his office to play dirty tricks with the election.” Then maybe impeachment, specifically the GOP’s refusal to take the Ukraine charges more seriously, has more legs.

Or maybe not. Either way, the point is that whatever ends up happening with the Barr/DOJ/Roger Stone fiasco, impeachment of the president isn’t on the menu. Someone tell Swalwell:

“We’re not going to take our options off the table. We don’t wake up in the morning wanting to impeach him, you know,” Swalwell said. “We want to work with him on prescription drugs, background checks, and infrastructure, but we are not going to let him just torch this democracy because he thinks that he’s been let off once and we’re not going to do something about it.”

Yeah, you are, said Wallace today on Fox Radio:

“When you’re hearing people like Eric Swalwell say, ‘Well, maybe we’re going to impeach again.’ [It’s] Insane, just insane,” Wallace told host Chris Foster. “You know, both sides need to focus on actually helping people deal with the problems … that they face in this country. Whether it’s the economy or jobs or education or health care or foreign policy, whatever. They need to be focusing on that and not, you know, staying in this kind of politics of personal destruction.”…

“It seems to me that most people in this country, the last thing they want to do is go down this road again,” Wallace said. “And we seem to be headed, not necessarily to impeachment, but down this road of the president doing things that are very questionable. I think weighing in on the sentencing — it wasn’t a guideline — it was a recommendation by prosecutors. And then the recommendation gets changed and now he’s attacking the judge. I think that’s all really misguided on his part.”

That’s exactly what Pelosi’s afraid of, and what she was afraid of even before impeachment over Ukraine got traction in the House last fall. Trump’s already dubbed her party the “do-nothing Democrats”; they’ve passed a raft of lefty legislation but all of it’s obviously DOA in the Senate. They have little to show for their House majority thus far except for one thing, and that one thing was never popular outside their own party. Imagine them doubling down on it as the Democratic nominee is trying to get screen time to talk about health care. It is, indeed, “insane.”

And other Democrats know it, even if Swalwell doesn’t. Hakeem Jeffries, one of the impeachment managers and a rising star in the caucus, was asked by GQ if a second impeachment was on the table. “In my view, no,” he said. “It’s in the hands of the American people at this point to decide the fate of Donald Trump.” I’m sure Madam Speaker agrees.

Except that, to some degree, they’re at the mercy of events. Probably nothing could force their hands on a second impeachment but if they haul in the four prosecutors who withdrew from the Roger Stone case in protest and those four offer evidence of political meddling by Barr to protect Trump’s buddy, that’s a sticky political problem. They can’t just ignore those witnesses either and decline to investigate; they’ll have to do some basic oversight of the matter as the media howls about it. What would they do if the probe turns up evidence of wrongdoing? Impeach Barr? I think they’d run into the same “do-nothing Democrats” problem there even though it wouldn’t be Trump in their crosshairs.

I think they’d censure Barr and/or Trump in the hope/expectation that taking that action might force the Senate to consider censure too. That’d be a tough vote for Susan Collins, Lisa Murkowski, Martha McSally and the rest of the crew from the Ukraine trial who voted to acquit Trump but said belatedly that what he did was inappropriate and that they hoped he learned from it. The stakes with censure are much lower than they are with impeachment, making it easier for centrist Republicans to vote yes, but Trump and his fans would still bitterly resent being formally reprimanded. What would Collins et al. do?

Here’s Wallace on Swalwell’s insanity, at around the 22:30 mark.