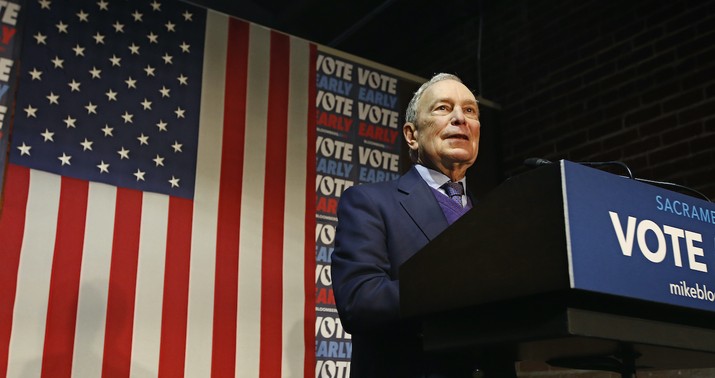 Winner gets the honor of losing badly to Trump in November when half of his own party stays home in protest.

National polls mean less than state polls, of course, but they’re a useful snapshot of where the entire Democratic electorate is at a given moment. And they’re illuminating in what they can reveal about trends in opinion. There’s been one shining trend in national polling since last April that’s been almost unbroken in nine months, despite dozens of polls having been taken over that period. Biden always leads. Or almost always; there have been a handful of polls since last spring that have showed a different frontrunner. Normally, though, come rain or shine, no matter what’s going on in Iowa or New Hampshire, Grandpa Joe retains his pride of place on the national leaderboard. His consistency in national polling is a key reason why so many data nerds have continued to give him solid chances of winning the nomination even as his polling in Iowa and New Hampshire slipped. The national electorate wants Joe, and in a long 50-state race one might assume that the national electorate will get its way.

But what if the national electorate no longer wants Joe? What if, hypothetically, Democrats nationally were choosing Joe because they’d bought the hype that he was the most electable choice on the menu? And once they had hard evidence from Iowa (and, soon, New Hampshire) that he wasn’t, their interest in him evaporated overnight?

To appreciate how unusual it is for Biden to trail nationally, let alone by eight points, you need to scroll through RCP’s archives of national polls dating back many months. He trailed Bernie recently in a couple of polls by one and three points, respectively, and last fall during the Warren surge he trailed her in a few — once by seven. An eight-point deficit is extremely rare air for him. And Quinnipiac knows what’s causing it: “Biden no longer dominates on the key question of electability, as 27 percent say Biden has the best chance of winning against Donald Trump in the 2020 presidential election, while 24 percent say Sanders, 17 percent say Bloomberg, and 9 percent say Buttigieg.”

A month ago Joe led 44/19 on that crucial metric. If he finishes fifth in New Hampshire tomorrow night, which is now a distinct possibility, what will the electability numbers in next month’s poll look like?

Sure looks Democratic voters are about to hit the gong and usher Biden offstage for good.

But that’s half the story. The other half, of course, is Mike Bloomberg’s surge into the top three, past Iowa co-winner Pete Buttigieg. A month ago he was at just eight percent but has nearly doubled that share in just a few weeks thanks to Joe’s crapola performance in Iowa. A poor Biden finish tomorrow night may well end up boosting Bloomberg into second(!) nationally; in fact, he’s already second nationally among Democratic moderates, trailing Biden 22/21.

The number political junkies are oohing and ahhing over this afternoon, though, is Bloomberg’s share of the black vote in the table above. Bloomy’s supposed to be doomed among black voters because of his long support for stop-and-frisk policies as mayor of New York. He only finally recanted on the issue once his campaign was revving up. It was assumed that black voters would turn their backs on him, leaving him as hopeless in blue states with large black populations as Pete Buttigieg appears to be. Instead he’s pulling 22 percent among African-American voters, good for a close second behind Biden, who’s most definitely finished if his lock on the black vote breaks. If Quinnipiac’s numbers are right, it looks like there’s a large chunk of black Dems out there who aren’t crazy about Bernie and will join with whichever Democrat seems best positioned to beat Trump. For nine months that was Biden. Now suddenly it isn’t. The black vote may be in play, which is endgame for Joe and a lifeline for Bloomberg.

At least until Bernie starts running ads about stop-and-frisk in key states.

One more data point on Bloomberg’s perceived electability: He now leads Trump 51/42 head-to-head, the best mark in the field. Bernie is second at 51/43. Biden, the “electable” candidate, stands at 50/43, only a point better than Amy Klobuchar. Here’s a table that grabbed my eye from the crosstabs of that hypothetical “Bloomberg vs. Trump” race, asking supporters of various other Democratic candidates whom they’d vote for if presented with that choice in November:

Fans of Biden, Buttigieg, and Warren are all very comfortable with voting for Bloomberg. Bernie fans are less comfortable, but way more comfortable than I would have expected given his pedigree as a Wall Street billionaire and former Republican. By comparison, fewer than 90 percent of Biden, Sanders, and Bloomberg supporters said they’d vote for Pete Buttigieg against Trump. In fact, Bloomberg voters typically were more finicky towards the other candidates vis-a-vis Trump than fans of those other candidates were towards Bloomberg himself. Make of that what you will. But maybe Bloomberg’s ubiquitous ad campaign has reached even very casual Dem-leaning voters who otherwise might not bother with the election (at least right now) if not for him.

What if Bloomberg’s money, not just Bernie’s radical chic, is a turnout engine?

And what if Bloomy’s rivals can’t quite break through with voters to change their newly formed opinions about him once they’re competing directly with him on Super Tuesday?

Same way in NYC/DC in 2016 assumption was rest of the country knew Trump’s record in business vs Apprentice, Bloomberg record as mayor remains unknown + being mostly ignored by rivals means he tells his story with his $ the way he wants. https://t.co/sLCsRr8poM

Trump was impervious to attacks because his TV-honed image as a business genius was part of pop culture by the time he ran in 2015. Bloomberg might be impervious to attacks because, when push comes to shove, he can smother them with his own ad barrage. Who are you going to believe, one Bernie ad touting experts claiming that stop-and-frisk was a racially discriminatory policy that didn’t do anything to stop crime or 8,000 Bloomberg ads touting NYC’s years-long decline in crime with a variety of black Bloomberg-supporting residents attesting to what a great mayor he was?

I’m trying to imagine now what the ideal Mike Bloomberg result from New Hampshire tomorrow night might be. He wants Bernie to win, of course; the path to a Bloomy nomination requires a fear of socialism rising. Having Buttigieg, Klobuchar, and Biden place second, third, and fourth also works for him since it’ll ensure that the centrist muddle drags on for another week or two, forcing moderate Dems to look to him as a guy who might sort this out for them. He’s quite likely to get that result per the latest polling.

“…he had lost the ability to speak.”

President Trump sends letter to Sen. Chuck Schumer: 'I never realized how bad a Senator you are'

Analyst Discovers a Major Flaw in IHME Model Used by White House; Actual Numbers are a Fraction of Expected

“If China’s leaders are willing to stop telling lies about us, we can pause pointing out the most embarrassing truths about them.”

What? Navy fires captain who sent letter pleading for help for sailors infected with coronavirus