Dem Sen. Sherrod Brown: Privately Republicans tell me they know what Trump did was wrong 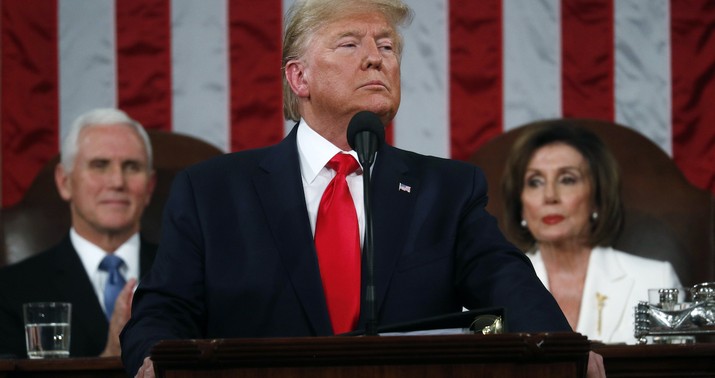 This is amusing just because of the populist dilemma it presents.

On the one hand, it’s laughable for a lib like Brown to ask righties to believe him, as he’s obviously trying to sow suspicion in the ranks with this claim.

On the other hand, badmouthing Trump privately to the Democrats sounds exactly like the sort of thing those backstabbing RINO establishmentarians in the Senate would do.

He’s probably telling the truth, as the media’s been reporting for ages how Republicans on the Hill tend to speak differently about Trump once they’re off the record. It’s a contributing factor to the president’s obsession with loyalty, I assume: He knows they’re not bound to him by ideological sympathy or personal respect so the blunt force object of fear becomes a way to keep them in line. Lotta fear in the Senate lately, Brown claims, reminding readers how much offense GOPers pretended to take after Adam Schiff noted a media report about their heads ending up on pikes if they voted the wrong way on impeachment.

For the stay-in-office-at-all-cost representatives and senators, fear is the motivator. They are afraid that Mr. Trump might give them a nickname like “Low Energy Jeb” and “Lyin’ Ted,” or that he might tweet about their disloyalty. Or — worst of all — that he might come to their state to campaign against them in the Republican primary. They worry:

“Will the hosts on Fox attack me?”

“Will the mouthpieces on talk radio go after me?”

“Will the Twitter trolls turn their followers against me?”

My colleagues know they all just might. There’s an old Russian proverb: The tallest blade of grass is the first cut by the scythe. In private, many of my colleagues agree that the president is reckless and unfit. They admit his lies. And they acknowledge what he did was wrong. They know this president has done things Richard Nixon never did. And they know that more damning evidence is likely to come out.

I wonder if this is Romney’s ace in the hole in the Senate. If his colleagues start dogging him publicly, maybe leaks start appearing in the paper alleging that some of his critics have been singing a different tune about the president privately. Remember that even a servant as loyal as Kevin McCarthy once said in 2016, “There’s two people I think Putin pays: Rohrabacher and Trump,” before later going on to become House minority leader and a presidential favorite. Maybe some senators fear that an annoyed, frustrated Mitt will go loose cannon in telling tales if he’s brutalized as a sellout. Or maybe simple shame will hold back the ones who’ve admitted privately that Romney’s right on the merits in the Ukraine matter. It’s one thing not to vote with him out of fear, it’s another thing to demagogue him for his vote because you lack the same amount of guts.

And by far the most significant Senate vote of the Trump era before this was….the party's 2008 nominee https://t.co/TtIj4bDUQw

Yeah, that can’t be a coincidence. McCain cast the fateful vote against repealing ObamaCare in 2017, now Romney casts a much less consequential but still dramatic vote on impeachment. You can read that synchronicity however you like. To Team Trump, it’s further evidence that Republican pols who couldn’t achieve what he did in 2016 bear him a grudge and sought to punish him out of jealousy. That’s a tricky argument to make with McCain, though, since he was personally defeated by Bush in the 2000 primary and then went on to become a tireless defender of the Iraq war that Bush launched. Romney only has a year in the Senate under his belt but he’s stuck with Trump on judges and other matters. If you’re looking for petty personal motives to justify their opposition on momentous votes, you’re better off believing that they hold Trump’s character against him and let it improperly infect their political judgment. Although that’s tricky in Romney’s case since character assessments are destined to inform a judgment about whether the president committed wrongdoing in an impeachment inquiry.

Maybe they’re just old-school Republicans who can’t tolerate that the new populist school has supplanted them? Or maybe they voted on the merits in both cases, not because they have special objection to Trump but because they each enjoyed a sort of “elder statesman” role in the party by dint of their presidential campaigns that emboldened them to defy him. It’s not that Romney has a grudge, maybe, as that he feels a tiny bit freer to cross Trump than the people who are whispering to Sherrod Brown do.

Dan Foster ably sketches the rules for Senate Republicans under Trump. There’s really only one rule; obey that one and you don’t need to worry about crossing him on anything else.

Rand Paul votes against POTUS 1/3 of the time but names the whistleblower like it's the circle game, because he understands the same thing Lee does.

The only way that you get to have any other beliefs as a Republican in Washington is if you publicly affirm this one belief. By running afoul of that Romney has likely ruined any chance he had of influencing the caucus.

Emphasis on “marginally” in Graham’s case. Romney broke the one important rule by declaring today that Trump was guilty of significant wrongdoing and so now he’s a bizarro version of Paul. Rand can be as disloyal to the president on policy as he likes because he’s loyal to him personally. Romney is disloyal to Trump personally and therefore no amount of loyalty on policy will atone.

Here’s Tim Scott confirming for CNN this afternoon that the president will, er, not be apologizing tomorrow. Nor will any Senate Republicans be demanding that he do so, although Susan Collins pitifully allowed today that she “hopes” he does. An interesting detail noted by CNN reporter Kaitlan Collins this afternoon, meanwhile: Mike Pence claimed in an interview recently that Trump would be acquitted on a bipartisan vote, which ended up not being true. Had Manchin or Jones or Sinema told the White House privately that they were prepared to acquit, only to switch their votes to remove once Romney gave them cover? Maybe the Republicans whispering to Sherrod Brown aren’t the only ones saying one thing behind closed doors and something different in public.

Republican Sen. Tim Scott on if Trump should be apologetic about the Ukraine call: "The president will not be apologetic. He does not see the same facts that I do. I think he thinks it was a perfect call. … I don't know that you should expect anything different" pic.twitter.com/wyufZtMK0v

WOW: Paul Sperry triggers TF out of Eric Holder by tweeting about connection between US Atty. who closed McCabe case and Obama

“She said she needed to get papers for her brother to go to school.”