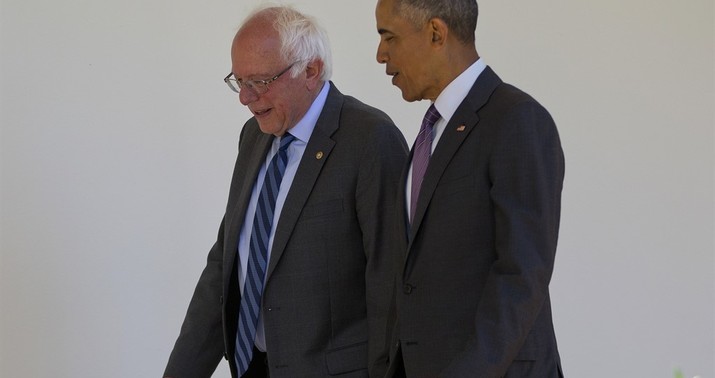 I don’t buy it but I’m happy to do my part to stoke a Democratic civil war by promoting this tweet from Fox Business correspondent Charles Gasparino.

SCOOP: Dem Party sources who have spoken w @BarackObama say former prez is growing increasingly anxious about @BernieSanders rise in the national polls & where the avowed socialist would take the country; he is considering a public statement addressing it more now @FoxBusiness

Just doesn’t sound like O. I think he’s worried about his legacy in a party that’s drifting left and doesn’t want to antagonize the younger generation of Bernie-friendly Democrats. He’s already taken some knocks during this primary for his comparative centrism relative to the DSA agenda. ObamaCare was supposed to be a momentous accomplishment but some progressives treat it as a momentous betrayal, a giveaway to corporate America when a bolder left-wing president might have pushed for a bigger government role in health care.

There’s enough residual loyalty to Obama among Democrats that Bernie and other leftist stars like AOC have to be respectful (publicly, at least) of his record. But if O joins the battle to try to thwart the great socialist hope when he’s on the brink of an historic victory, the gloves will come off. Either Bernie will win the nomination anyway, proving that Obama’s lost his grip on the party, or O will make lifelong enemies of the Berniebros, who’ll do what they can to make sure history isn’t kind to his achievements.

He’d rather stay out of this primary. But can he afford to? He said this in November:

In an unusual address to a room of wealthy Democratic donors, Obama urged Democratic candidates to be pragmatic in their messages to voters. While he didn’t mention any specific presidential primary candidate or proposal, Obama warned that the average American voter does not align with views from “certain left-leaning Twitter feeds or the activist wing of our party.”…

“Even as we push the envelope and we are bold in our vision we also have to be rooted in reality,” Obama said. “The average American doesn’t think we have to completely tear down the system and remake it.”

Hmmmm. A few days after he made those comments, Politico published this piece:

Publicly, he has been clear that he won’t intervene in the primary for or against a candidate, unless he believed there was some egregious attack. “I can’t even imagine with this field how bad it would have to be for him to say something,” said a close adviser. Instead, he sees his role as providing guardrails to keep the process from getting too ugly and to unite the party when the nominee is clear. There is one potential exception: Back when Sanders seemed like more of a threat than he does now, Obama said privately that if Bernie were running away with the nomination, Obama would speak up to stop him. (Asked about that, a spokesperson for Obama pointed out that Obama recently said he would support and campaign for whoever the Democratic nominee is.)…

When it comes to Sanders, I asked one close adviser whether Obama would really lay himself on the line to prevent a Sanders nomination. “I can’t really confirm that,” the adviser said. “He hasn’t said that directly to me. The only reason I’m hesitating at all is because, yeah, if Bernie were running away with it, I think maybe we would all have to say something. But I don’t think that’s likely. It’s not happening.” (Another close Obama friend said, “Bernie’s not a Democrat.”)

He’s not “running away with the nomination” yet but he could be three weeks from now if IA and NH come through for him. And once we’re at that point, it might be too late for Obama to influence events by speaking up. Logically, Gasparino’s right. If O really does fear a Sanders nomination then the time to say something is now, when late deciders in the early states are making up their minds.

And if he does choose to say something, the question will be asked: Why doesn’t he just endorse Biden? If he says something vague and anodyne about how voters should carefully consider “electability” in a veiled shot at Bernie, that message might not be received by the voters he’s targeting. Even if it is received, some Sanders supporters will simply reply that Bernie is the most electable candidate in the field, the guy whose strength with younger adults will mobilize new voters to turn out and whose strength with working-class whites will reclaim some of the swing voters whose support for Trump was decisive in 2016. If Obama thinks Biden is the party’s best chance he should say so clearly, leaving no doubt. Does he dare?

I’m thinking … no, probably not:

Not surprising but I guess worth reporting: actual sources in Obama world are giving a collective LOL to the idea that he is considering putting out a statement warning against Bernie.

Gasparino’s tweet may be part of an effort by some anti-Bernie Dems in the party to pressure Obama into speaking up against Sanders. Leak the fact that he’s allegedly thinking about it, then wait for some of his centrist buddies to find out and call him up and say, “Are you really thinking of doing this? Because you should.” Maybe they can talk him into it. But probably not.

Exit quotation from Obama crony Jim Messina, who once cheered Donald Trump’s nomination in the expectation that Clinton couldn’t lose to him: “I think it is clear to me, with these swing voters I care about, the Trump — Obama voters in midwestern states, Bernie Sanders is not the candidate we need to beat Donald Trump in November.”

Pete Buttigieg Starts Cancelling Events, Is He About to Head Home to South Bend?

America should reject both nationalism and socialism