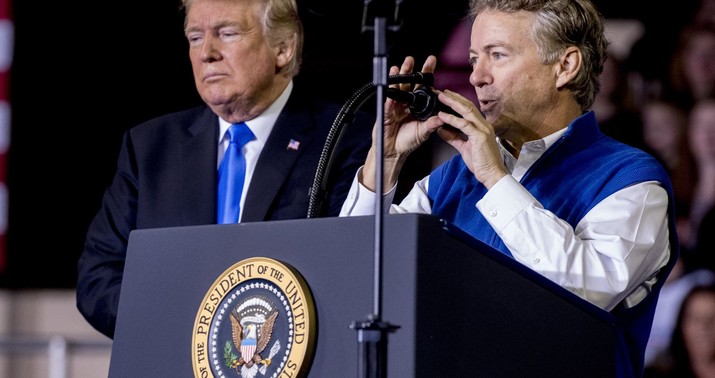 I’m pretty sure Susan Collins and the rest of the centrists already understand that reciprocity will be demanded in calling witnesses.

In fact, thanks to Lev Parnas, they’re not only facing one hard decision now on whether to call witnesses, they’re facing two. If they join Schumer on calling Parnas and John Bolton, they’ll have to give Trump two witnesses in exchange. Hunter Biden is the first, obviously. The second remains to be determined.

Rand sounds agitated about this, which is strange for a guy from a red state whose populist cred is not in doubt and who doesn’t face voters again until 2022. Either he really believes in reciprocity on the merits or he’s alarmed by Trump’s hawkish turn towards Iran and is eager to reassert his influence over the president by showing him that he’ll be every bit as loyal on impeachment as superhawk Lindsey Graham will, if not more so.

Paul says if four or more of his GOP colleagues join with Democrats to entertain new witness testimony, he will make the Senate vote on subpoenaing the president’s preferred witnesses, including Hunter Biden and the whistleblower who revealed the Ukraine scandal — polarizing picks who moderate Republicans aren’t eager to call. So he has a simple message for his party: end the trial before witnesses are called.

If “some Republicans help Democrats get witnesses and there are no witnesses for the president, I think the end result is a revolutionary tide against those people,” Paul said. “I can’t imagine that [Trump] will let it go by if someone votes to bring in witnesses that his administration isn’t interested in.”

Politico makes two good points on how to understand Paul’s threat. First, he isn’t being as confrontational with the Collins crew as he could have been. He could have forced a vote on a motion to dismiss the articles of impeachment at the start of the trial, which would put the centrists on the spot by forcing them to go on record in believing that it should proceed — against Trump’s wishes. That would irritate their MAGA constituents back home. Paul says he won’t demand that vote because he knows it has no chance of passing. A vote on calling Hunter Biden as a witness might, so that’s worth doing.

The other key point is that Rand doesn’t really want to call Biden. The goal of his threat is deterrence, not full nuclear release. He wants Collins et al. to think hard in advance about the potential cost of voting with Democrats to call Bolton and/or Parnas and conclude that maaaaaybe it’d be better if no witnesses at all were called. In a way it’s doing Collins a favor by offering her a pretext to vote no on the Dem witnesses: “I’d like to hear from John Bolton and Lev Parnas but members of my caucus are threatening to turn the trial into a circus with tangential witnesses if I vote to call them, and I can’t allow that to happen in good conscience.”

Except that won’t work, will it? Collins could always cowboy up and vote to call Bolton and Parnas while voting against calling Hunter Biden or whoever. She can’t be Rand’s hostage unless she agrees to be one, which is a bad look for a senator who’ll be running next fall on the message that she’s an “independent voice” in Washington. Besides, although Senate Republicans aren’t keen on hearing from Biden, there’s no great risk to calling him. He’s already admitted in interviews that he probably got his seat on the Burisma board because of his last name. He’s certainly not going to clear Joe of corruption suspicions, even if he doesn’t provide Trump’s defense with any evidence to confirm them. The whole country’s going to watch his testimony and come away thinking, “This guy is a textbook case of swampy nepotism.” No harm done to the GOP.

One GOP lawmaker, Sen. John Cornyn of Texas, suggested that Biden’s testimony would not help senators resolve the primary question raised by the trial. “I suffer from a legal education and about 20 years’ experience as a lawyer and a judge. I view it through that frame,” he said. “This is about who has material evidence on a disputed question of fact that is charged by the articles of impeachment. To me, that’s the way I approach that.”

I wonder if McConnell’s quietly trying to work out a deal with Collins, Gardner, Romney, Murkowski, and Trump to make it easier for Collins and Gardner to vote however they need to on calling individual witnesses. Collins and Gardner are the two most vulnerable Republicans next fall so they’re the two who most need to be protected. Conveniently, the GOP can afford to lose two members on each individual floor vote during the trial. If McConnell can convince Romney and Murkowski to stick with the team on, say, calling Hunter Biden, he could engineer a 51/49 vote in which Hunter is called but Collins and Gardner each get to vote no in hopes of impressing swing voters that they were interested in only the most relevant witnesses. Trump, meanwhile, would need to be convinced not to attack Collins and Gardner for their disloyalty in casting that vote, which shouldn’t be hard considering that they’ll both end up voting to acquit him.

Here’s Paul yesterday insisting on recripocity with witnesses. Tit for tat — or no witnesses at all, which is what he’d prefer.